Occurring nearly simultaneously in separate courtrooms, the developments were the most dramatic yet in the ongoing investigation into Russian interference in the 2016 US elections.

But do they pose an existential risk to Trump’s presidency? This obviously depends how special counsel Robert Mueller’s investigation continues to develop in Washington. But in terms of how damaging Tuesday’s events are for Trump, there are competing schools of thought.

Things are looking bad for Trump

The Manafort verdict was the first time Mueller’s investigation has been tested in court. Trump has spent months deriding this “witch-hunt” against him, but even witches get a trial and Manafort largely, though not completely, lost his.

Manafort was convicted of eight of the 18 charges he faced relating to tax and bank fraud with his personal finances. Manafort was Trump’s campaign manager in 2016, though his crimes largely predate that three-month tenure. While Manafort’s convictions are not directly related to Mueller’s probe into Russian interference in the 2016 elections, the impression the Trump campaign was staffed by white-collar criminals is now much stronger. 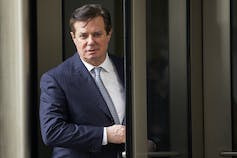 Paul Manafort, outside a Washington court in February. Shawn Thew/EPA

Manafort was also in the pay of a Russian-backed leader in Ukraine, former President Viktor Yanukovych. When Yanukovych was ousted from office in 2014, that source of income dried up, forcing Manafort to find new and nefarious ways to support his lavish lifestyle.

Read more: Q+A: Why is Paul Manafort on trial and what does it mean for Donald Trump?

The problem for Trump is the possible nexus between himself, Manafort and Putin that Manafort’s guilty verdicts could expose. That will likely be tested when the former campaign chair goes on trial in Washington next month for his alleged crimes linked to his Ukraine consultancy.

Cohen’s plea bargain also makes a possible charge against Trump more stickable. Importantly, Cohen has gone further than anyone else in directly implicating Trump as a co-conspirator in some of his actions. If Trump did authorise his former personal lawyer to pay off women with whom he had had extramarital affairs and told him to do so in order not to derail his 2016 presidential campaign, he may be guilty of campaign finance violations, at the very least. 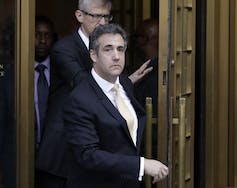 Together, the legal travails of Manafort and Cohen bring the Mueller investigation into the White House. It has so far just been banging on the windows. Trump has been able to skirt the malfeasance of his former advisors through the court of public opinion. The problem is that the United States is a government of laws and of actual courts that bully-pulpit tweets cannot indefinitely protect him from.

This won’t hurt Trump that much (at least, not yet)

Trump has earned a sort of immunity by profusion. He commits so many faux pas, is politically incorrect so often, skirts potential legal issues so frequently, that no one transgression ever seems to stick.

Former President Richard Nixon committed one clear crime and paid the price. But what is Trump actually guilty of? Having dubious business and political associates? What president hasn’t had those?

Read more: A friendly reminder: impeaching Donald Trump will not remove him from office

Sexual relations with women other than his wife? Bill Clinton did as much and is regarded as one of the most successful presidents of recent years.

Trump’s supporters also don’t care about any of this. Many see the trials of Manafort and Cohen as the elite going after Trumps’s associates because they can’t land a glove on their hero. 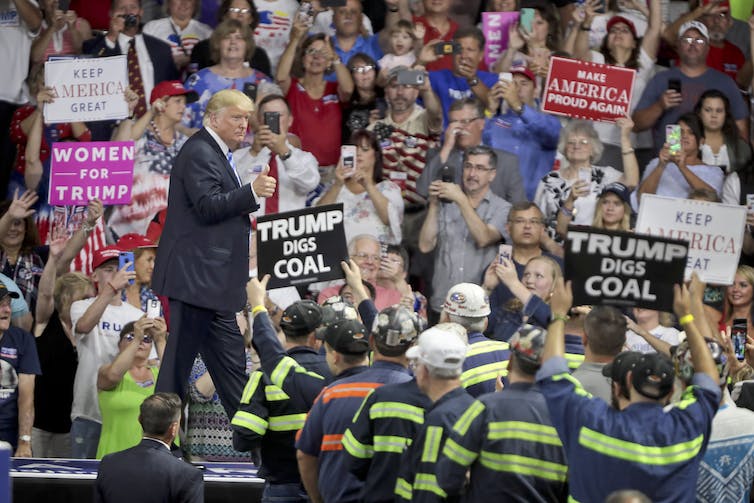 Trump at a rally Tuesday in West Virginia, where his poll numbers remain high. Mark Lyons/EPA

This popular sentiment is a vital currency for the Trump administration. He has thus far remained enormously popular with his base, despite the gathering legal clouds. He is particularly adept at exploiting his victim-in-chief status. The most powerful man in the world is protected in the court of public opinion by his victimhood – a remarkable state of affairs.

And another important point: there is still no clear crime that would make Trump impeachable. There is still not enough in the Manafort verdict and Cohen plea bargain to force Republicans to desert the man on whom their fortunes in the November midterm elections (and beyond) depend.

American politics is about to become even more partisan and personal because the legal stakes have just gotten higher. Are they high enough to end the Trump presidency, though? Probably not. There is some way to go and many more days in court before we can answer that with any confidence.