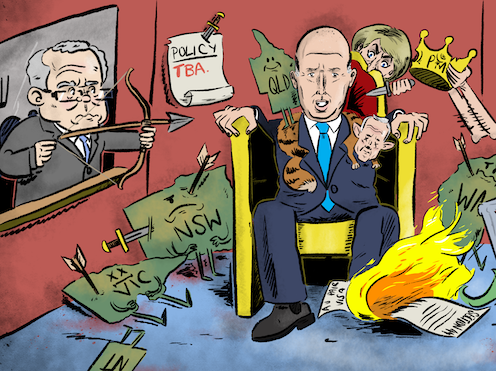 Tolstoy’s famous remark in Anna Karenina may well apply to political parties: “Happy families are all alike; every unhappy family is unhappy in its own way.”

It certainly applies to spills. Each unhappy event is unique in its particular combination of ambition, rancour and absurdity. But the present debacle contains so many wheels within wheels that it is virtually impossible to imagine anyone being able to keep all of them in view at once.

Yesterday’s shutting down of the House of Representatives was one result. It is arguably the worst debauching of Australian parliamentary democracy since John Kerr refused to see the Speaker to receive the House’s no confidence motion in the Fraser Government on November 11, 1975.

The Liberal Party gained office, but would pay the price for its misdeeds. The Coalition’s decision to exploit its numbers yesterday to shut down the House because it had become an inconvenience is also likely to live on in infamy as the tawdry, desperate act of a failed government.

The problem of the numbers in the House is an example one of the moving parts that have made this leadership contest the messiest in Australian history.

The Liberal Party has run the spill as if it were a political billionaire; in other words, as if it had a 30-seat majority in the House of Representatives. It doesn’t. It is already within a whisker of becoming a minority government, a prospect that is likely if Peter Dutton comes prime minister and there is resulting movement from the government to the crossbenches. More than one National Party MP has already indicated that they will, or might, go down this path.

The government prevented the referral of the matter of Dutton’s eligibility to sit in parliament under Section 44 of the Constitution by a single vote.

It won the subsequent division to adjourn the House by two votes. But as the government unravels, it is doubtful whether it can count on much of the crossbench in any vote on confidence and supply. And it will only take a couple of Coalition votes to peel away to bring down the government entirely. That, at least, would end our nightmare.

We have probably been closer, over the last 24 hours, to a government falling on the floor of the parliament than at any time since 1941, when two Independents combined with the Labor Party to put the Fadden government out of its – and Australia’s – misery.

Another of the moving parts of this leadership crisis was the subject of that first vote: the matter of whether Dutton should be disqualified on the grounds that his family trust has an interest in two childcare centres who benefit from millions of dollars in government subsidies. Like all of the Section 44 matters that have arisen over the last couple of years, it is impossible to predict which way it would go if the High Court deliberated on it.

But the fact the Liberal Party is seriously contemplating the elevation to prime minister of a parliamentarian over whom such a cloud exists is nothing short of a folly.

That the parliamentarian concerned is Peter Dutton is another of those wheels within wheels. Dutton is not an ordinary centre-right politician; not in the Australian political context, at any rate. The polls tell us that as preferred prime minister, he barely registers. He is in serious danger of defeat in his own marginal Queensland electorate.

Dutton was among the tiny number of MPs who thought it would be beaut idea to boycott Kevin Rudd’s Apology to the Stolen Generations. He opposed same-sex marriage. And, in a country that, so far, has largely resisted the populist revolt that has afflicted so many other western countries – a country where recognition of the benefits of immigration and the value of multiculturalism has been robust – he has recognised the political capital to be gained from tapping into the darker recesses of the Australian imaginary.

There is not a shred of evidence on the public record that a Dutton prime ministership would make the slightest difference to the slide in public opinion being suffered by the Coalition in Queensland, as reflected in the LNP’s ghastly result in the Longman byelection.

Rather, this is one for what the Americans call the “base” – the bloc of right-wing opinion that you’ll find well-represented in many Liberal Party branches – the kind of opinion that passes resolutions calling for the privatisation of the ABC.

It is one for the op-ed columnists and the radio shock-jocks who, if they can’t have their hero Tony Abbott back, are hardly less pleased by the prospect of elevating the latest version of the conservative tough guy. It is one for those who hate Malcolm Turnbull with an intensity that far exceeds their attitude to any other political leader of the modern era – on any side of politics – except perhaps Julia Gillard. It is one for those who believe that Australia can have its Brexit and Trump moments, and that Dutton is the man to deliver. It is one for the political fantasists, who believe that Australian voters would be attracted to hard-right policies if only they really understood their own interests.

They might be right. But it is difficult not to harbour the same suspicion that has always clung to the removal of Kevin Rudd in 2010 – that Malcolm Turnbull, far from being unable to win the next election, had been showing every sign of being competitive, if the party had only been able to get its loathing of him under control.

The 45-55 result in the recent Fairfax Ipsos poll was bad for the coalition, but its Newspoll results had been competitive – usually 49-51. And Turnbull was streets ahead of anyone else in the parliament as preferred prime minister.

How long ago that all seems. Whatever happens next – whether we have a Prime Minister Turnbull, Dutton, Morrison or Bishop – we can be certain it will not be sweetness and light among those who find themselves at the “out-group” when the dust begins to settle.

The government’s problem is not so much that it has produced yet another of Australia’s famous leadership crises. It is that it has looked like a government in an advanced state of political decay, and one that has largely forfeited its right to be taken seriously. It is hard to escape the conclusion that it is time the voters were given a say.