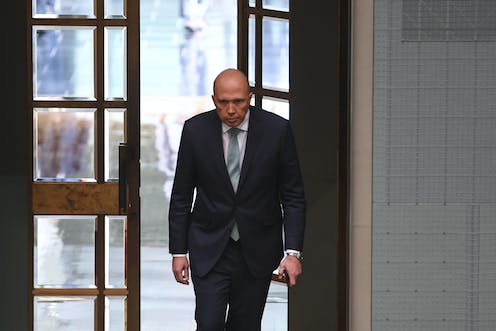 The Solicitor-General, Stephen Donoghue, has supported Peter Dutton’s eligibility to sit in the parliament, but with significant cautions.

The equivocation in the opinion, coming hours before the noon party meeting, further confuses the bitter fight underway for the leadership, in which Scott Morrison and Julie Bishop are also contenders.

The advice relates to whether Dutton could be in breach of the pecuniary interest part of section 44 of the Constitution, as a result of an interest in childcare centres through a trust.

The Solicitor-General says that in his opinion “the better view is that Mr Dutton is not incapable of sitting”.

Section 44 applies only when there is an “agreement with the public service of the Commonwealth”. The Solicitor-General believes there was no such agreement between the trust and the Commonwealth.

But “it is impossible to state the position with certainty”.

“I consider there to be some risk, particularly in light of the substantial size of the payments that appear to have been made by the Commonwealth to RHT Investments, that the High Court might conclude that there is a significant conflict between Mr Dutton’s duty as a parliamentarian and his personal interests”, giving Dutton an indirect pecuniary interest on that basis.

“However, while that risk cannot be entirely discounted, it would remain necessary for the Court to identify an agreement in which Mr Dutton held that interest. I am unable to identify that agreement.

"For that reason, I consider that the High Court is more likely to conclude that the size of the payments made to RHT Investments is not relevant to the s 44(v) analysis, because those payments were made pursuit to statutory entitlements of particular individuals who use child care services operated by RHT Investments.

"Finally, I consider it unlikely that Mr Dutton is disqualified by reason of payments made to RHT Investments under the Inclusion Support Program (ISP)” which provides childcare payments.

“Today I received advice from the Solicitor-General that in his view I am capable of sitting as a Member of the House of Representatives.

This confirms the legal advice which I received from the former Solicitor-General David Bennett AC QC yesterday and the advice I received from Guy Reynolds SC on 4 December 2017 and 23 August 2018.

David Bennett AC QC, who served 10 years as Commonwealth Solicitor-General, was recently successful in the High Court in Re Canavan and provided advice to Malcolm Turnbull on the eligibility of Justine Keay, Susan Lamb and Rebekha Sharkie, later confirmed by the High Court.

The consistent and strong advice which I have received puts to rest the false, unsubstantiated and malicious claims regarding my eligibility to sit as a Member of Parliament.”