Malcolm Turnbull has endured a humiliating end to a prime ministership that seemed to promise much. Like all political deaths, there are multiple causes, but one thing is certain: his leadership represents the crisis of liberal-conservatism in Australia at the moment.

The old liberal-conservative politics exemplified by Robert Menzies has been undercut by the failures of a liberal economy, the challenges to identity posed by mass migration and the rise of China, and the dissolution of the old middle-class base of moderate-right politics. Turnbull may be the last of his people.

The significance of this ideology has been downplayed by left-liberal intellectuals, but it has shaped Australian politics for more than a century. Now, however, this political belief system looks rather like European communism in 1989: an unhappy ghost begging to be laid to rest.

Read more: The Turnbull government is all but finished, and the Liberals will now need to work out who they are

The Liberal Party is often described in terms of a coalition of liberals and conservatives. The durability of the party suggests, however, that it is more than a coalition of adherents of two competing ideologies, rather conservatism and liberalism have been fused together into a single ideology, even if it retains internal tensions.

The dominant strand in Australian liberal-conservatism has been a liberalism of the right, driven by strong utilitarian focus, in which many traditionally conservative concepts, such as inequality and tradition, are defended to guarantee security, prosperity and happiness.

This is an old tradition of centre-right politics. Edmund Burke, the founding figure of Anglo-Saxon conservatism, was a Whig. He justified his turn towards the right at the time of the French Revolution not on grounds of religion or revelation, but on pragmatic arguments. 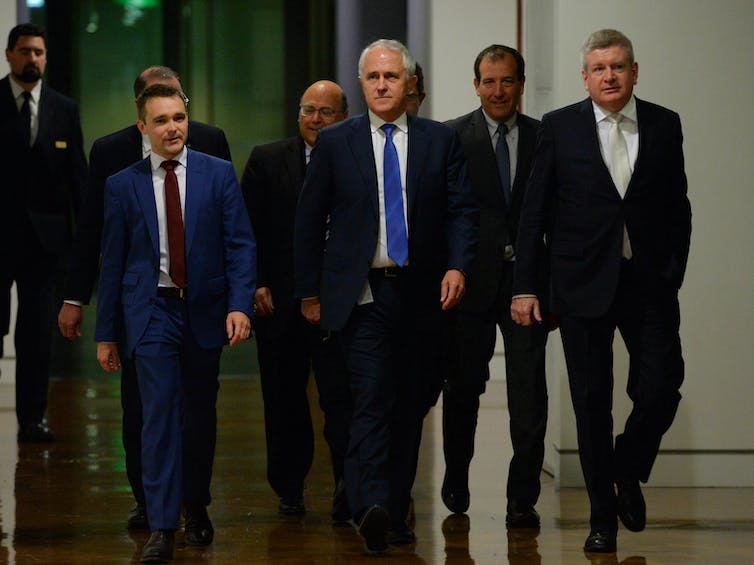 Happier days: Turnbull after announcing his challenge to Tony Abbott for the party leadership in 2015. AAP/Sam Mooy

Menzies admired Burke. The philosophy of liberal-conservatism has been that of a conservative means towards liberal ends: ordered individual liberty and security.

In Australia, these ends reflected the experience of a clearly defined social strata. This is what Judith Brett referred to in her analysis of Menzies as the moral middle class of small businessmen, office workers and professionals.

Menzies was a member of the elite, but he shared their aspirations and style. For him, society was a meritocracy in which those who had demonstrated ability were entitled to lead and be rewarded, but retained responsibilities to those less successful. 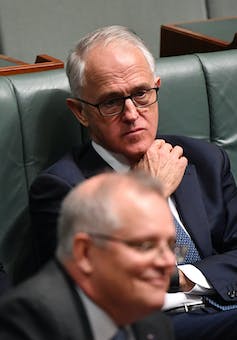 Liberal membership has collapsed. Liberal MPs no longer talk of members, it’s now the obscure Americanism of “the base”. Media celebrities and non-party members like Andrew Bolt have as much power as MPs.

Turnbull’s policies were compatible with a traditional liberal-conservatism, but the challenge he faced was that the world has changed since Menzies.

Turnbull brought a Menzian style to his leadership – both men had a faith in expertise. They relied on public servants such as Nugget Coombs and Martin Parkinson, whom hard-core conservatives disparaged as “Labor friendly”.

Turnbull sent climate policy off to the public service (just like Kevin Rudd before him). The result was a typically bureaucratic compromise like the National Energy Guarantee, which enthused nobody. 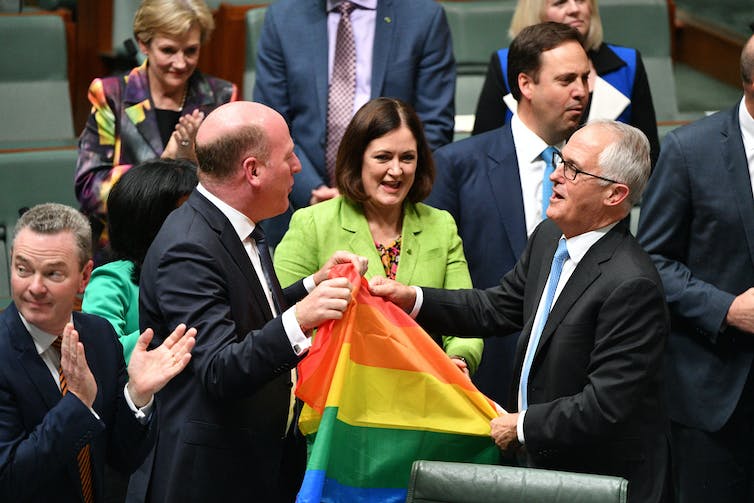 Turnbull championed conservative policies in other areas, too, such as border protection and income management. However, these were justified on pragmatic, utilitarian grounds. Border protection, in particular, was described as necessary to prevent deaths at sea and maintain public confidence in an economically beneficial immigration program. Here, Turnbull shared common ground with Labor. 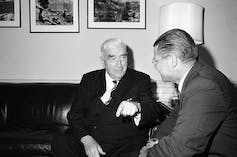 Robert Menzies (left) with US Secretary of Defense Robert McNamara in 1964. Wikicommons

There was a strong demand from the right for a leader who would articulate these identity fears. But Turnbull’s default setting was to defend liberal multiculturalism: beneath the surface difference of dress and ritual, he believed all Australians shared similar aspirations. But for many on the right, Australia was under threat from within.

Read more: Turnbull is right to link the Liberals with the centre – but is the centre where it used to be? 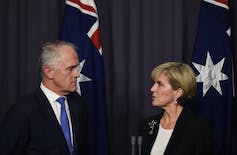 Turnbull and Julie Bishop after he became prime minister in 2015. AAP/Lukas Coch

A party will frequently tolerate leaders out of sympathy with much of their base, so long as they win elections. Tony Blair in the UK is an example. Turnbull’s greatest problem was that social change undercut the basis for his economic liberalism.

The policy item that evoked the most enthusiasm for him among voters was the agenda of individual and corporate tax cuts. Turnbull’s ability to navigate income tax cuts through the Senate revealed him to be good transactional politician, again like Gillard.

Yet, although voters credited Turnbull’s economic management in the abstract, they were unhappy with income stagnation. The liberal economy forged by Bob Hawke, Paul Keating and John Howard now disappointed the electorate. At the 2016 election, voter anxiety on this issue led to a disappointing outcome for Turnbull. The sequence of opinion polls soon revealed that Labor’s surprise performance in the election was not an aberration. Turnbull’s days have been numbered ever since.

For all of Turnbull’s rhetoric of disruption and innovation, he was a politician out of his time. His style recalled an older era of elite consensus and orderly democracy.