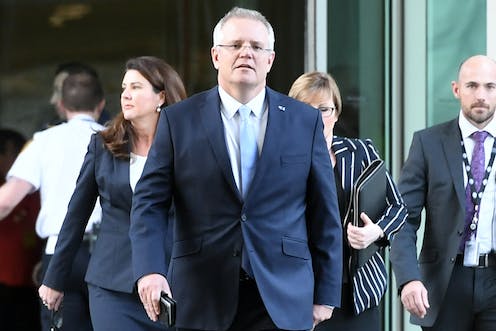 John Howard was fond of referring to the Liberal Party as a “broad church”. This included its conservative “base”.

But what has eluded those seeking to define this amorphous group of electors is exactly what is meant by this description.

Then there is the overarching question of exactly what the Liberal Party stands for these days. Is it a liberal party in the sense it is a centrist, socially progressive and fiscally conservative party?

Is it a right-of-centre party that is socially conservative, or is it a proto-conservative party defined by a scepticism about climate change edging towards a form of denialism?

What confronts Scott Morrison, the new leader, is how to reconcile these conflicting tendencies and come up with an amalgam that would have some prospect of appealing to an elusive base that ranges from Victorian liberals in the south to Queensland conservatives in the north.

Where the fulcrum of this mythical “base” resides will represent a continuing challenge for a Liberal party that, like Humpty Dumpty, will be seeking to put all the bits and pieces back together again.

Is its home in Brisbane’s suburbs, or Queensland’s far north, or Melbourne’s south-east, or Sydney’s northern suburbs, or the Adelaide Hills, or Perth’s cluster of suburbs around the Swan, or in a Tasmanian Hobart-Launceston corridor?

The short answer is all of the above.

Among those who write convincingly about conservative politics, Greg Melleuish, has put his finger on a contradiction at the heart of Australian liberalism.

“One of the most interesting developments of the 50 years since Menzies’ retirement is that the non-Labor side of politics has become more ideological,” Melleuish wrote in The Conversation earlier this year.

“Deep fractures have emerged between those who identify as liberals and those who consider themselves to be conservatives. This has happened at a time when, in many ways, liberalism has triumphed as an ideology in Australian life.”

A lot has been assumed on behalf of the “base” by Turnbull’s critics, including a media cats’ chorus.

Among the criticism is that he proved incapable of connecting with the “base”. Indeed he was, according to his critics, anathema to the “base”, who regarded him with suspicion as a plutocrat in a caricaturist’s top hat who was far removed from everyday lives.

Arguments on behalf of the two principal candidates to replace Turnbull as leader of the Liberal Party rested significantly on their ability to relate to rank-and-file voters.

In a contest to be regarded as an Australian everyman, the son of a New South Wales cop in Scott Morrison took on the son of a Queensland brickie in Peter Dutton.

Both men could hardly be more different from Turnbull, in their political trajectory and in background. A lot of nonsense has been written about Turnbull’s “deprived” childhood and his ascent to the privileges of a Point Piper residence.

He was educated at Sydney Grammar and was the beneficiary of a useful inheritance when his father died. His mother may have deserted the family when Turnbull was a child, but this is not the story of a council flat to The Lodge – far from it.

What Morrison now faces – apart from seeking to bind gaping wounds in the parliamentary party between his own supporters and those of the conservative Dutton – is to persuade a broader Australian electorate beyond the so-called “base” that his Coalition actually does represent a broader church.

On the evidence, Morrison confronts a considerable task convincing Australians a party riven between its moderate and conservative wings and beholden to its mythical base is capable of binding its wounds.

Judith Brett addressed what will be an essential question for the new leader in his efforts to embrace a broad church. “Where is this heart and soul, and how strong is it?” Brett asked.

“Let’s be clear – the continually appealed-to ‘base’ is not very many people. At a generous estimate there are about 50,000 party members spread across 150 electorates.”

These numbers hardly a constitute a sustainable base.

Read more: What kind of prime minister will Scott Morrison be?

This result does not suggest the electorate’s sweet spot is as conservative as Dutton and his supporters, including Tony Abbott, would have you believe.

Morrison would be mistaken if he believed his party’s salvation lay in a further lurch to the right in pursuit of an ill-defined “base”. Rather, he would be well advised to tack back to the sensible centre on issues such as climate, energy policy, fiscal responsibility and immigration.

Morrison needs to bury the three word slogans of the right, and fast. In other words, he should speak plainly about the challenges facing the country, and remedies that might put an end to the drift. He doesn’t have a lot of time.