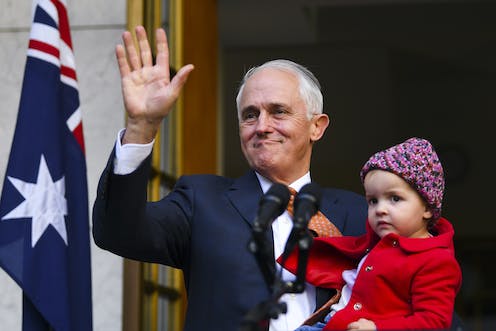 This is Labor’s biggest lead and highest primary vote in Newspoll since Tony Abbott knighted Prince Philip in January 2015. It is also the Coalition’s 39th successive Newspoll loss, and their lowest primary vote since 2008, when Kevin Rudd was dominant. Since July 2015, Newspoll has been a very stable poll, so a five-point swing is remarkable.

According to analyst Kevin Bonham, in the poll following the change of PM, the governing party gained two points after preferences in 1991, one point in 2010, six points in 2013 and five points in 2015. The five-point drop in 2018 is by far the worst reaction to a midterm change of PM.

Turnbull and Rudd were both far more popular than the incumbents when they won leadership spills; the public wanted them to be PM. Keating and Gillard were both very well-known, and the incumbent PM had lost his popularity when toppled.

Just four weeks ago, in the Newspoll taken over the weekend of the July 28 byelections, Turnbull’s net approval was -6, his equal best this term. Polls taken in the week of the spill showed Turnbull leading as best Liberal leader with all voters and Liberal voters. The public did not want to replace Turnbull.

The public’s choice for a replacement would have been Julie Bishop, but she won just 11 votes in the spill. Bishop’s resignation as foreign affairs minister on Sunday damages the Coalition by depriving it of a popular figure.

Turnbull was forced out by the hard right’s hatred of him, not due to public opprobrium. Peter Dutton, who led the challenge, did not become PM, and Scott Morrison, who barely registered in Liberal leadership polls, is now PM owing to his ability to win the numbers in the party room.

I believe the public see Turnbull’s downfall as being the result of a right-wing coup, and this has greatly damaged the Coalition’s standing. On Sunday, Dutton was reappointed as home affairs minister. I think this was a mistake by Morrison, as the public would like to see Dutton punished.

This Newspoll was taken in the immediate aftermath of a week of vicious internal politics. But memories of that week will fade, helping the Coalition. Morrison starts with low expectations. If he exceeds those expectations, the Coalition is likely to benefit. A big question is whether Morrison can appeal to moderates without angering the hard right MPs and media commentators who destroyed Turnbull.

In other results from Newspoll, Bill Shorten had a 39-33 better PM lead over Morrison (44-32 to Turnbull last fortnight). This broke Shorten’s run of losses under Turnbull; the last time he won a better PM poll was under Abbott. Morrison has had no time to establish himself. The usual approval ratings questions were not asked this week.

Morrison led Shorten by 44-34 as best economic manager (48-31 under Turnbull in May). The economy is regarded as a Coalition strength, and Morrison was the former treasurer.

On best Liberal leader, Bishop had 29%, Morrison 25%, Turnbull 14%, Abbott 11% and Dutton just 6%. Morrison has benefited from a victory bounce, while the opposite has happened to Turnbull.

The Liberals now lead Labor by 33 points on divided (tied in late July), by 31 points on “too close to big corporate interests” and by 18 points on “out of touch”. Labor leads by 23 points on working people’s interests and by 14 points on “clear about what they stand for”.

By 40-35, voters disapproved of Morrison replacing Turnbull as PM. By 57-27, voters agreed that the Liberals are divided and no longer fit to govern. Voters thought Morrison the better PM against Shorten by a 39-29 margin (41-27 to Turnbull last fortnight).

By 46-32, voters opposed withdrawing from the Paris agreement on carbon emissions, and there was a 41-41 tie on funding more coal-fired power stations. Cutting tax rates for big businesses and people earning over $200,000 per year had over 62% opposed. Cutting immigration numbers was supported 62-27. Over 60% supported seven proposed measures to reduce gambling.

Contrary polls in Dickson; 9% swing to Labor in Deakin

These seat polls indicate that the Coalition’s problems with the transition are particularly severe in Victoria, as One Nation does not do well there and there are many moderates. Queensland is One Nation’s strongest state, and a switch to a more right-wing PM may help the Coalition gain One Nation votes.

Seat polls are unreliable, and it is better to use the latest national and state polling as a guide to seats. Given the national swing in Newspoll of over 6% to Labor, I think the Newspoll Dickson poll is more likely to be accurate.

Morrison led Shorten as better PM by 52-48 in Deakin, 55-45 in Reid and 59-41 in Dickson. ReachTEL’s forced choice better PM question is assisting Morrison; most people do not know enough about him for an opinion, and are giving him the benefit of the doubt over the still-unpopular Shorten.

Malcolm Turnbull will resign as the Member for Wentworth on Friday, and a byelection is likely to be held in October. While Turnbull holds Wentworth by a 17.7% margin, the tweet below from the ABC’s Antony Green shows he massively increased his vote from 2007 to 2013. Without Turnbull’s personal vote, Wentworth may be vulnerable, but it is still a big ask for a non-Liberal to win.