Mirka Mora has left us, at the age of 90. She will be missed by her family and friends, who recall her sunny personality and formidable appetite for life. But for all art lovers, her work will continue to shine in the city she contributed so much to: in front of Melbourne’s Flinders Street Station, at St Kilda Pier, on the walls of the Tolarno restaurant… 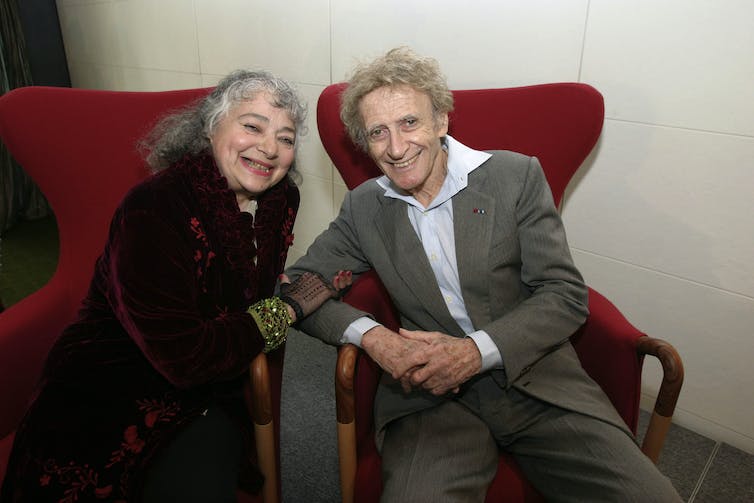 Mirka Mora and Marcel Marceau in 2003 after he had presented her with the Officier des Arts et des Lettres, one of France’s highest honours. Shaney Balcombe/AAP

In reflecting on Mirka’s life and work we should remember that it was not easy to be a woman artist in the post-war decades of the Australian art world. Women were almost invisible in the art scene at that time, but Mirka managed to carve a place for herself. She epitomised freedom, originality and independence while still being very feminine. 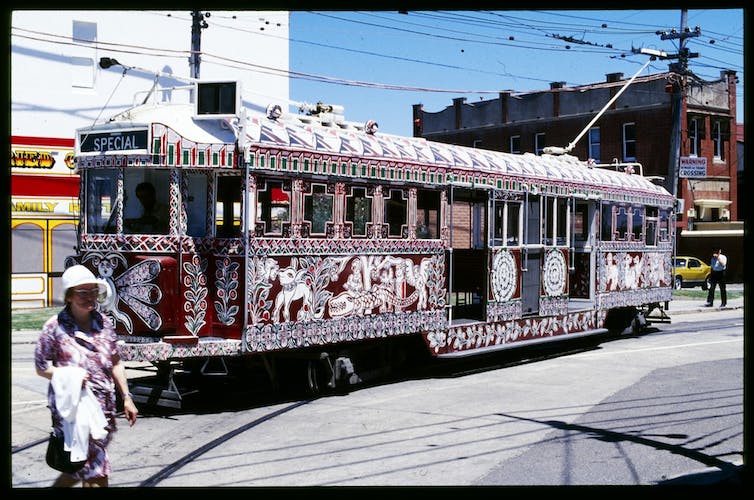 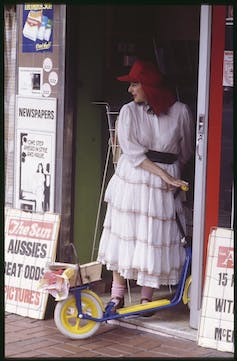 Mirka Mora at a newspaper shop with her scooter. Courtesy of the Rennie Ellis Photographic Archive.

I have been privileged to meet and work with Mirka over the last five years, first conserving some of her public artworks, and then writing a PhD on her many techniques and materials. After first meeting in 2003, we had many conversations about making and conserving art. As usual with Mirka, these led onto other topics such as love, children, men and migration. But they always returned to art, to the Old Masters, to the true love of her life - painting - which gave her so much joy.

Mirka came to better understand how artists’ voices matter in conservation, and I discovered the artist behind the celebrity, her sophisticated creative processes elaborated through her extensive research into the technical literature, and honed by hours of practice.

She was very generous: digging out from her drawers one of her extraordinary embroideries that she kept with her linen, to show me the stitches and tell me the story behind the image; ordering me to climb over chairs and drawers to reach a rare, old book on painting, because she wanted to show me the historical roots of her art; opening her diary for me, and commenting on the creation of a mural that was unfolding over the pages, all with her usual wit. 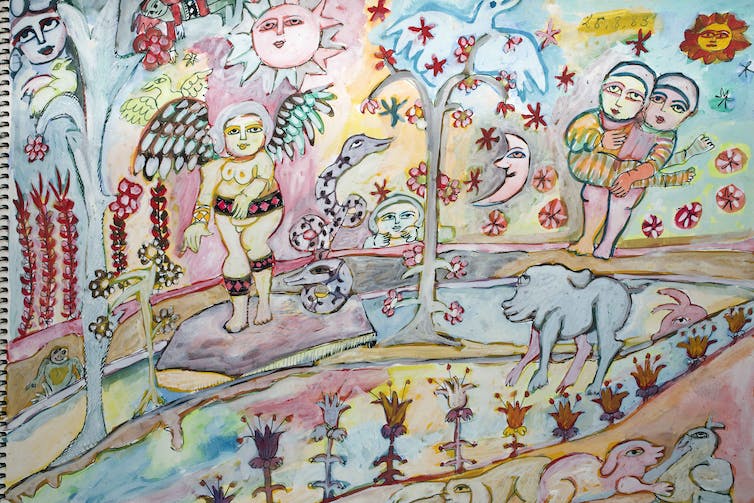 Along the way, she collected an incredible library, speaking of books and her brushes as her best friends. She revisited many ancient techniques, from mosaic to egg tempera and embroidery, each time twisting them, adding her personal touch (“you see I cannot follow a recipe, I have to make it my own”) and creating her unmistakably recognisable style. 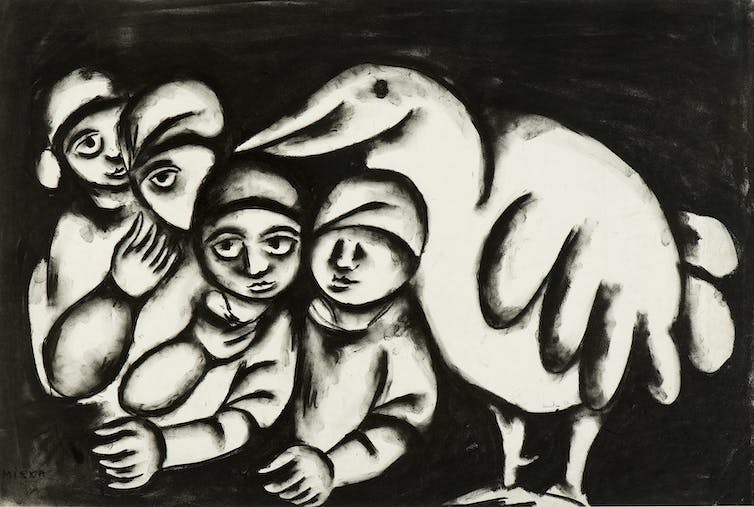 Her great flexibility of mind carried her over challenges such as painting a tram or making theatre masks – inventing new techniques along the way. She loved the latter, not the least because working for the stage reunited her with her French theatre training, and infused every creation with her deep understanding of mythology and iconography.

Rarely has an artist worked as seamlessly between techniques, over more than 60 years, as Mirka did. She had arrived in Melbourne from Paris in 1951 after she, her mother and her two sisters had survived incarceration in a concentration camp in Pithiviers in 1942. The family was among only 18 survivors of that camp - the others were sent to Auschwitz. She went on to marry Georges Mora, a French resistance fighter. After settling in Australia they opened a cafe in 1954. She made art for the next six decades. 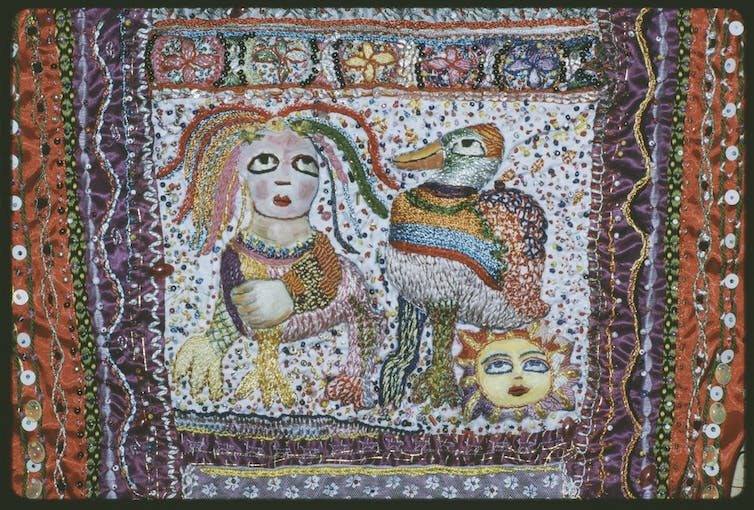 ‘The duck that laid the sun’. Mirka Mora embroidery with stitching and applique, which is heavily beaded. Courtesy of Rennie Ellis Photographic Collection, State Library of Victoria

In Mirka’s daily routine, she did not impose any hierarchy upon different processes; which is why her studio was always crammed with materials – beads, brushes, mosaics, cloth, tubes of paint - in case she wanted to start something different. 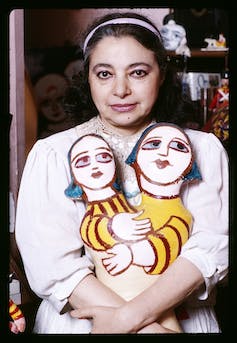 Her painted dolls are famous. She led many workshops, where art lovers could experiment with painting, embroidery and her characteristic technique of soft sculpture. She did not like to part with these sculptures, and kept many in her studio, together with her own collection of antique dolls, a constant source of inspiration for her paintings.

“With these dolls I feel more and more ancient and yet so refreshed … my watch has stopped but a new doll is about to be born, then another one and another one…” she wrote to John and Sunday Reed, in a letter kept at the State Library of Victoria.

From tiny pieces to very large works, Mirka never shied from difficulty: “I can’t say no to a work that I find exciting,” she said. “I would paint the sky if I was offered it!”

Personally, I am especially moved by her embroideries: they are beautiful images that marry textile and painting skills. You can get lost in their detail.

We will feel her presence for a long time to come. Thank you and au revoir Mirka.