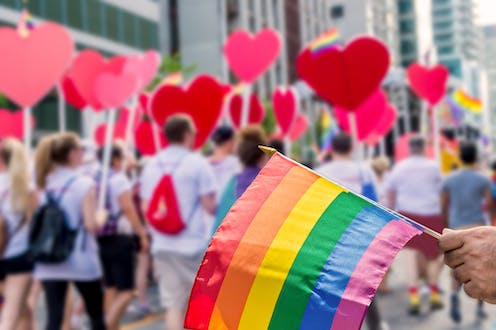 Through the year there are now countless awareness-raising days for a range of causes. Whether you’re sending your child to school with a gold coin for Red Nose Day or wearing a pink ribbon on your lapel to work for Breast Cancer Awareness Month, these initiatives are now common in Australian daily life. But what’s the purpose of these events and do they actually work?

In a time of social media “slacktivism” from behind computer screens, there has been much criticism of the practical ability of awareness-raising campaigns to bring about real social change beyond superficial feel-good politics.

There’s no hard data to suggest days such as Wear It Purple Day this week actually have a long-term effect. But there is some evidence similar events provide important visibility for complex social issues and can create social change.

Wear It Purple Day is celebrated on the last Friday in August each year. It’s an annual event to raise awareness about same-sex attracted and gender diverse young people’s experiences of bullying and harassment, particularly at school.

Wear It Purple was founded in 2010 in response to high rates of young people taking their lives as a result of homophobic bullying. This event is now an international movement. Many Australian workplaces and schools will host bake sales and encourage staff and students to wear purple clothes to support their lesbian, gay, bisexual, transgender, intersex and queer (LGBTIQ) peers.

The Queensland Police Service have even issued officers and staff with purple bootlaces to wear on the day.

But while these celebrations of diversity and inclusion send an important message, it’s unlikely they’ll have any real effect if they don’t give people practical things they can do to help the cause, or if they don’t engage the broader community in a meaningful way.

R U OK? Day, held annually in September, is dedicated to reminding people to ask others “are you OK?”, in terms of their mental health.

Researchers from across Australia used a population survey to find out what impact this event was having in the community. They found people who were aware of R U OK? Day were more willing to talk with others about their troubles and to hear the troubles of others.

White Ribbon Day has become a global movement to end violence against women. Its history in Australia is one example of how an awareness-raising day can be the platform for building a broader movement. Starting as an annual White Ribbon Day on November 25, the organisation now delivers education programs and bystander initiatives.

Although it continues to attract critics, White Ribbon Day demonstrates the potential for one-off awareness-raising days to have a broader social impact when expanded into an ongoing movement, organisation, or initiative.

This year marked the 40th anniversary of the first Gay and Lesbian Mardi Gras march in Sydney. It began in 1978 as a protest against police brutality of gay men. The 1978 Sydney Mardi Gras became a defining moment in the history of LGBTIQ rights in Australia and remains symbolic for the LGBTIQ community. The Sydney Mardi Gras marches put Sydney on the map as an international gay and lesbian city.

A study found Pride marches such as Mardi Gras are important for raising awareness of social injustice for event participants. They also enhance participants’ sense of identity in everyday life through collective experiences of resistance and the shared identity.

Read more: How the histories of Mardi Gras and gay tourism in Australia are intertwined

Taken together, these examples show how raising awareness is only the first step in creating social change. The impact of awareness-raising days is in their power to start conversations about important issues and provide visibility to causes that might otherwise be absent in the public sphere.

While there is a real danger of equity and diversity days reducing the issue to a local or individual concern, there’s also the potential for such events to create dramatic change in policy if communities get behind the cause.

Practical strategies that help give awareness-raising days momentum include having a clear call for action, such as R U OK? Day, which aims to promote conversation between individuals and raise awareness of mental health. Or by leveraging the passionate people invested in the cause, similar to Mardi Gras. Or to work strategically with key stakeholders to build longer term awareness-raising programs into organisations, such is the work of White Ribbon.