Companies with more gender-balanced boards are less often sued for breaching environmental laws, suggesting that these companies are more mindful of protecting the environment. That is the key finding of my research, published in the Journal of Corporate Finance.

I studied 1,893 environmental lawsuits filed against any of the firms listed on the Standard and Poor’s 1500 composite index in the United States from 2000 to 2015.

I found that for every additional woman appointed to a corporate board, the company experienced an average 1.5% reduction in litigation risk.

The average cost of an environmental lawsuit is estimated to be 2.26% of a company’s market value, which translates into a dollar value of US$204.3 million based on the current average market capitalisation of the S&P1500 firms in my sample. This means that reducing the litigation risk by 1.5% (by appointing a female director) would be the equivalent of saving US$3.1 million.

My research only shows a correlation between the gender makeup of corporate boards and their likelihood of having been sued on environmental grounds in subsequent years. From these data it is of course difficult to draw any conclusions about the causes of this relationship. But there are nevertheless several theories that can potentially help to explain why more gender-diverse boards might tend to make better environmental decisions.

First, women and men tend to have different ethical standards, according to existing research. Male directors are stereotypically power-oriented, whereas female directors show greater universalistic concerns for other people. Female voices in the boardroom could therefore conceivably help companies to keep the welfare of local communities in mind when making environmental decisions.

Second, people who are more different from one another (such as in terms of gender or race) generally make better group decisions together. This is in part because different people can bring different perspectives to discussions and come up with a wider range of potential options from which to choose. This in turn allows them to find the optimal solution. Given that many arenas of business are still male-dominated, hiring female directors generally improves boardroom diversity.

Globally, women are underrepresented on corporate boards. According to the Australian Institute of Company Directors, only 21.7% of board members of the top 500 companies on the Australian Stock Exchange are women – and 113 of those companies still have no women on their boards. 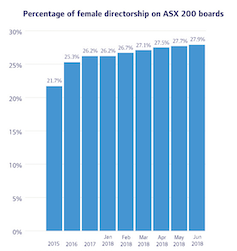 Australian Institute of Company Directors Ten years ago, Norway blazed a trail by becoming the first country to require companies to appoint at least 40% women on their boards. Since then a dozen countries have followed suit and set boardroom gender quotas, including France, Belgium, Italy, and Spain. The UK and Australia continue to rely on firms adopting voluntary initiatives, such as joining the 30% Club, to improve boardroom gender diversity. In Australia and the European Union, debates persist over whether companies should have a mandatory quota of female directors. Critics of this idea have argued that it would not necessarily boost profits, and may force companies to hire unqualified candidates or to offer multiple board positions to a relatively small group of highly qualified women. Read more: Daniel Andrews, board quotas and the myth of 'insufficient women' Proponents of board gender diversity argue that having women on boards helps companies make better decisions – a theory that is supported by my research results. My study did not directly measure whether “being green” makes companies financially better off. But given the urgency of global environmental problems, female corporate leadership makes an important contribution to benefit societies by improving companies’ environmental conduct.