Renewables are stealing the march over coal in Australia, and the international outlook is for lower coal demand. Today the international Coal Transitions project released its findings, based on global coal scenarios and detailed case studies by teams in China, India, South Africa, Australia, Poland and Germany.

Our research on Australian coal transition – based on contributions by researchers at the Australian National University and the University of Melbourne – looks into the prospects for coal use in Australia and for exports, and the experiences with local transition in the case of the Hazelwood power station closure.

Read more: Hazelwood closure: what it means for electricity prices and blackouts

Coal production in Australia is likely to be on a long term declining trajectory. Almost all coking coal (coal used for making steel) mined in Australia is exported, as is around 70% of steam coal (for electricity generation). Australia supplies about a fifth of the global steam coal trade.

A question mark hangs over the future of steam coal exports. Economic, technological and policy developments in other countries all point to likely falling coal use over time. The international coal transitions synthesis report expects that global coal consumption will go into reverse by the early 2020s.

In most industrialising countries, there are big concerns about local air pollution, and renewable power alternatives are becoming cost-competitive with coal. Add to that the pressure to meet Paris emissions targets.

China and India, on which much of the hopes of Australia’s coal export industry are pinned, mine coal themselves. When overall coal use in these countries falls, imports may be curbed, if only because of pressures to prop up domestic coal mining.

Most coal used in Australia is for power generation. We are at the start of a fundamental change in the system, where coal power will be replaced by renewables, with energy storage and flexible demand-side response to firm up the system.

The competition is now between renewables and existing coal fired power stations. Wind and solar power cost next to nothing to run once built, so they are dispatched first on the grid and tend to bring wholesale market prices down. In turn, the economics of coal power plants deteriorates. They will not be able to sell as much power, and get lower prices on average for every megawatt-hour of electricity produced. New wind and solar is now contracted at prices close to the operating cost of some existing coal plants, and renewables costs are falling further.

Coal plants will be less and less profitable. They will tend to be shut down earlier, typically when major repairs or overhauls are due. Major refurbishments will tend to become unattractive. And the system does not need coal plants to run reliably. A combination of regionally dispersed renewables, pumped hydro and battery storage, gas plants and demand response will do the job.

It is difficult to predict just when coal plants will shut down. The following graphic illustrates the difference between a flat 50-year retirement pattern (as used for example by the Australian Energy Market Operator), with plants retiring at 40 years of age, in line with the average retirement age of plants over the past decade, and two illustrative scenarios that capture the fact that coal plants will come under increasing economic pressure. 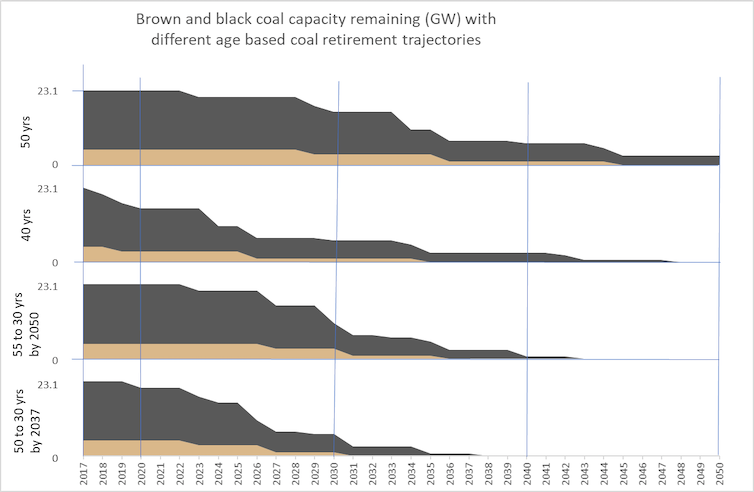 Even more rapid closure scenarios are plausible if the cost of renewables and storage continue on their recent trends. We do not present them here, instead opting for relatively conservative assumptions.

The pace of closure makes a big difference to emissions. In the “moderate” scenario, cumulative emissions from coal use are around 2.6 gigatonnes of carbon dioxide (GtCO₂) during 2020-50, and in the “faster” scenario around 1.8 GtCO₂.

It is no longer true that reducing emissions in the electricity sector necessarily means higher prices. These days, and in the future, having policy to guide the replacement of ageing coal capacity with cheap renewables is a win-win for consumers and the environment.

We had better get ready

We better put our efforts in preparing for the transition, rather than trying to stem the tide. That includes a meaningful policy treatment of carbon emissions, and mechanisms to allow more predictable exit pathways. The relatively sudden closures of the Hazelwood power station is an example of how not to manage the transition.

Wholesale prices jumped up because the replacement investment takes time, and governments scrambled to provide support to the local community after the fact.

We can do much better. Australia is well placed for a future built on renewable energy. The change can be painful if it’s not well managed, but the future looks bright.

Read more: Australia is not on track to reach 2030 Paris target (but the potential is there)