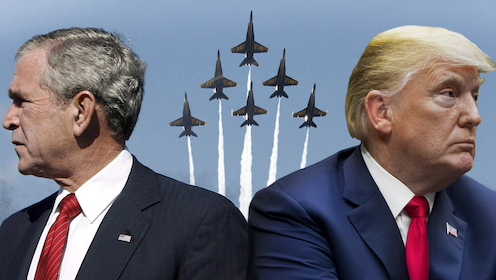 Despite the significant global outrage at US President Donald Trump and his supporters – best highlighted by the Pew surveys and more viscerally by the enormous anti-Trump protests in London in July 2018 – anti-Americanism is less apparent under Trump than it was under President George W. Bush.

Shortly into the Bush presidency, a wave of books such as Why do People Hate America? became bestsellers. This was part of a lively debate at the time about what constituted anti-Americanism.

I was part of this cottage industry during the Bush era and ended up editing seven books on the topic. I reached the conclusion that anti-Americanism is best understood as a generalised prejudice against, and disdain for, America and Americans. In the Trump era, there is no sign of this publishing boom reappearing; instead books and articles on populism are now the preferred way to understand Trump.

There are a range of reasons for this. Firstly, Trump does not personify America to foreigners in the way that Bush did. Although Trump is a populist, it is more his policies and speeches that are populist than the man himself.

Trump is famous for showing off his wealth and suggesting it makes him highly desirable to women and a role model for young entrepreneurs. In the 1980s and 1990s Trump flaunted his wealth to build a profile in the New York tabloids as a property tycoon and “ladies’ man”.

Read more: Where will the global political hotspots be in 2018? (Spoiler alert: it's not all about Donald Trump)

In 2004, NBC launched reality TV show The Apprentice, in which Trump rewarded the successful participants by inviting them over to his lavish New York apartment and to his golf clubs. Trump may claim to speak for the “average American”, but he is widely understood to be proud of his wealth and elite status. In response to revelations about Michael Cohen (Trump’s personal lawyer) paying Stormy Daniels US$130,000 in hush money, Trump tweeted:

These agreements are very common among celebrities and people of wealth.

In contrast, George W. Bush liked to suggest he was just a regular guy who happened to be born into a famous family. Bush’s down-home self-presentation was largely accepted by foreigners who tended to see him as representative of all that was wrong with America and Americans, such as its moralistic religiosity, insularity and lack of interest in foreign affairs, gun culture and fast food, and righteous sense of violent vengeance. To many, Bush’s cowboy boots on the desk and Texan drawl said it all.

The notion that the president is the personification of the nation has not been anywhere near as apparent with Trump.

The other reason Bush was seen to represent American attitudes was that foreigners quickly forgot his highly controversial victory in 2000 after the events of 9/11, which led to his popularity skyrocketing.

In September 2001, Bush received the highest approval of any president since surveys were initiated in the 1940s. A Gallup survey had his public approval at 90%. An ABC News poll the same month had his approval peaking at 92%. Trump’s approval rating in the Gallup surveys has never been higher than 45%.

The other factor that made anti-Americanism more apparent during the Bush presidency than during the Trump era to date was a sense that most Americans supported the Bush administration’s decision to invade Iraq in 2003.

This rallying around the flag during the Bush era, when unity was demanded and often achieved, stands in marked contrast to the Trump era. It’s obvious to non-Americans that many Americans were very unhappy Trump was elected.

The Women’s March in Washington DC the day after Trump’s inauguration, which attracted half-a-million protesters, received a lot of global coverage and inspired similar (although smaller) Women’s Marches around the world.

Whereas during the Bush presidency the anti-Iraq War marches of February 14-16 2003 were much bigger outside the US than within America. In London and Madrid, over a million people turned out to protest against Bush’s proposed war. More than 100,000 participated in demonstrations in Berlin, Sydney, Athens, Barcelona, Seville and Paris. The largest US march was in New York City, where around 100,000 turned out to oppose the war – a number similar to that in the much less populous cities of Lisbon and Dublin.

Another reason anti-Americanism is less apparent today than during the Bush presidency is non-Americans began to take much greater interest in American presidential elections at a granular level in 2008 with the rise of Barack Obama. It began with his victory over Hillary Clinton in the primaries and jumped again with his defeat of John McCain in the main event.

The primaries and the general election have been covered since 2008 in many nations outside the US with constant information and commentary in local newspapers and other media services. As a result, following American presidential elections became habitualised, like following the FIFA World Cup or the Olympics. The rules of the primaries and the Electoral College became more widely understood.

In my view, this closer following of US elections has reduced anti-Americanism because it has led to non-Americans seeing how much difference of opinion there is within the US and how many Americans oppose the winning candidate. As a result, it is widely understood how divided America is between Trump supporters and those Americans who not just oppose Trump but despise him.

Read more: With Cohen and Manafort both guilty, the pressure on Trump is rising

Another key factor in reducing anti-Americanism since the Bush era was the Obama presidency. As the Pew surveys show, Obama was very popular outside the US, where his time in the Oval Office was watched with much interest and hope.

The most obvious example of this was Obama being awarded the Nobel Prize for Peace in 2009. Obama’s prominence and global popularity led to Americans and America being thought of differently.

Obama liked to present himself as the quintessential 21st-century American: with a white mother and a black father, longstanding and recent immigrant ties to America, and a pragmatic willingness to compromise on political matters. The fact Trump and the birther movement slandered Obama for supposedly not being born in America, and even for being a closet Muslim, generally made him more popular abroad. Obama was seen as an ideal antidote to the globally unpopular Republican Party.

Non-Americans were largely impressed by this persona and the new America Obama talked about. As a result, America once again became hip around the world. In my hometown of Sydney, American-styled dive bars and pricey “Southern food” restaurants opened after an absence of such ventures during the Bush presidency.

Obama’s urbane and worldly personality challenged the stereotype of all Americans being warmongering, insular and nativist. Even the election of Trump has not entirely washed out this new understanding of America from the collective consciousness of non-Americans. In the years since Bush left the Oval Office, a more nuanced view of America and Americans has become more predominant.