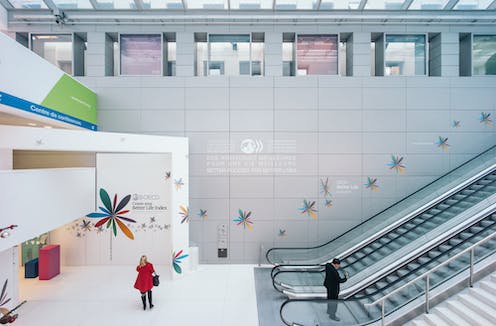 This is a longer read. Enjoy!

In Paris each year, the Organisation for Economic Co-operation and Development (OECD) publishes its Education at a Glance report. And each year, local reporting highlights our incredibly low public spending on tertiary education.

In this narrative, the 2016 edition ranked Australia second-lowest in the OECD. The 2017 edition put us in the bottom four, well below countries such as Portugal and Mexico, and 40% below the OECD average.

With claims such as these making headlines, few would guess Australian tertiary education is not that under-funded, comparatively speaking. New figures in the 2018 edition, released last week, confirm this.

The top line in the chart below shows OECD estimates of total spending on Australian tertiary institutions as a share of GDP, over 2008-2015. This is the OECD’s “B2” metric for institutional revenue. It shows the level of income from all sources that flow to universities and other tertiary providers.

The line below is the OECD’s “B4” metric: total public spending on tertiary education as a whole, from a government point of view. This includes direct public grants to institutions, and also government loans or grants to students for tuition fees, living costs, and so on.

Australia compared with other tertiary systems

The chart below shows Australia’s total public spending rate in cash outlay terms, between 2010 and 2014.

The chart below shows how, in most OECD countries, total rates for tertiary institutions (revenue from all sources, public or private) were flat or falling between 2010 and 2015. Again, Ireland’s rate fell sharply, in this case from 1.6% to 0.8% of GDP. Rates also fell in Finland, Portugal, Slovenia and others. As the OECD average slid to 1.5% of GDP, the Australian rate rose markedly, from 1.6% to 2.0%.

A government spin-doctor might say tertiary funding in Australia ranks “fourth-highest” in the OECD. But not really.

In part, Australia’s high rate reflects high private revenue from our high volume of international enrolments. As well, universities have had a domestic enrolment boom financed by uncapped government grants and loans (until 2017). Also, public loans in the now closed VET FEE-HELP scheme, which had been misused by unscrupulous providers, peaked in 2015.

Per student, Australian institutional spending rose 20%. The OECD average rose 11%. In Ireland, Spain, Germany and others per student spending fell.

To compare institutional resource levels per student across systems in any given year, the OECD uses “purchasing power parity in US dollar” estimates to compare spending rates across diverse economies on like-for-like terms.

How can we be “second-lowest”?

From the evidence so far, many might wonder how Australia’s funding could be lower than in most European countries. This is because local reports of “second lowest”, “bottom four” and “40% below average” rely on a single slice of data from the OECD’s data set which shows public spending on tertiary institutions.

This version of “public spending” excludes HELP loans, historically classed as a “private” source of revenue in this dataset. Using this classification, the 2016 report put our “public” rate at just 0.7% of GDP against an OECD average of 1.1%. The chart shows how, on this view, we seemed “second-lowest” in 2013, ahead of Japan.

But as the OECD has recognised, its metrics which show total spending on tertiary institutions don’t show the real public cost of student loans in the UK or Australia.

Last year, Australian higher education expert Simon Marginson estimated that the UK’s 2014 “public” and “private” spending rates in this dataset (0.6% public and 1.3% private) came closer to a 50:50 split once unrepaid student loans were taken into account.

And in Australia last year, the government reduced the estimated value of accrued student HELP debt substantially, from A$55 billion to A$36 billion. In these cases, OECD’s data understates public and overstates private spending.

As the chart above shows, these “public spending” figures on their own present only a partial picture. A further problem with the “second-lowest” tag is that the OECD’s 2016 report had no data to show for Luxembourg or Greece. And until last year’s OECD report the UK was reporting student loans as public while Australia’s were reported as private.

The 2018 report reflects OECD efforts to separate apples and oranges where public loans are a major policy instrument. The UK’s revised “public” rate now sits below Australia’s, not at the OECD average. And the OECD’s updated metric for public/private spending now shows figures for “initial” government payments to institutions, including public loans for tuition.

This puts “final” government funding in context, by showing how different approaches to public financing play out for tertiary institutions.

Even then, the latest “11th-lowest” view of Australian public spending needs more context.

In metrics like these - local spending as a share of national income - high economic growth in Australia often skews comparisons with countries hit hard by the 2008 financial crisis, as in much of Europe. Over 2001-2015, Australian GDP grew by 50%. The OECD average was 28%, and the Euro area average was 14%.

Consider Greece: over 2008-2015 it cut public funding for public universities by 58%. According to the European University Association public university funding in Italy, Spain and Hungary also fell, by 17%, 22% and 30% respectively.

So, even if their public spending rates at times look higher in OECD metrics, we can’t assume universities in these countries are better-funded.

Read more: OECD figures are not what they seem in higher education

In fact, while Australian rates in some OECD metrics have risen faster than most, in many cases our GDP grew faster as well. The chart below shows how some countries with flat or falling rates of public funding (such as Italy, Portugal, Spain and France) also had flat or falling GDP.

The Australian tertiary sector is better-financed than the OECD’s most popular (and most “damning”) statistics suggest. In reality, places such as Portugal do not invest more and our funding is not really 40% below the OECD average.

From government reporting and analyses by the Grattan Institute, the Mitchell Institute and others, we know Australian spending on tertiary education has risen rapidly over the years. Compared to many others, ours is a big system growth story. In the end, Australian policy and funding debates are better served by tracking domestic data, and more informed and transparent use of the most relevant OECD metrics.