A conventional documentary presents a singular argument or perspective. But Zanny Begg throws out the conventions in her film, The Beehive, by presenting 1,344 possible versions of the narrative. This prompts us to question how knowledge is constructed.

The Beehive is about the unsolved murder of the 38 year-old Sydney newspaper publisher and anti housing-development campaigner Juanita Nielsen in 1975. Nielsen’s body has never been found, and the identity of her murderer has long been the subject of speculation. Although no one was convicted, it is widely believed that her activism against big-town corporate development was instrumental in her murder.

The title, The Beehive, alludes to both Nielsen’s hairdo and a recurring motif of bees and their communal ways of living and working throughout the film.

Although presented in a linear form (a 30-minute documentary), the narrative of The Beehive is non-linear. It is comprised of sequences from which the viewer attempts to make sense of the landscape of Kings Cross and Sydney in the 1970s and its relationship to current issues around housing affordability and development, violence against women, Indigenous history, trade unions, activism and sexuality. But how you piece together these events depends on which version or versions you happen upon during your visit.

The film includes interviews with activists and those that knew Nielsen at the time. They give background and context, although this is only ever partial. Twelve different Juanita Nielsens, played by a refreshingly racially diverse array of actors, reflect on her persona while also giving insight into the struggles that many women today face in finding affordable housing.

The Beehive also includes re-creations at the Carousel Club in the Cross, where the murder is believed to have happened; as well as poetic and metaphoric images of bees and the rooftop beekeeper.

The beginning and the ending of each version are more or less the same, but the sequences in between vary. These are shuffled by an algorithm which produces one of the 1,344 possible combinations. The Beehive rewards repeated viewing. Over three visits I saw nine different versions. Each time there was new material, presented in different contexts, and increasingly varied ways.

On my first visit, I entered the gallery where the film is being exhibited midway through an interview about housing development and affordability but the subsequent few versions I watched did not include this material. Instead, they were more heavily focused on the recreations at the Carousel Club, which seemed to assume a kind of preexisting knowledge and context.

In one of the versions I watched, an interview with sex worker activist Julie Bates situated Nielsen’s campaign among other important movements of the era and within a history of grass-roots activism in Sydney.

In another, a conversation between a local Aboriginal woman and Nielsen (here played by Pamela Rabe) foregrounded the history of violence against Indigenous women. And in another version, Nielsen’s former partner David Farrell gave a more personal account of her nonconformist lifestyle. 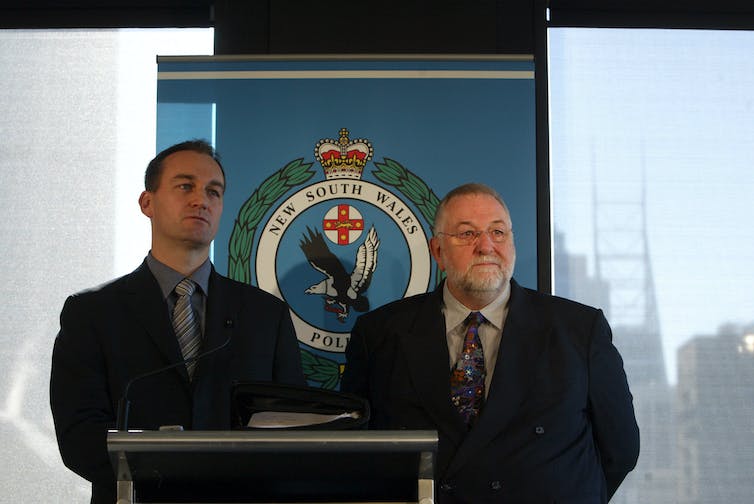 Det Sgt Nigel Warren (left) and the former partner of Juanita Nielsen, David Farrell, speak during a 2005 media conference to mark the 30th anniversary of her disappearance and presumed murder. AAP Image

Each of these configurations, and the way certain elements are highlighted, works to create a different perspective of Juanita and a different lens through which we view her murder.

The Beehive joins a collection of recent Australian documentary works focused on unsolved murders of women. These include the ABC podcast Trace, about the murder of bookshop owner Maria James, and The Australian’s The Teacher’s Pet, about the murder of Lyn Dawson. However, rather than presenting a journalistic investigation into Nielsen’s murder, Begg uses a range of strategies in her hybrid documentary.

By presenting 1,344 versions through a randomising instrument, devised by programmer Andy Nicholson, The Beehive dismantles the idea that documentaries can impart unequivocal knowledge about the world.

While The Beehive is the important story of an unsolved murder of someone who spoke truth to power and campaigned against gentrification and the erasure of community, the film’s form makes us do the cognitive work of connecting the pieces and finding patterns.

In presenting us with more versions than we will surely watch, and an awareness of material that we will not see, The Beehive highlights not only what can be known, but also what cannot.

The Beehive is showing at ACMI, Melbourne, until November 4.