If you’re having trouble sleeping, medicines shouldn’t be your first option. Exercise regularly, cut back on coffee (and other caffeinated drinks) after midday, eat less in the evening, ease up on “screen time” before, and in, bed, practise meditation and try to have a quiet, dark bedroom dedicated mostly to sleep.

But what if you’ve tried everything and are still struggling with sleep? Many people will want to turn to a medicine for help. Navigating the various options for effectiveness, safety and the potential to become habit-forming can be difficult.

Long-term regular use of medicines to promote sleep should be avoided, as initial effectiveness declines rapidly over a few weeks and dependence and adverse effects become problematic. But in the short short term, sleep medications do have their place. Unfortunately they are often over-used, especially in older people.

Read more: Why getting enough sleep should be on your list of New Year's resolutions

Benzodiazepines are drugs such as Valium, also used to treat anxiety. They are the most commonly prescribed sleeping pills.

Their effects, which include some muscle relaxing properties, are achieved by enhancing the effect of GABA, an inhibitory neurotransmitter operating throughout the brain. Rarely, some people experience the opposite and become over-excited and more anxious.

As benzodiazepines depress brain function (they depress the central nervous system), their effects add to other central nervous system depressants including alcohol, sedating antihistamines and opioid analgesics such as oxycodone (Endone). This can be very dangerous, and when combined can lead to respiratory failure, coma and even death.

Physiological and psychological dependence on the drug can develop after only a few days in some people, or weeks in most. Unfortunately, far too many people are dependent.

Importantly, the effectiveness for inducing sleep wears off after a few weeks. It can be very hard to stop taking benzodiazepines as insomnia and often anxiety returns. The duration of “withdrawal” is related to the length of time these are taken.

Stopping suddenly after long-term use can be dangerous, with violent withdrawal reactions possible, including epileptic seizures. Ceasing these medicines needs to be managed by your doctor. Essentially, a gradual reduction in dose is needed with support and counselling to assist with the temporary increase in insomnia and perhaps anxiety.

Side effects include a “dulling” of cognitive function, memory impairment and the increased risk for accidents, especially unsteadiness and falls in older people.

Benzodiazepines should only be used for two to four weeks, or intermittently, and only in addition to good sleep hygiene (that is, practising the measures listed in the first paragraph).

Temazepam (brand names Normison, Temaze, Temtabs) and lorazepam (brand name Ativan) are reasonable choices from the many benzodiazepines available. That’s because they have a faster onset and short duration of effect so as to avoid a “hangover” the next day.

Read more: Health Check: how to soothe yourself to sleep

Zopiclone (brand names Imovane and Imrest) and zolpidem (brand name Stilnox) are similar in their pharmacology and effects to the benzodiazepines. These prescription-only medicines also enhance the actions of GABA to depress brain activity and have the same hazards related to excessive sedation and dependence.

Bizarre behaviours and symptoms, for example hallucinations and sleep-walking that can be dangerous, are more likely than with benzodiazepines. 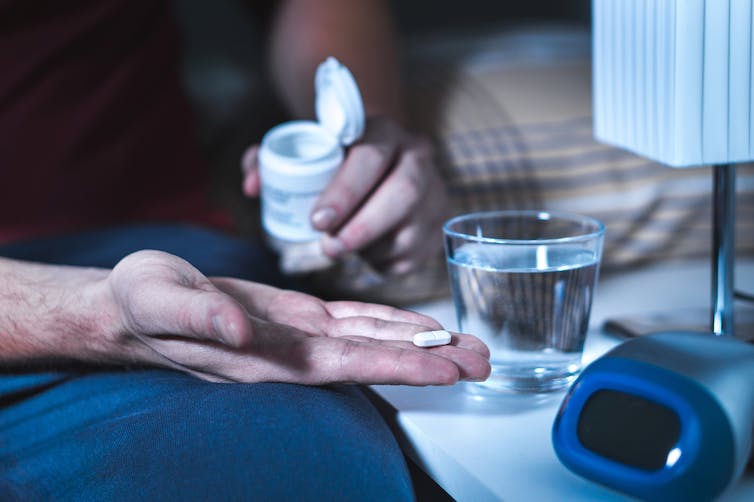 Medications for sleep can’t be used long term. from www.shutterstock.com

Especially in those with allergies such as hay fever disturbing their sleep, these may be a reasonable short-term option. Dependence on these medications to sleep is a hazard.

These medicines have side effects including dry mouth, blurred vision, constipation, confusion, dizziness and urinary retention in men with prostrate problems. All side-effects are worse in older people.

By contrast, over-the-counter antihistamines commonly used to treat hay fever (such as brand names Telfast, Zyrtec and Claratyne) are non-sedating, and therefore not likely to make you drowsy.

Any opioid-containing medicine, all now requiring a prescription, will induce drowsiness (depending on the dose) because they also depress our central nervous system. Codeine (in Panadeine, Panadeine Forte or Nurofen Plus), tramadol, tapentadol, morphine or oxycodone will make us sleepy, but they’re not recommended to treat insomnia.

These powerful medicines are best reserved for judicious use in pain relief, given the severe hazards of dependence and overdose. Older people are more sensitive to the central nervous system-depressing effects and also to constipation.

Our sleep-wake cycle is dependent on the hormone melatonin released cyclically from a gland in our brain. Melatonin administered orally helps induce sleep in some people, but is not as effective as other sedatives.

However, a recent Australian study tested melatonin in people with sleep problems caused by delayed melatonin release in their brains. These people have trouble falling asleep and waking at times appropriate for proper functioning.

Taken one hour prior to bed time, melatonin (0.5mg) accompanied by a behavioural intervention (such as learning how to meditate) helped the participants get to sleep and improved common accompanying impairments such as low mood, anxiety and difficulty concentrating.

You need a prescription for melatonin in Australia. It’s best to avoid alcohol as it interferes with sleep, thereby reducing any effect of melatonin. It is worth trying as it is generally well tolerated, although some people experience back pain. It may work in other types of sleep disturbances, not due to delayed release of melatonin. A dose of 2mg, controlled release one to two hours before bedtime is most commonly used.

Antipsychotic medicines (such as quetiapine) have been increasingly used to treat insomnia.

Typically used at a lower dose, quetiapine can induce sleep but carries a significant burden of possible harmful effects. These include a fast heart rate, agitation, low blood pressure and unsteadiness. These make quetiapine not appropriate for treating common sleep problems.

Antidepressants are typically prescribed at a low dose for insomnia, but the supporting evidence of efficacy (despite the wide use) is low quality and there is the risk of adverse effects such as confusion, dry mouth and blurred vision.

Herbal remedies such as valerian, lavender, passiflora, chamomile, hops and catnip are widely promoted to promote “sleep health”. Research to support their efficacy is limited.

Read more: We asked five experts: is it possible to catch up on sleep?

Many newer and emerging medicines are being tested for insomnia, so in the future more options should be available.

For now it’s important to remember none of the options listed above is without side effects, and most will cause dependence if used long term, meaning falling asleep without them will be even harder than it was before.

Improve your sleep hygiene, and if that hasn’t worked for you, speak with your doctor about what’s keeping you up at night. She’ll be able to prescribe the best type of medication for you to use in the short term.