For people living in Australia’s residential aged-care facilities, these needs are often not met.

Most residents do not feel they are loved or belong in the facility. Like aged-care resident Neda Borenstein, whose secret camera footage broadcast on ABC’s Four Corners showed her singing the Australian national anthem in bed while she waited more than three hours to be changed. “I’m just a number,” Neda told her carer when she finally returned to help her up.

Less than one-third of residents we interviewed said they were friends with another resident. This means most don’t have the social support associated with friendships. Most residents said they felt socially isolated, which is associated with poor well-being.

A 2016 study of residents’ lived experiences in an aged-care facility found many felt they had little dignity, autonomy or control. Outside of meal and structured activity times, people with dementia spend most of their time stationary, alone and doing very little or nothing.

One study looking at interactions between residents and their carers showed residents were alone 40% of the time they were observed. When staff were present, they mostly did not engage verbally, emotionally or physically with the resident.

Aged-care facilities can also feel psychologically unsafe to residents. Residents with dementia may be locked in secure units or physically restrained, using mechanisms such as bedrails or restraining belts.

Residents sometimes don’t get along. They might argue yell, swear, pinch, hit or push each other. We don’t have good data about how often resident-to-resident verbal and physical aggression happens, but it can result in injury and even death.

Read more: Violence between residents in nursing homes can lead to death and demands our attention

The consequences of unmet needs?

Residents can react negatively when their needs are not met. They become bored, sad, stressed, cranky, anxious, depressed, agitated, angry and violent.

In many facilities, staff “manage” such reactions with the use of sedating antipsychotic medications. But clinical guidelines recommend looking at the reasons people may be reacting that way and addressing those before medication.

Read more: Too many Australians living in nursing homes take their own lives

We might not be spending enough on aged care to enable providers to meet fundamental human needs. Australia spends about 1% of its GDP on long-term care – less than the OECD average of 1.5%.

Private investment in aged care is growing, as have residential aged care profits, but it’s a difficult industry in which to make money. Insufficient funding translates to insufficient staff and less skilled staff. Our funding system rewards dependency, and there are no funding incentives for providers to improve the psychological well-being of residents, or go beyond that to help them flourish. 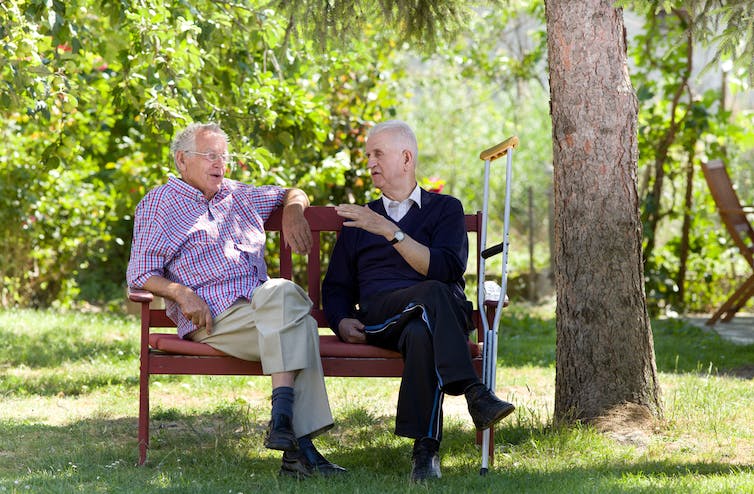 Friendships are an important part of healthy ageing. from shutterstock.com

People looking for a nursing home don’t have any independently provided information by which to compare quality or performance.

The National Quality Indicator Program – a program for measuring care in residential aged-care facilities that began in 2016 – was meant to provide information for people trying to compare facilities on clinical indicators of care quality.

But participation in the program is voluntary for providers. Neither quality of life nor emotional well-being indicators are included in the suite of quality indicators (even though one has been trialled and found to be suitable). We also don’t know if or when the data might be published.

We need a fundamental shift in community, government, service provider, staff and regulatory expectations of what residential aged care does. Our model of aged care is mainly about clinical care, while neglecting emotional care.

For instance, friendships are a unique social interaction that facilitate healthy ageing, but many residents told us that the social opportunities in their nursing home did not align with their expectations of friendship.

We need our model of care to be a model of a home. In a home everyone contributes, has a say in what happens in the home (such as the menu, interior design, routine and functions), is able to invite their friends to their home for a meal, and can leave during the day and come back at night. A home is a safe place, where people are loved and nurtured, and where they can be active and fulfilled.