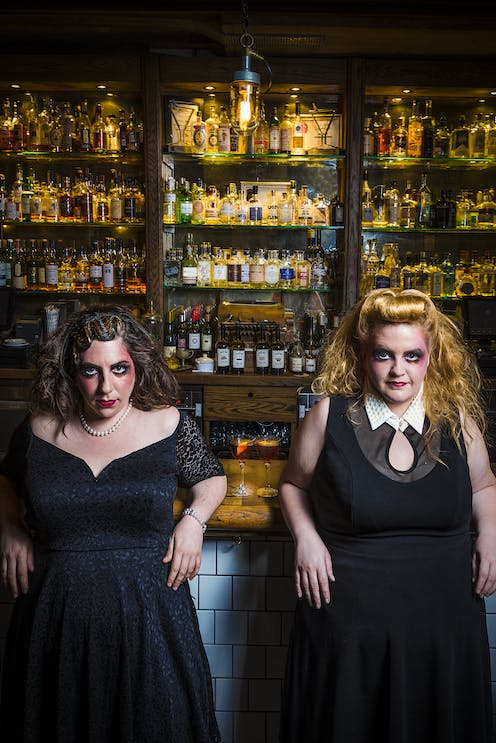 At first glance, a cabaret show about a beverage seems an unlikely vehicle for a socio-political, feminist discussion. But, cloaked in extraordinary musical arrangements, this is precisely what Maeve Marsden, Libby Wood, Jeremy Brennan and their collaborators have achieved with Mother’s Ruin: A Cabaret About Gin.

To paraphrase Marsden: when you are three songs in and you’re already discussing government control and feminist propaganda, you know you’re in for quite a ride!

This “60 minute theatrical cabaret”, written as a collaboration between Marsden, Wood and Brennan as well as gin enthusiast Elly Brennan (The Ginstress) and director Anthea Williams, comes to Brisbane after sold out seasons around Australia and internationally. The show features music originally performed by Sia, The Pretenders, Martha Wainwright and more with cleverly reworked lyrics to tell the history of the sometimes maligned and sometimes celebrated drink.

Read more: No, enjoying a gin and tonic doesn't mean you're a psychopath

The most notable element of this show is the incredible detail that has gone into every element of the performance. From the cocktail shaker maraca to the set consisting mostly of a huge assortment of empty gin bottles, this is extremely finely-crafted cabaret.

The historical research is astounding, weaving tales of how gin was demonised by the beer lobby in 18th Century London, and the development of tonic as a cure for malaria in colonial South America. Gin and tonic came to be paired by British officers in India in the early 19th century to make the medicinal quinine more palatable for soldiers in the British East India Company.

The local story of Merle Thornton’s stand at Brisbane’s Regatta Hotel in the fight for “drinks for women” was particularly well received on opening night. Thornton and her friend Rosalie Bogner chained themselves to the public bar in 1965 to protest the laws against women drinking in these bars in Queensland hotels. The law was eventually revoked in 1970.

Musically, there is a stunning range of colour in the singing and arrangements. The harmony work from Marsden, Wood and Brennan is particularly beautiful. Some of the musical highlights included Wood’s hilarious “malarial burlesque” reading of Peggy Lee’s Fever, Marsden’s moving rendition of Martha Wainwright’s Bloody Mother F—ing Asshole from the perspective of an Australian housewife seeking solace in a bottle of gin, and a gorgeous a capella arrangement of The Pretender’s Hymn To Her.

The comedic timing is well-oiled after two years of regular touring and the jokes have lost none of their punch. A rap about the origin of gin, some rousing audience singalong moments and a virtuosic list of an impressive number of gins in the closing song “I’ve Drunk Every Gin, Man” keep the laughs rolling between the serious elements of the show.

A running joke in which the women regularly produce small bottles of gin from their secret storage space is perfectly brought home in the finale.

Mother’s Ruin is a stellar example of how cabaret as an art form can be informative, provocative, beautiful and hilarious all at once.

Mother’s Ruin is being staged at La Boite until September 22.