What is the role of commemorative exhibitions that focus on the life of a single change agent I asked myself, as I viewed Melbourne Museum’s latest blockbuster, Mandela My Life: The Official Exhibition.

The result of an international collaboration between Museums Victoria, the Nelson Mandela Foundation and IEG exhibitions, the exhibition is billed as a major international event that “will commemorate, illuminate and most importantly share Nelson Mandela’s living legacy with the world” on the centenary of his birth.

At first glance I doubted that these aims could be achieved. The tone of the exhibition could be accused of being hagiographic, given the ostensible reason for the exhibition – to celebrate the centenary of Mandela’s birth – as well as its narrative structures, which blended Mandela’s own words with the editorialising of the Mandela Foundation. This lent support to the claim that this exhibition was the “official” version of how to interpret the meaning of Mandela’s life. 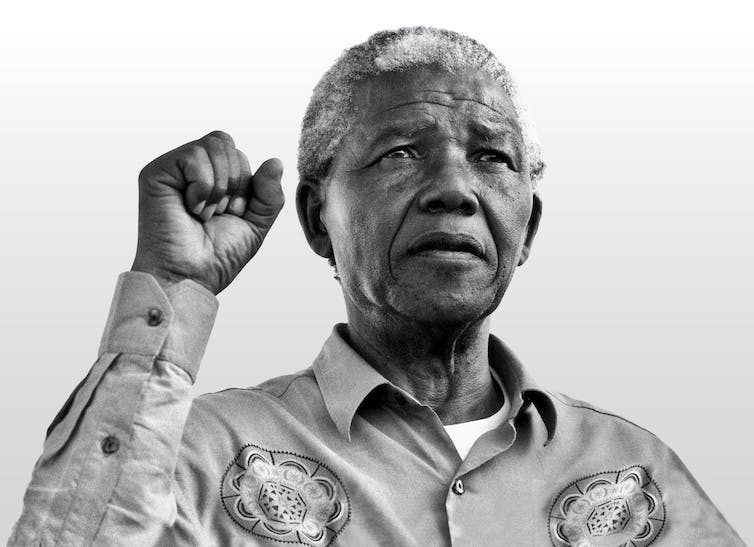 Keith Bernstein Read more: Revisiting Nelson Mandela’s roots: a photographic exploration Organised chronologically, the exhibition follows Mandela’s life. It begins with his birth in the Transkei region of South Africa, where he was initiated into his tribe’s traditional cultural practices and knowledge systems and attended a mission school. The exhibition then follows him as he decides to leave his homeland for Johannesburg, where his experiences under apartheid radicalised him, leading on towards his role as a leader in the African National Congress, and his eventual imprisonment. His resilience while in prison and his leadership of the new post-apartheid South Africa led him to become the revered figure he is today. This simple chronological narrative is given emotive force by three elements that come into play. The first of these is the sound of Mandela’s voice at key moments. These include his famous Rivonia Trial speech in which he stated that he was prepared to die for the anti-apartheid movement. Others are his memories of his childhood in the Transkei, his reflections on his time in prison, and his speech when he was freed, where his conciliatory approach to ending apartheid set the tone for what was to follow. Mandela’s voice guides us through the exhibition, supported by a rich display of personal photographs, letters and personal objects carefully preserved by the Mandela Foundation. 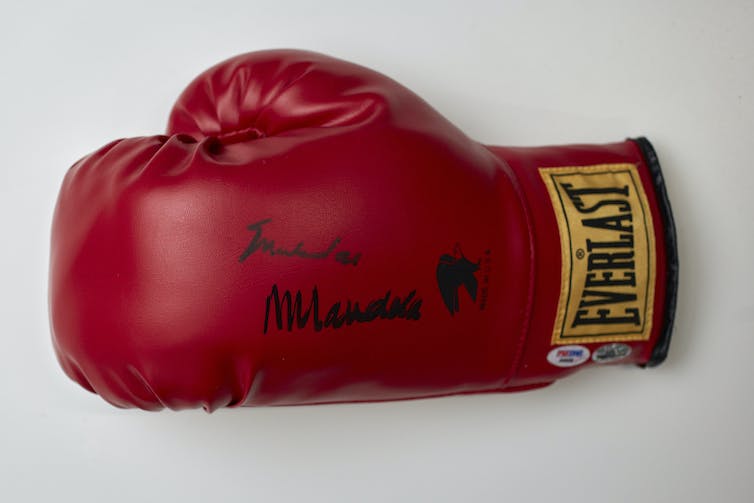 Boxing glove signed by Muhammad Ali. Nelson Mandela Foundation. Photo: Jon Augier/Museums Victoria These are then contrasted with the evidence of apartheid from material borrowed or reproduced from other collections and media organisations, which provides the second element. The role of these sources is to lend authority to the human rights claim that apartheid was an unjust system – they are the evidence of what goes wrong when equality between humans is not respected. The third element is the visitor – a visitor who already knows the end of the story and believes in its righteousness. Mandela was on the right side of history. None of this is wrong of course. But the desire to eulogise, as often appears to be the case in this exhibition, does not allow space for questions that might allow for a fuller explication of the nature of Mandela’s legacy and its relevance beyond South Africa. Read more: Centenary of Nelson Rolihlahla Mandela's birth: a tribute in poems For instance, the final gallery shows a series of 16 paintings by John Myer, retelling Mandela’s life story and giving body to South African’s pride in the achievements of this extraordinary man. This could have been the moment, however, when his legacy could have been broadened out and key themes explored and thus gone beyond the outpouring of grief on his death, captured by the 95 messages of condolence, one for each year of his life – available in the penultimate gallery via a table full of telephone handsets. 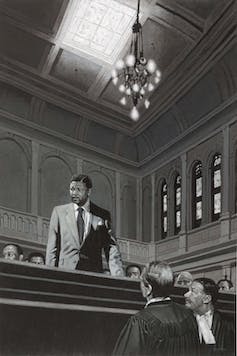 Prepared to Die, from the series Mandela A Life’s Journey, by John Meyer. Melbourne Museum Beyond the obvious answer – he was a hero who fought apartheid and won – what is it that those fighting for human rights can learn? What are the difficult questions his activism raises for those fighting on behalf of the oppressed? And, finally, are there other contexts in which his life might have meaning? In an Australian context, some of the answers were alluded to in the speeches on opening night, which pointed to the relevance of Mandela’s activism for Australians fighting for Indigenous rights. Such speeches go some way towards explaining why the Melbourne Museum, which is aligned with human rights museums and whose First Peoples Gallery is an eloquent articulation of the need for treaty, is host to this exhibition. But I would also argue that Mandela’s life is relevant to all of us at this particular juncture in time – a time when we need to hang on to the hope that change is both necessary and possible and that the actions of ordinary, everyday people can bring it about. This is as true for situations of unequal power relations as for other complex problems, such as what to do about climate change. Mandela was an extraordinary man – but he was also supported by many others, both within and outside South Africa, all of whom believed in the necessity of change. Mandela is important because we need to have figures who show us that hope, resilience and leadership is still possible when those values are valued by all of us. The exhibition does not make these points itself – but perhaps it is enough that such points can be made by those who visit it and reflect upon it. Even so, I wish there was less emphasis on the authorised, official nature of the exhibition, which, for me, closed down the potential for some really interesting discussions on the nature of change and how to achieve it. Mandela My Life is being exhibited at the Melbourne Museum until March 3 2019.