Like sport or hate it, it’s hard to deny the role that sporting lingo plays in our daily lives.

Corporate language everywhere groans with references of people leveling playing fields, getting balls rolling, moving goal posts, lighting fires under their teams, blocking and tackling, even touching base offline – and of course it’s...

Like sport or hate it, it’s hard to deny the role that sporting lingo plays in our daily lives.

Corporate language everywhere groans with references of people leveling playing fields, getting balls rolling, moving goal posts, lighting fires under their teams, blocking and tackling, even touching base offline – and of course it’s all done by the playbook and at close of play.

Perhaps it’s just not cricket, but politics is also rife with sporting lingo. Shirtfronting has escaped the on-field aggression of the AFL to cover diplomatic spats. Both the captain’s pick and captain’s call have slipped out of sporting jargon and onto the political football field. Political parties have even been accused of ball-tampering.

And so, we say to you, tenez! (“take, receive”), as a 14th century tennis player is believed to have called out before serving a ball (a French cry that reputedly gave tennis its name).

Allow us to bandy around (a tennis term) a few ideas here as we run with (a football term) a brief review of sporting lingo inside the bloody arena and throughout our daily lives.

Tickets and etiquette in ‘disport’

The word sport is a shortening of an earlier term disport, which from the 14th century broadly encompassed any form of relaxation or diversion.

In fact, from the 15th century, one meaning of sport was a playful reference to romance and lovemaking. This died off in the 18th century, but another 15th century meaning, “activity of skill and exertion with set rules or customs”, has withstood the test of time.

At sports events, you might see the reverse side of your ticket setting out rules of etiquette for spectators. Both derive from an Old French word estiquette meaning “note or label”. The word etiquette emerged in late 17th century French as a note detailing the rules and customs for engaging with the Spanish court.

But etiquette in modern sporting contests includes being nice to umpires. Sure, they make some tough calls, but so do we as English speakers.

After all, the word umpire actually derives from the Norman French noumpere, corresponding to “non-peer”, the one who stood out among peers. (Linguistic boundary lines have been problematic for some time — but that, as the saying goes, is a whole nother story.)

Umpires try to keep the peace, but more than a few words derive from the punishing and warlike nature of sport. Melbourne Demons coach Simon Goodwin said his team would learn from the “drubbing” they received from West Coast.

We can only hope he intended the modern meaning of drub (“beat badly in a sporting contest”), and not the meaning associated with drub‘s 17th century Arabic origins (“the flogging of feet”).

We’re surrounded by sporting language, much of it from sports to which we no longer pay much heed — some forgotten entirely.

Archery has been quiet contributor over the years. The verb to rove “wander about with no purpose in mind”, for instance, comes from a 15th century archery term meaning “shoot arrows randomly at an arbitrarily selected target”.

The original upshot was the final shot in a match (a closing or parting shot). The first bolt was a crossbow projectile.

Even those disapproving of the “sport” of hunting have to admire its contributions to language. A tryst, now “an assignation with a lover”, was originally “an appointed station in hunting”. A ruse, these days a general term for “deception”, was the detour hunted animals made to elude the hounds.

These sagacious “acute-smelling” hounds would occasionally run riot “follow the scent of animals other than the intended prey”. Retrieving was flushing out their re-found quarry and worry “seize by the throat” was what they did to it once they got it.

Read more: Get yer hand off it, mate, Australian slang is not dying

Hawking or falconry must have once played a central role in our lives for this sport has donated a number of expressions. Haggard was originally used to describe wild hawks, and to pounce derives from their pounces or fore-claws.

And reclaim or rebate referred to calling the hawk “back from flight”. It was carried out by a special pipe known as a lure, which is now a general word meaning “magnetism” or “attraction”. 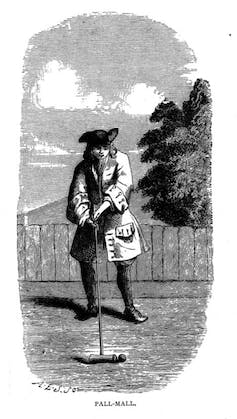 Some sports have completely disappeared but have left behind relics in some common expressions. Pall-mall (probably from Middle French pale-mail “ball-mallet”) was a croquet-like lawn game in the 16th and 17th centuries. It gave its name to straight roads or promenades (such as Pall Mall in London), before it then morphed into the shopping malls of modern times.

Even the medieval jousting tournament is the source of a few current expressions like break a lance, tilt at and at full tilt, meaning “at full speed”. (The tilt was originally the barrier separating the combatants and later was applied to the sport itself.)

These days, jousting refers generally to any sort of banter or sparring between individuals who might have thrown down or taken up the gauntlet, meaning “challenged” or “accepted a challenge”. (The gauntlet refers to the knight’s mailed glove).

Unlucky players might end up being thrilled (originally pronounced “thirled”), which doesn’t mean ecstatic, but rather pierced by a lance or spear.

Read more: 'Too fat to get drafted': the worrying body-image pressures in the AFL

Up there Cazaly!: on with the 'people’s tournament’

And so we cry Up there Cazaly! (after the famed footballer Roy Cazaly) — on with the Grand Final, a.k.a. the big dance. 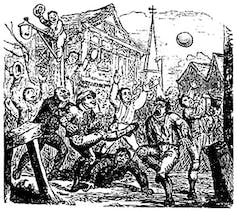 And spare a final thought for the “people’s tournament” — the medieval game that gave us the word football. As Heiner Gillmeister points out, there is evidence this game was also opened by the cry tenez!

Whether it was played in the monastery cloisters (the arches forming the original goals) or in an open space (so-called “mob football” played between two villages — a tough gig for the boundary umpire), it was a bloody and riotous affair getting that ball full of wynde to the target area.

As Sir Thomas Elyot put it in The Boke Named the Governour (1531):

Like sport or hate it, we hope you’ve found our linguistic shirtfronting here gentle, fun and appropriate as far as captain’s calls go.