The Australian Defence Force (ADF) banned lesbian, gay and bisexual personnel from serving openly until November 1992, and there were restrictions on transgender service until September 2010. Even so, we know LGBT people have always been serving bravely in the ADF.

In an ongoing research project with Macquarie University Associate Professor Shirleene Robinson, we have been documenting the histories of LGBT service members, many of whom suffered discrimination, surveillance and punishments while serving in the closet.

Our research culminated with a brief I sent to 14 Australian parliamentarians last week recommending a public apology and redress scheme for LGBT soldiers who suffered indignities and saw their careers come to an end during this time in history.

Our research entailed examining Defence records and media reports and interviewing 130 former and current LGBTI service members. What compelled me to write the brief were some of the harrowing tales ex-service members told us.

Read more: Witch-hunts and surveillance: the hidden lives of queer people in the military

Until 1992, service police would surveil suspected LGB people, send undercover cops into gay and lesbian establishments and sometimes conduct secret searches. Interrogations of accused homosexuals could go on for hours or days, normally ending only when the suspect confessed. Authorities then delivered an ultimatum: either request their own honourable discharge, or be dishonourably discharged.

One of the ex-service members we interviewed was Shane, a leading aircraftman who was one of five gay men caught by the RAAF Police in late 1981 and compelled to leave the service. He says it felt like “bringing shame to the family name.”

There was Gen, an Army captain who was five years into her service when her superiors discovered she was a lesbian in 1988. Her superior officer gave her a weekend to decide whether to resign or face a court martial.

I had expected to have a long and relatively successful career […] I was doing a good job and all of a sudden it was over.

Bridget, another Army captain, was dismissed in March 2010 when she announced her intention to transition from male to female. Bridget challenged her dismissal in the Australian Human Rights Commission, culminating in the ADF rescinding the ban on transgender service. Bridget continued to face discrimination, however, and was finally discharged in 2011. 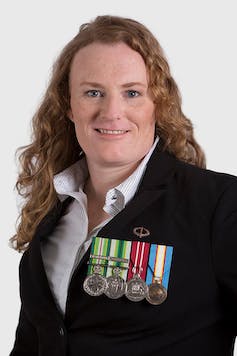 Precedents for apologies and redress

What stands out from these and other oral histories is the need for healing. Even decades later, many ex-service members maintain a feeling that the ADF abandoned them and there has never been a proper reconciliation.

These service members – and the hundreds of others who endured discrimination –deserve a public apology from the Commonwealth government.

There is precedent for such an apology. State and territory governments across Australia have apologised for past laws and police actions discriminating against LGBT people.

Read more: 'I didn't know that world existed': how lesbian women found a life in the armed forces

The Commonwealth has also apologised for wrongs perpetrated against other marginalised groups, such as the Stolen Generations.

Apologies are most effective when they are accompanied by opportunities for redress. For instance, all state and territory governments have passed legislation allowing individuals convicted for homosexual acts to have their convictions expunged or expired. LGBT service members who were dishonourably discharged should be allowed to have their records amended to honourable, as well.

The Royal Commission into Institutional Responses to Child Sexual Abuse has also charted a path for a national redress scheme of this type, albeit one focused on financial compensation for victims.

There are challenges with this type of redress, including how to determine compensation levels, who should be eligible and how the money will be allocated.

Redress for LGBT service members could include financial compensation for a small number of people, though this is certain to be a lightning rod for opposition.

In some cases, however, redress could entail a personal apology delivered by senior ADF officials. In others, it may involve updating service or medical records to reflect the psychological trauma inflicted at discharge, making the Department of Veterans’ Affairs liable to pay for ongoing treatment. 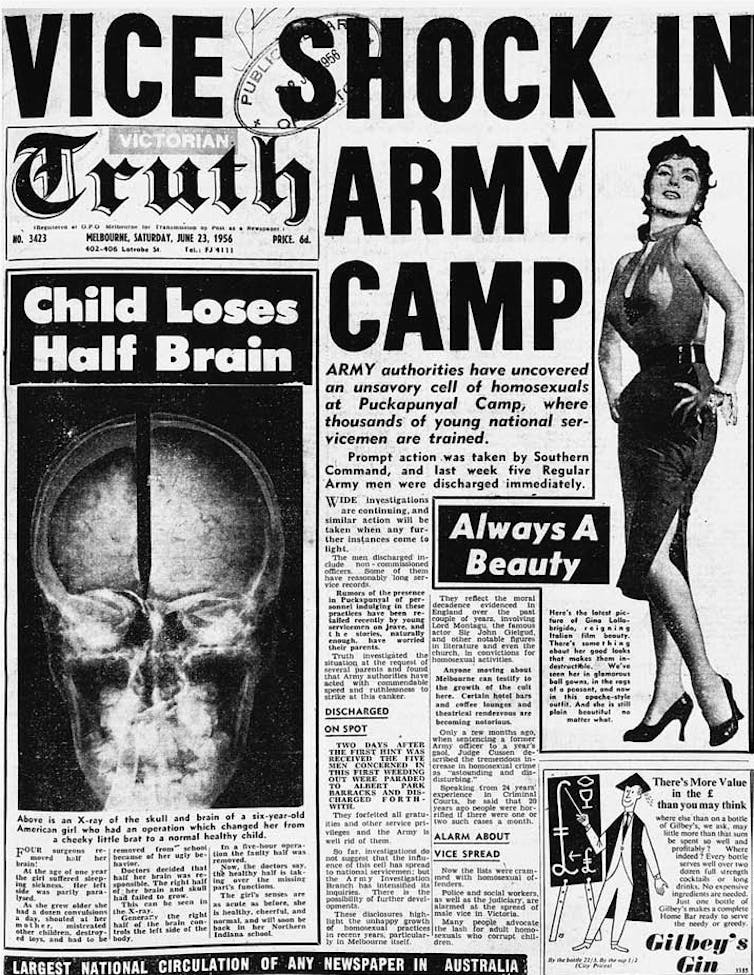 News report on five gay servicemen discharged from the Army in 1956. Author provided

While apologies are largely symbolic, they are deeply meaningful to those who have been wronged.

My interview with Alix highlighted the importance of restorative justice. Alix was a senior lieutenant compelled to discharge from the Army in 1989 because of her sexual orientation. She suffered physical duress and mental abuse during her interrogation and spent the next two decades fighting the ADF and the Department of Veterans’ Affairs in search of justice.

The first time Alix was treated with respect was when she went through the Defence Abuse Response Taskforce (DART).

DART was the redress scheme set up in the aftermath of the ADF abuse scandals exposed in 2011. Current and former ADF members who suffered physical, sexual, verbal or mental abuse were eligible to apply for a restorative justice package. They were assigned case workers to investigate the abuse allegations and, when appropriate, develop a redress package that fit the victim’s circumstances.

Read more: Six months after marriage equality there's much to celebrate – and still much to do

Alix’s restorative justice package included financial compensation, changes to her Army medical record to facilitate access to Veterans’ Affairs benefits and a personal apology delivered by the then-Chief of Army (and now Chief of the Defence Force), General Angus Campbell.

A few of our other interview participants also went through DART, and they overwhelmingly endorsed it as a respectful, affirming process. Given its success, DART could be the template for a similar redress scheme for LGBT ex-service members who were mistreated or discharged for their sexual orientation.

An apology and redress scheme should be a non-partisan response to a dark period in our nation’s history. The words of Mark, discharged from the Army in 1988 because he was gay, sum up the importance of this step:

it would have been a job and a career that I would have loved to have continued doing, but unfortunately, that was taken away from me.