The death toll from the magnitude 7.5 earthquake and resulting tsunami that struck near Palu, Indonesia, on Friday evening continues to rise, with several regions yet to be reached by rescue teams.

But the size and location of the earthquake should not have come as a surprise. Palu is situated at the end of a long, narrow bay which is the surface expression of a very active fault, the Palu-Koro fault.

The area is at high risk of tsunami, with several large earthquakes and tsunamis occurring along the fault within the past 100 years.

Read more: Explainer: after an earthquake, how does a tsunami happen?

Details of Friday’s incident are limited, but already there are questions being asked about the effectiveness of Indonesia’s tsunami warning system. 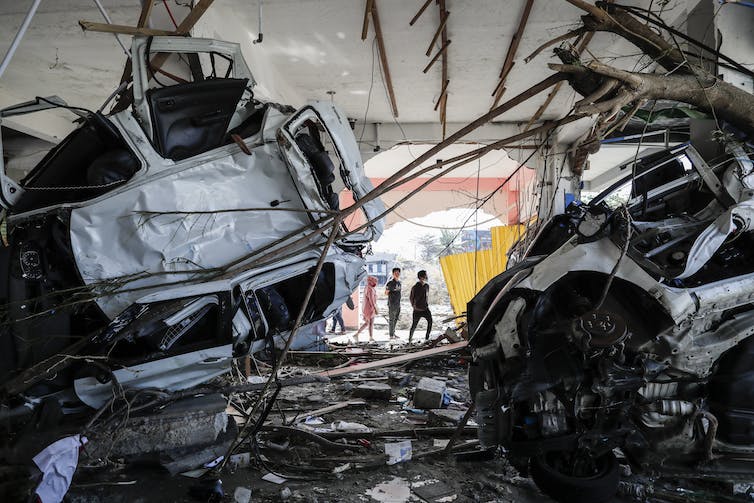 It was developed after the devastating 2004 Boxing Day tsunami that occurred after an earthquake near Sumatra, but in this recent event the warning did not reach many of the people who were affected.

The tsunami occurred in an area where there are no tide gauges that could give information about the height of the wave. There are reports that a more high-tech system could have saved lives if it had been fully implemented.

Most of Indonesia’s deep ocean tsunameter buoys, specially designed to detect tsunamis in the open ocean, have not been working since 2012.

The Indonesian Tsunami Warning System issued a warning only minutes after the earthquake, but officials were unable to contact officers in the Palu area. The warning was cancelled 34 minutes later, just after the third tsunami wave hit Palu. 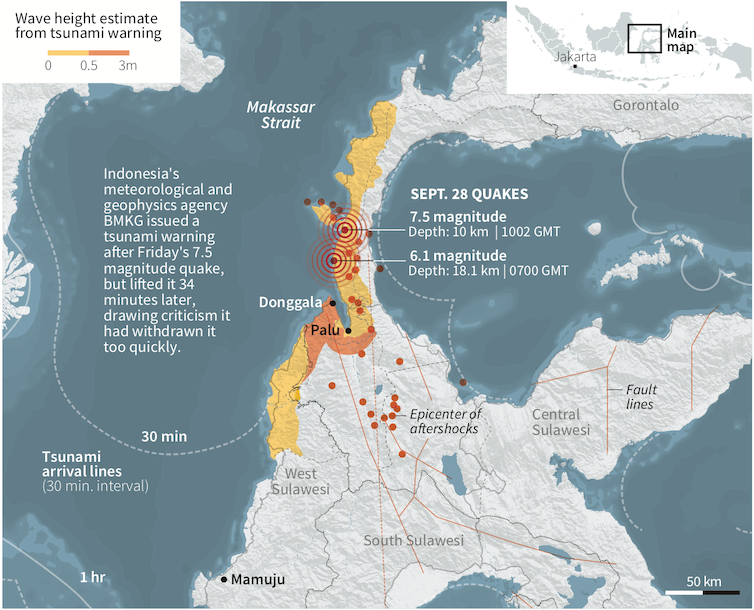 Map locating the city of Palu in Sulawesi island, which was struck by a tsunami on Friday. USGS/Indonesia Tsunami Early Warning System/Reuters

Large earthquakes are not uncommon in Palu, with 15 events over magnitude 6.5 occurring in the past 100 years. The largest was a magnitude-7.9 event in January 1996, about 100km north of Friday’s earthquake.

Several these large earthquakes have also generated tsunamis. In 1927, an earthquake and tsunami caused about 50 deaths and damaged buildings in Palu. In 1968 an earthquake with magnitude 7.8 near Donggala generated a tsunami wave that killed more than 200 people.

Despite this history, many people in Palu were not aware of the risk of a tsunami following the earthquake. Ten years on from the 2004 Boxing Day tragedy that killed at least 226,000 people, there were concerns about tsunami warning systems across the region.

An advanced warning system currently only in the prototype stage may not have helped the people of Palu, as the tsunami struck the shore within 20 minutes of the earthquake.

The sides of the bay are steep and unstable, and maps of the sea floor suggest that submarine landslides have occurred there in the past.

If the tsunami was generated by a submarine landslide within the bay, tsunami sensors or tide gauges at the mouth of the bay would not have sensed the tsunami wave before it struck the shore in Palu.

High tech tsunami warning systems are able to send out warnings through phone networks and other communications channels, and reach the community through text messages and tsunami sirens on the beaches.

But in areas where a devastating earthquake has occurred, this infrastructure is often too damaged to operate and the warning messages simply can’t get through. In Palu, the earthquake destroyed the local mobile phone network and no information was able to get in or out of the area. 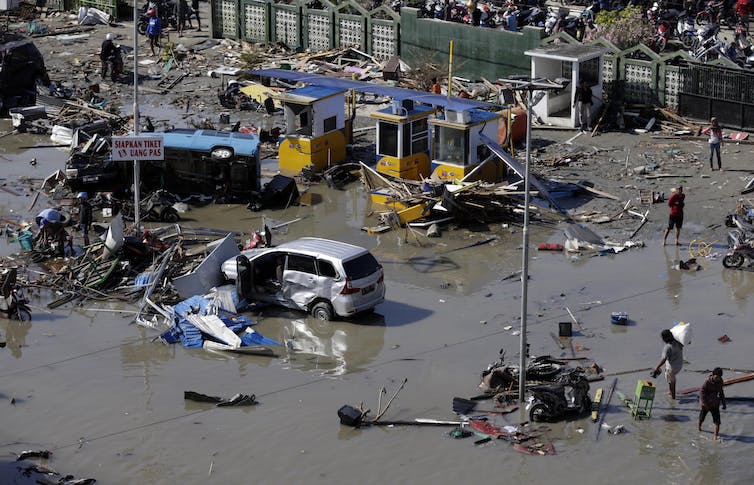 Timing is also crucial. Official tsunami warnings require analysis of data and take time – even if it is only minutes – to prepare and disseminate.

This time is crucial for people near the earthquake epicentre, where the tsunami may strike within minutes of the earthquake. Those living in such areas need to be aware of the need to evacuate without waiting for official warnings, relying on the earthquake itself as a natural warning of a potential tsunami.

The need to raise awareness of the risk becomes even more challenging when large tsunamis occur infrequently, as in Palu. Many residents would not have been born when the last tsunami impacted the town in 1968.

So high tech warning systems may not be effective in areas close to the earthquake epicentre. Ongoing awareness and education programmes are the most important part of a tsunami warning system in coastal areas at risk of tsunami, no matter how infrequently they occur.