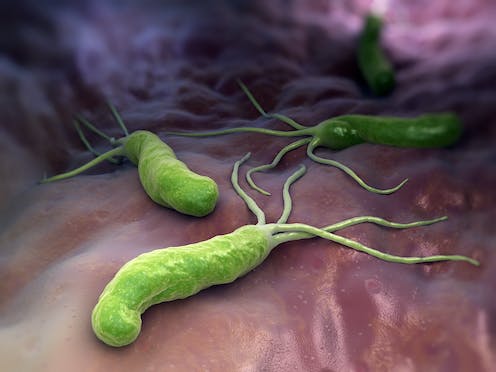 In 1982, two Australians – Robin Warren and Barry Marshall – presented their first observations of strange bacteria living in the human stomach. They went on to propose that these bacteria caused a common condition called gastritis, which is essentially inflammation of the stomach.

This radical suggestion was not well received by doctors at the time. To convince sceptics, Marshall famously infected himself with a culture of these bacteria, causing him to develop gastritis.

These bacteria, which became known as Helicobacter pylori, look like curved rods with a bank of structures called flagella at one end. These flagella beat like arms to propel the bacteria around the stomach.

Around half the world’s population is infected with Helicobacter pylori, although this varies between countries and age groups, with the highest rate among the elderly. Around 15% of Australians are infected.

Helicobacter pylori normally infect the stomachs of children where, in most cases, they stay for ever.

In developed countries such as Australia, it appears likely to be spread from mouth to mouth and mother to child. In developing countries, it might also be spread in contaminated water, though this is not proven.

Most infected people are blissfully unaware of their little passengers. But in around one in five infected people, the resulting gastritis can, many years later, lead to one of several diseases including peptic ulcers – open sores in the lining of the stomach.

It was for discovering the link between Helicobacter pylori, gastritis and peptic ulcers that Marshall and Warren received the Nobel Prize in Physiology and Medicine in 2005.

Gastric adenocarcinoma is the fifth most common cause of death due to cancer in the world and claims around 1,200 Australian lives each year. At least 90% of these cancers are thought to be caused by Helicobacter pylori, with this disease occuring due to genetic abnormalities that develop in stomach cells as a result of constant and severe gastritis.

People with ulcers or other gastric problems can be tested for Helicobacter pylori infection in a number of ways, including the following three tests:

A single antibiotic would be prescribed to treat most bacterial infections. But treating a Helicobacter pylori infection is far more complex. It commonly involves two or three antibiotics, delivered with a drug called a proton pump inhibitor, which temporarily reduces acid secretion in the stomach.

Some people who undergo treatment don’t actually clear the infection in the first go, although they do normally do so with subsequent alternative drug combinations.

Many things have changed over the past 36 years. Prior to 1982, ulcers were believed to be caused by stress and/or the overproduction of stomach acid. People with these common conditions often suffered for years. Also the cause of gastric adenocarcinoma was unknown.

Marshall and Warrens’ discovery that Helicobacter pylori cause gastritis means peptic ulcers can now be cured; in many countries including Australia, these have now become relatively rare conditions.

Read more: Is it OK for medical students to practise on themselves?