More than a quarter of commercial honey brands have potentially been watered down with sugar cane, corn syrup or other products, according to our new analysis of 95 products from local food markets and supermarket shelves.

Our discovery is set to deepen the concern over the authenticity of honey for sale in Australia, in the wake of last month’s “fake honey” scandal, which revealed the widespread adulteration of honey with cheaper substances.

Australia is the world’s fourth-largest honey exporter, and the revelations pose a threat to its reputation as a leading producer and supplier of honey.

Our study, published in Nature’s Scientific Reports, analysed 100 honeys from 19 countries, including Australia. The study included five raw honey samples (that is, honey direct from the hive) and 95 commercial samples, 38 of them from Australian-based producers.

Analysis of the 95 commercial honeys showed that 27% of them were of “questionable authenticity”, meaning they had potentially been adulterated with cane and/or corn syrups. This means they should not be classified as genuine pure honey.

Of the Australian-sourced commercial honeys we analysed, 18% were identified as likely to have been adulterated in a similar way. 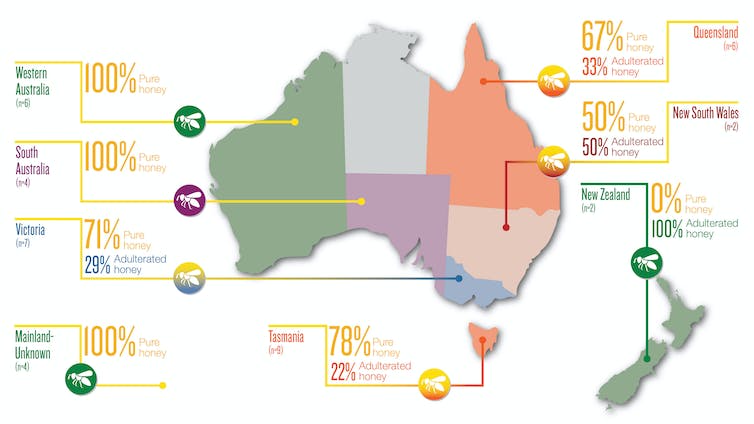 Our study used the only internationally accepted method for determining honey adulteration. This method detects the presence of sugars from a type of plants known as C4 plants – the group that includes corn and sugar cane – as opposed to pure honey, which is made from the nectar of flowers from a different group, called C3 plants.

C4 and C3 plants each have unique isotopic signatures, which allows us to ascertain whether a honey sample is pure (containing only compounds from C3 plants) or whether it has been adulterated with sugars from C4 plants.

Honey adulteration is nothing new. It has been on the rise since the 1970s, when cheap high-fructose corn syrup became widely available. Because both corn syrup and sugar cane are cheaper than honey, they are an easy way to increase honey volume and boost profits.

Some operators adulterate honey with rice sugars that enable them to circumvent the C4 test. Some rice syrup producers openly advertise the fact that their products will not cause adulterated honeys to fail the C4 test.

Honey can be adulterated either during or after production. Inadvertent adulteration might happen through overfeeding of sucrose to bees during periods when food sources are limited, or at harvest time. This practice, if done occasionally, can protect colonies at times of low food availability. But if used injudiciously it can also filter through into the finished product.

Of course, our study also comes hot on the heels of recent revelations that 12 of 28 Australian honeys were adulterated with rice and other syrups. That discovery was made using a new proprietary method that can reportedly detect adulteration with a wider range of compounds and also identify the geographic origins of the honey. However, this method does not currently meet the provisions of the Codex Alimentarius Commission, the international body that sets food standards.

Our research group has previously shown that honey can indeed be traced back to its point of origin, by comparing trace chemicals in bees and their honey with those in the dusts and soils where it was produced.

In our latest research, we therefore also investigated whether the commercial honey samples can indeed be tracked back to where they supposedly came from. We found that honey from different continents and regions do indeed have different chemical signatures, which paves the way for detecting mislabelled or geographically fraudulent honey.

Read more: How better tests and legal deterrence could clean up the sticky mess left behind by fake honey row

There is no evidence that adulterated honeys cause any significant health risk (beyond those posed by eating sugary foods anyway). However, in many cases consumers are not getting the supposedly genuine pure honey they have paid for.

But our research, along with previous studies, reveals the scale of the problem.

For Australian honey to retain its premium position in the global market, there needs to be a better framework around the chain of custody and certification of honey. Only then will customers have a guarantee that their “pure” honey is exactly what it says on the label.