Three, only three, is the number of women who have been awarded a Nobel Prize in Physics in the 117-year history of the prize.

Donna Strickland, aged 59 and an associate professor at the University of Waterloo, in Canada, is the female academic who this year was awarded the holy grail recognition for her major contribution to physics. She shares the 2018 prize with Arthur Ashkin and Gérard Mourou.

The last time a woman received the Nobel Prize in Physics was 55 years ago, when Maria Goeppert-Mayer won in 1963. Before that it was the exceptional Marie Curie who won the prize in 1903. In 1911 Curie also won the Nobel prize in Chemistry.

Strickland’s technique (powerful short laser pulses) was developed jointly with her PhD advisor Mourou, and is one of those major breakthroughs that any physicist would envy. It has myriad far-reaching applications, including in the field of medicine and the fight against cancer.

Some will see this award as a powerful response to the recent polemics that took place at CERN – one of the leading physics institutions in the world – after a male physicist argued at a workshop on equity and diversity that “physics was invented and built by men; it is not by invitation”.

CERN issued a statement saying that the physicist was suspended from any activity at CERN with “immediate effect, pending investigation” into the event.

Somehow this male physicist has forgotten that the Emmy Noether theorem, which he uses on a daily basis, was proposed by a female mathematician, Emmy Noether, whose work was critical for the development of what is now known as quantum field theory and particle physics.

So, yes, by awarding the Nobel Prize in Physics to a woman this year, the Nobel committee finally acknowledged the powerful contribution that a woman made, not only to a research field but to humankind.

Unfortunately, the reality is that this 2018 award to a female physicist is long overdue. The list of female physicists who did (and do) deserve the holy grail of scientific recognition is very long.

And yes, the list of male physicists who should have got it too is also very impressive. But it is striking that only three women have received the physics Nobel since its creation, and that Strickland – at 59 years old and after such a major contribution – is still an assistant professor at her own institution.

Peter Higgs, who was awarded a Nobel prize in 2013 for predicting the existence of the so-called Higgs boson (which was only discovered in 2012, many decades after its prediction), admits he had published a relatively small number of papers in his whole career. Was he an assistant professor? No. He had been promoted to professor of theoretical physics at the University of Edinburgh.

Let us be fair to the Nobel committee though. Somehow they have now repaired an injustice. The British astronomer Jocelyn Bell-Burnell discovered a new kind of star (pulsars) but was omitted when her PhD advisor (who had not made the observations but had obtained the funding for the observations) was awarded the Nobel Prize in Physics in 1974.

The now Dame Jocelyn was this year chosen by a panel of scientists to receive the US$3 million special Breakthrough prize in fundamental physics, in part for her work on pulsars but also for a lifetime of inspiring scientific leadership.

More acknowledgement for women in physics

There is still a gender gap in physics, and in science in general.

The last decadal plan for physics (2012-2021), released by the Australian Academy of Science, showed women only made up 21% of the staff in physics – that’s just one in five. The Science in Australia Gender Equity (SAGE) project notes the widening gap in men and women in senior roles in the natural and physical sciences.

Some of the data used in those reports are more than a decade old but more recent figures still show a wide gap in the number of men and women in physics and astronomy. 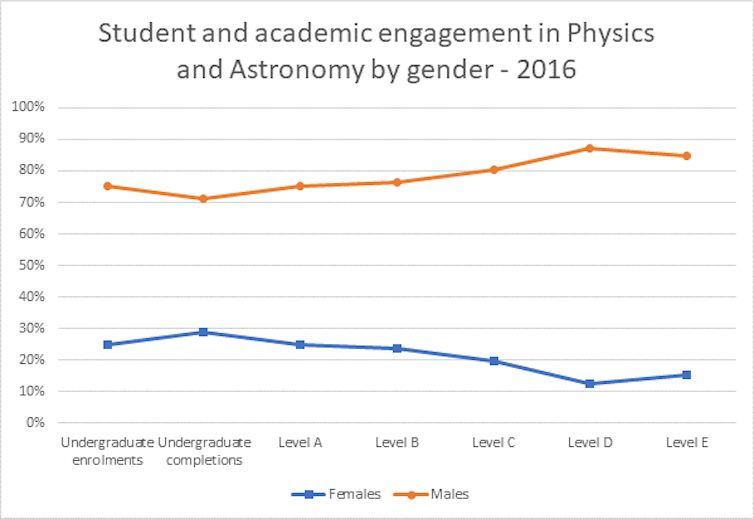 Field of teaching’ data from the Department of Education and Training Higher Education Statistics collection for 2016 (most recent data available). A major caveat with respect to the staff data is that this collection doesn’t include research-only positions, (i.e., it only captures academics with a full or part-time teaching load). It also doesn’t include casual or sessional academics. Australian Academy of Science

At least now with Strickland’s award, a female former PhD student is recognised at the same time as her male then advisor, Mourou. Perhaps one day, the Nobel prize will be awarded to two or three women physicists, one of whom is a student and the other one their advisor.

For now, we can only hope that by rewarding Strickland with a Nobel prize, the Nobel committee has sent a strong signal to academic institutions about the need to acknowledge the contributions of women in physics properly, and promote them adequately in the same way as their male counterparts for similar contributions.

My take on this: three is a magic number because it signifies a change that hopefully will inspire women and girls to enter physics and make contributions that change human’s life.