As I was writing this article, I was fortunate enough to be at a conference in Florence, Italy. Like a growing number of women who travel overseas, whether for work or leisure, many of the trips I’ve done in recent years have been alone. And as a digital criminologist (as well as a mobile app enthusiast), I’m certainly a convert to the practical usefulness of technologies for travel.

Then there are the more specific “safety” technologies. Some of them, like the Australian government’s Smart Traveller website, allow voyagers to register their intended whereabouts in case of a natural disaster or emergency. Travellers can also keep up to date with local risk and incident alerts, which can help you to steer clear if there is an incident in the city you’re headed to.

Others, like BSafe and Bugle, allow you to easily notify your emergency contacts if you feel unsafe, or do not arrive at your intended destination.

But while these apps might make you feel safer, it doesn’t necessarily follow that they make you safer in reality. 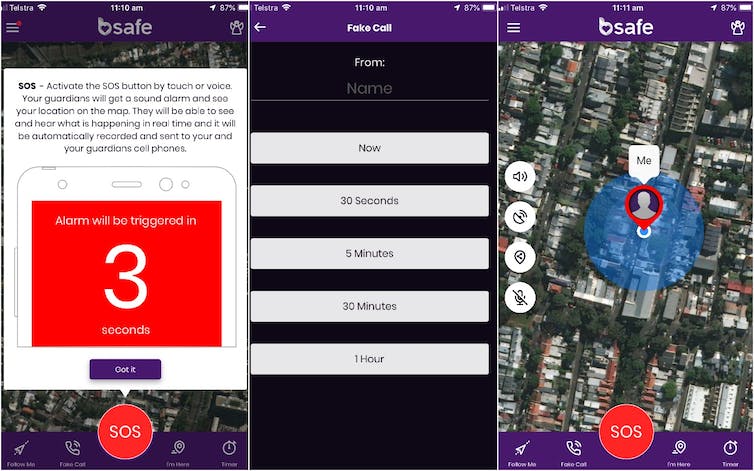 The bSafe app allows your loved ones to pinpoint your location when you activate the SOS button. BSafe

Read more: Safe in the City? Girls tell it like it is

How risky is solo travel for women?

In Australia, one in three women has experienced physical violence since the age of 15, and one in five has experienced sexual violence. Much of this violence takes place in private space. And the overwhelming majority of it is committed by men who are known to the woman victim. Often by an intimate partner, date, family member or acquaintance.

The rates and patterns of violence against women are similar in many countries globally. But there are some places where both violence generally, and violence against women, happen more frequently and where travellers might be at additional risk. For example, a 2013 report of the World Health Organisation found that women in Africa were almost twice as likely as women in Europe to experience violence.

Meanwhile the Australian government recommends avoiding any travel to some countries and regions within Africa, South America and the Middle East. India also features in research into countries which may be comparatively less safe for women travelling alone. 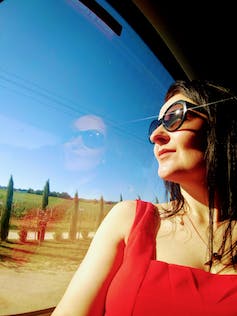 But for many of the most common destinations of Australians travelling overseas, the rates and patterns of violence against women are similar to those at home. Some countries, such as Japan, have notoriously low rates of sexual violence. Although there are also well documented concerns over sexual harassment on the subway, and some claims of substantial under-reporting of sex crimes due to social taboos.

Yet the point remains that statistically speaking, unless you’re travelling to a high conflict zone or your travel is to seek refuge in another country, then as a woman it is not necessarily “riskier” for you to travel solo abroad.

This doesn’t mean that there is no risk, but generally speaking the risks of sexual assault or homicide from an unknown male perpetrator in a public place are low. Many women do experience street harassment, intimidation and fear from men in public, but this happens in Australia as well as abroad.

Read more: Why the ‘Hands Off’ campaign targeting sexual harassment on public transport misses the mark

Women are experienced at different types of “safety work”. Many women take additional precautions to manage both their risk of violence, and their feelings of fear or safety, on a daily basis. From avoiding eye contact with unknown men in the street, to wearing headphones even without music playing, to sitting in the back seat of a taxi, to texting a friend when we are home safe.

While travelling solo, this safety work might also include: providing family or friends with our itinerary before we depart, regularly checking in our location on our social media, sending location updates or any changed plans back to family or friends back home, and following along on our navigation while taking a taxi.

Of course, some of these activities – which are certainly practical – can also be understood as managing fear, rather than necessarily keeping us safer. Some of them are directed only at raising the alarm should we go missing – that is presumably, after some harm has already befallen us.

We engage in a kind of “security theatre” – a term famously used to refer to some counter terrorism measures that actually do little to reduce the risk of a terrorist attack, but make the public less afraid. For women, our security theatre includes practices that make us feel safer and more empowered to enter into public spaces.

Read more: Have you ever wondered how much energy you put in to avoid being assaulted? It may shock you

The right amount of panic

As legal scholar Fiona Vera-Gray rightly points out, it seems impossible to know what “the right amount of panic” is. Women are regularly blamed if they fall victim to men’s violence for not being panicked enough – in other words, for taking too much risk. But if we are too panicked it will restrict our movements and participation in the world in ways that seriously undermine our freedoms.

To travel solo while female seems to require walking a tightrope of challenging gender stereotypes of women as inherently in danger and in need of protection, while also navigating a cascade of advice on how to keep safe.

Ultimately, of course, no mobile app is going to prevent a violent crime by a perpetrator who chooses to enact it. But if the convenience of an all-in-one navigating, translating and incident reporting device both makes solo travel easier – and makes you feel more safe and confident – then go on, get out there!