Australia has never been a stranger to droughts, but climate change is now super-charging them.

Besides taking a toll on human health, droughts also bake the earth. This means the ground holds less water, creating a vicious cycle of dryness.

Our research has investigated ways to improve the health and structure of soil so it can hold more water, even during droughts. It’s vital to help farmers safeguard their soil as we adapt to an increasingly drought-prone climate.

Read more: Australia moves to El Niño alert and the drought is likely to continue

The immediate effect of drought is complete loss of soil water. Low moisture reduces soil health and productivity, and increases the loss of fertile top soil through wind and water erosion.

To describe how we can improve soil health, we first need to explain some technical aspects of soil moisture. 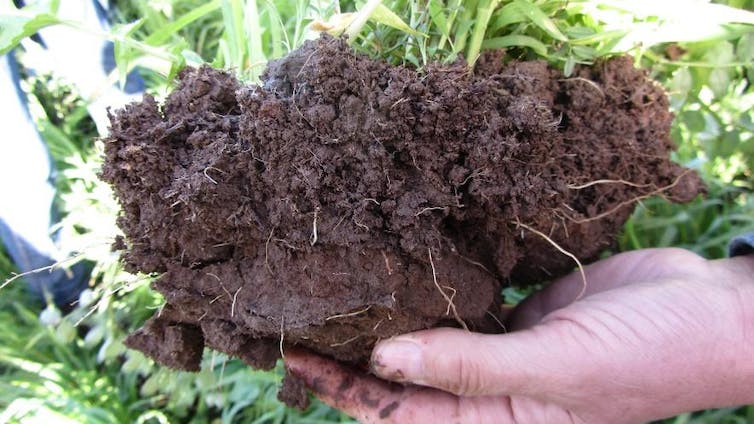 Soil moisture is dictated by three factors: the ability of the soil to absorb water; its capacity to store that water; and the speed at which the water is lost through evaporation and runoff, or used by growing plants.

These three factors are primarily determined by the proportions of sand, silt and clay; together these create the “soil structure”. The right mixture means there are plenty of “pores” – small open spaces in the soil.

Read more: How to fight desertification and drought at home and away

If the balance is skewed, soil can actually repel water, increasing runoff. This is a major concern in Australia, especially in some areas of Western Australia and South Australia.

Good soil structure essentially means it can hold more water for longer (other factors include compaction and surface crust).

Another important part of the puzzle is the amount of organic matter in the soil –it breaks down into carbon and nutrients, which is essential for absorbing and storing water.

There are three basic ways to increase the amount of organic matter a given area:

Typically, biosolids are used to give nutrients to the soil, but we researched its impact on carbon storage as well. When we visited a young farmer in Orange, NSW, he showed us two sites: one with biosolids, and one without. The site with biosolids grew a bumper crop of maize the farmer could use as fodder for his cattle; the field without it was stunted.

The farmer told us the extra carbon had captured more moisture, which meant strong seedling growth and a useful crop.

This illustrates the value of biowastes including compost, manure, crop residues and biosolids in capturing and retaining moisture for crop growth, reducing the impact of drought on soil health and productivity.

Improving soil health cannot happen overnight, and it’s difficult to achieve while in midst of a drought. But how farmers manage their soil in the good times can help prepare them for managing the impacts of the next drought when it invariably comes.

The author would like to thank Dr Michael Crawford, CEO of Soil CRC, for his substantial contribution to this article.