Thousands of Australians travel to Thailand each year to lie on a beach at Phuket, meditate at a Buddhist temple in Ayutthaya, spot wild elephants at Khao Yai National Park, or go on some other adventure.

But how many realise that beneath their feet, the framework of the country once formed part of the same continent as Australia?

Our new research, published in Lithos, uncovered the deep links between Australia and Thailand, rebuilding the geography of this part of the ancient supersized continent Gondwana.

Read more: A map that fills a 500-million year gap in Earth's history

This was a time before the dinosaurs, when the first forests turned the land green and giant dragonflies tracked airways through the vegetation.

Our work suggests that some fictional time-travelling Phuket beach-lover could have walked to the Pilbara in Western Australia. A pre-Jurassic culture vulture in Ayutthaya could have trekked over an ancient Indonesian-like volcanic island chain, and some Khao Yai elephant-ancestor could have rampaged through the site of the Perth CBD.

Tracking these bits of continents and their dance across the globe is part of a large effort to map our planet through its history. Last year we published a map of half a billion years of Earth history.

This was one of the first forays into mapping Earth in deep time. But putting the details on these maps is far from straightforward.

To do this, scientists first try to find geological hints in the rocks of two regions to suggest they are related to each other and have similar histories.

The problem with much of Southeast Asia is that the rocks on the surface are too young – they left Gondwana between 400 million and 300 million years ago, and the rocks we need to see are now buried.

Our research gets around this by using some of these young rocks – granites that formed the roots of old volcanoes – as upside-down probes to fingerprint the deeper Earth.

The idea is that the granite magma mixed a little with the older rocks below as it worked its way up in the crust, forming a unique molten rock soup with subtle chemical differences that can help map the geological basement.

Our study in Thailand used granites, between 500 million and 80 million years old, to discover these characteristics of the older underlying basement rocks. These granites contained chemical markers from the magma that can date when it formed and separated from the mantle. In some cases, these date back nearly 3 billion years.

The three blocks of Thailand

Thailand may be one country now, but it is made up of three distinct geological regions: Sibumasu, Sukhothai, and Indochina. 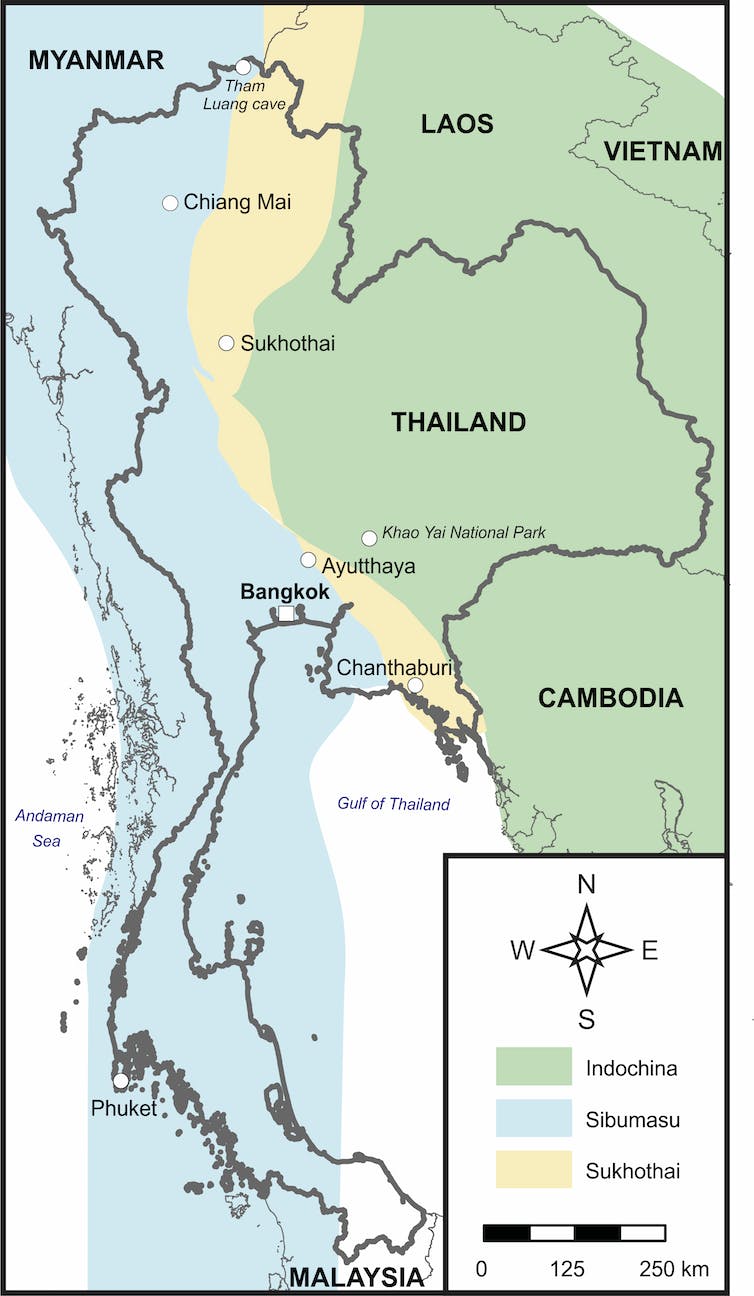 These three blocks all originated in different parts of Gondwana and collided about 200 million years ago. That is a long time ago, but geologically not so old when you consider that the planet is 4,650 million years old.

Sibumasu makes up most of the Thai peninsula and follows north into northwestern Thailand past Tham Luang cave – where the young soccer team and coach were rescued earlier this year – and into Myanmar.

Sukhothai is a volcanic arc system like modern Indonesia or Japan. It cuts through the middle of Thailand past the historic city of Sukhothai, extending southeast to the ruby and sapphire market town of Chanthaburi.

Indochina includes everything in Thailand east of the Sukhothai block, and extends into Cambodia and Vietnam.

Read more: What's Australia made of? Geologically, it depends on the state you're in

But the granites from Indochina tell a different, shorter story. The chemical fingerprints from this block show that it formed from melting of the deep Earth much more recently than Sibumasu.

This eastern region formed only between 1.28 billion and 500 million years ago – still very old, granted, but not nearly as old as the Thai Peninsula and Sibumasu. Similar compositions of rocks occurred smeared along the west coast of Australia, and especially in the Margaret River wine region of Western Australia.

The Sukhothai block is chemically somewhere between Sibumasu and Indochina, with separation from the deep earth mantle modelled between 1.74 billion and 850 million years ago.

These intermediate values from the Sukhothai granites are probably a result of mixing of the more youthful Indochina with ancient recycled Sibumasu when the blocks collided and one was pushed over the other.

Australia is currently moving north by up to seven centimetres per year. As we creep towards Asia, like it or lump it, Australia’s future really is with Asia.

So Australians, just hang on, enjoy the ride, in a few tens of million years the southern Thai beaches will be a short drive away. 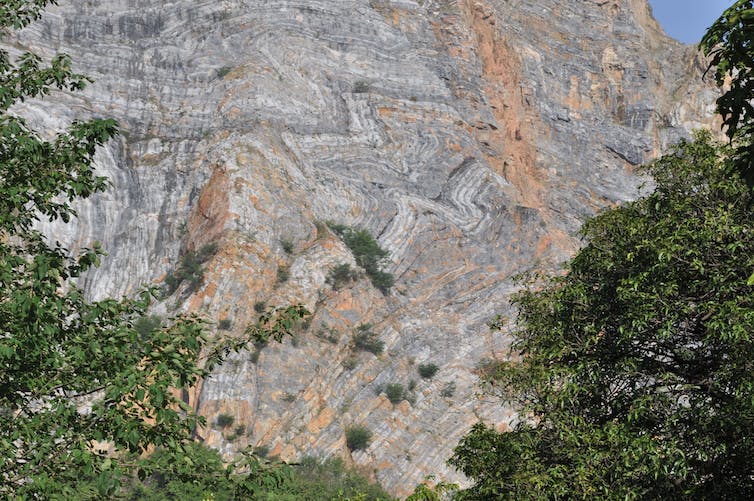