The dingo is Australia’s largest land-based predator, occurring across most of the mainland and on many nearshore islands.

Our new research, published in the journal Mammal Review, reveals the breadth and diversity of dingo diets across the continent.

We compiled and analysed 73 sets of data, containing details of more than 32,000 dingo droppings or stomach contents, to document the range of different species that dingoes eat, and how their diets vary between different environments.

The true number of species is likely to be much higher because dingo diets have been poorly studied in many parts of Australia, such as Cape York Peninsula.

Read more: Dingoes do bark: why most dingo facts you think you know are wrong 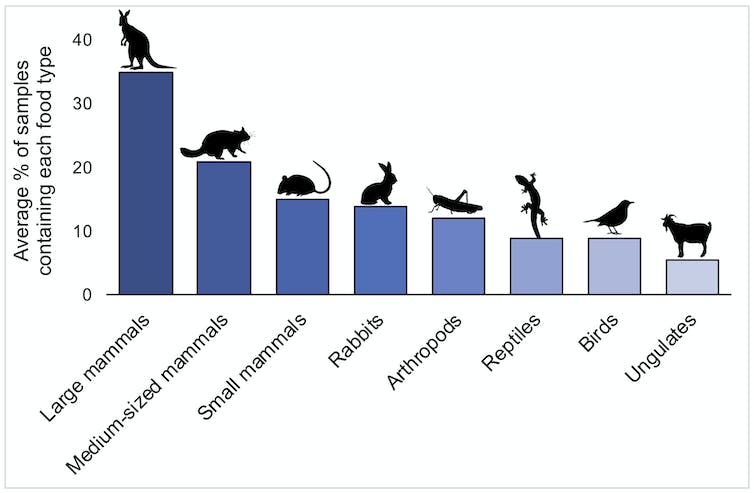 Average occurrence of eight food types in the diet of dingoes. Values represent the percentage of droppings/stomachs that contained each food type.

A range of introduced pest species also feature in dingo diets, including deer, goats, rabbits, hares, black rats, house mice, foxes and cats. In recent decades, the occurrence of sambar deer in dingo diets has increased as this invasive species has expanded its range.

Dingoes also eat sheep and cattle, although dietary samples are unable to distinguish between predation and scavenging, and hence tell us little about dingo impacts on livestock production. Dietary samples also do not reveal instances of dingoes killing livestock without eating them.

We found that what dingoes eat depends on where they live. For instance, in arid central Australia, birds, reptiles, rabbits, small mammals and insects form major parts of dingo diets. In contrast, these food groups are less important in temperate and subtropical eastern Australia, where medium-sized and large mammals such as kangaroos, bandicoots and possums are more important. 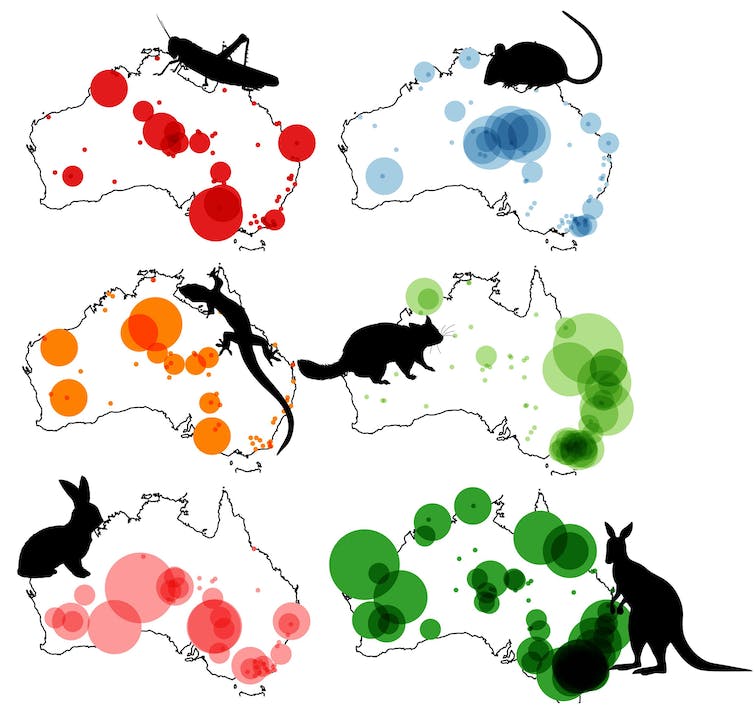 Nonetheless, one medium-sized mammal was a major food item for dingoes in arid areas: the European rabbit. In some areas, more than 50% of dingo droppings or stomachs contained the remains of this invasive species. It is possible that native medium-sized mammals previously constituted a major part of dingo diets in arid Australia, but have since been replaced by rabbits.

Local prey availability plays a major role in determining what dingoes eat. For instance, in the Tanami Desert, reptiles were most common in dingo diets during warmer months when they are most active. However, very few studies have collected data on prey availability, partly because of the sheer number of different animals that dingoes eat.

Dingoes kill or eat at least 39 native species that are classed as threatened or near-threatened on the IUCN Red List. These include the northern quoll, golden bandicoot and bridled nailtail wallaby.

This tally is higher than the number of threatened species in feral cat diets (based on a previous study that used similar methods), even though cats eat almost twice as many different species overall as dingoes (400 and 229, respectively).

Read more: Why the WA government is wrong to play identity politics with dingoes

Today’s threatened native species co-existed with dingoes for a long time before European colonisation, which means they were able to withstand dingo predation without going extinct.

Dietary studies are one way we can understand how dingoes interact with other species. Our study also highlights that we still have much to learn about our native top predator. In many parts of Australia, the favourite foods of dingoes are still a mystery.