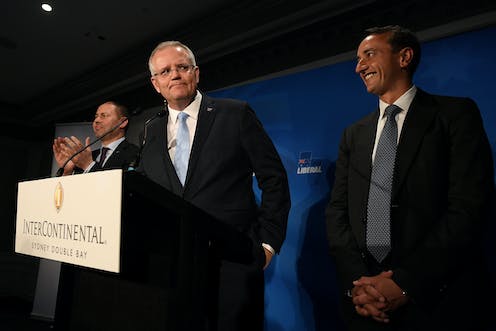 Another 1,266 postals are awaiting processing, and probably another 4,000 will arrive by the deadline for postal votes reception on November 2. If Sharma’s dominance with postals continues, he could win Wentworth after it was called for Phelps early on election night. In byelections, there are very few votes other than postals to be counted after election day; in general elections, Liberals usually perform badly on absent votes.

Analyst Kevin Bonham has identified two discrepancies in election-day booths where Phelps performed much worse on preferences than expected, given primary votes at those booths. If these booths are corrected in Phelps’ favour, she will gain enough votes to offset the postals, but there may be other errors that assist Sharma. Election-night figures will be carefully rechecked over the next few days.

If corrections to the election-night count favour Phelps, she is very likely to win. If there is no substantial correction or corrections cancel out, Sharma is about a 60% chance to win, given his dominance on postals, of which there are probably about 5,000 left to count.

Wentworth has existed since Federation, and had always been held by the Liberals or their conservative predecessors. The loss of Wentworth would deprive the Coalition of its parliamentary majority, and is thus more important than the average byelection, where the government’s majority is not threatened, allowing voters to lodge a protest vote without risking the government.

The Poll Bludger has details of the five Wentworth ReachTEL polls, taken from August 27, three days after the change of PM, to October 15. These polls were conducted for various left-wing groups. In the August 27 poll, Sharma had 34.6% of the primary vote, but recovered to 43.0% on September 27, before slumping back to 33.4% on October 15.

Media expectations were that if Phelps made the final two, she could defeat Sharma. If Murray made the final two, Sharma would win. As a result, people who wanted Sharma defeated switched to Phelps. The electoral commission will do a two-party count between Sharma and Murray, but probably not for at least two weeks. Sharma will win this count, vindicating the switch to Phelps.

Turnbull’s personal vote was probably worth about ten points to the Liberals in Wentworth. After a large fall following Turnbull’s exit, the Liberals’ primary vote was improving in ReachTEL polls of Wentworth before the events of the last two weeks appeared to push it down again.

On my personal website, I said that the Coalition under Scott Morrison could have problems among better-educated voters, and that Morrison’s social conservatism would not appeal to an electorate that voted Yes to same-sex marriage by an 81-19 margin, the fourth highest vote for SSM in a federal seat.

I wrote for The Poll Bludger on Friday about the November 6 US midterm elections. Democrats are likely to win the House, but Republicans are likely to retain the Senate. Trump’s ratings have improved.