The 1800s was a time of colonial expansion across the globe. During this time the great and the good of Britain filled their grand gardens with exotic novelties from all corners of the world.

Amongst these were many species of Asian rhododendron, a diverse and colourful genus of shrubs and small trees, whose high altitude origins made them well suited to the cool temperate climate of England and Scotland.

Read more: The road to here: rivers were the highways of Australia's colonial history

Throughout the 19th century, commercial collectors and field naturalists discovered rhododendron species in southern China, the Himalayas, on the high peaks of Borneo, Java and especially New Guinea.

These finds lead Victoria’s government botanist of the time, Ferdinand von Mueller, to speculate about finding rhododendrons on the high tropical mountains on the northeast coast of Queensland. He wrote:

When in 1855 [I] saw… the bold outlines of Mount Bellenden-Ker, the highest mount of tropical Australia, towering to 5,000 feet, [I] was led to think, that the upper region might prove to be the home of species of Rhododendron… forms of plants characteristic of cool Malayan sylvan regions.

But the lofty heights of Mt Bellenden Ker were unknown to European Australians. It would be another 32 years before an expedition led by naturalist W.A. Sayer reached its central peak. 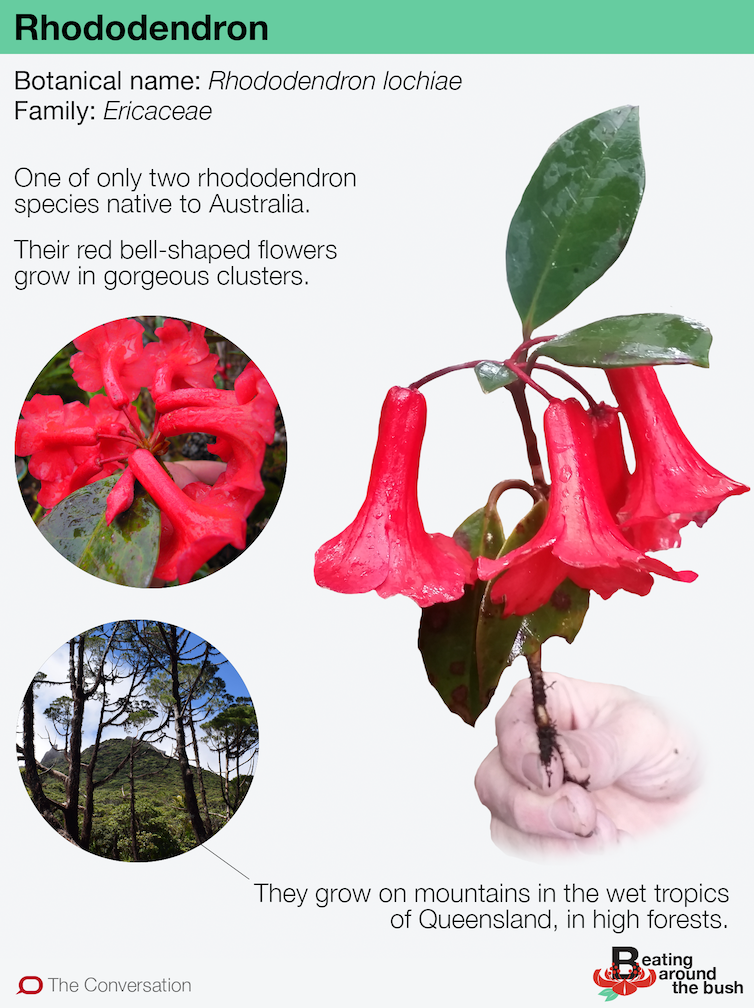 The Conversation, CC BY-ND Sayer’s expedition, accompanied by two indigenous assistants, reached the mountain’s high ridge after several mishap-filled attempts. It was here they confirmed Mueller’s suspicions. Sayer’s account of its discovery is interesting: The top of the range is razor-backed, and on travelling along the range beyond the spur by which we ascended, I could not see the sides, they being, if anything, hanging over. We tumbled rocks over, but could not hear them fall. It was here that I observed the Rhodendron Lochae growing, and asked the Kanaka to get it; but he remarked, ‘S'pose I fall, I no see daylight any more; I go bung altogether;’ so I had to get it myself. Mueller received the hard-won specimens and named the species Rhododendron lochae (later corrected to R. lochiae) after Lady Loch, the wife of the Victorian Governor. Since then, rhododendron plants have been found on nine peaks and tablelands in the Wet Tropics region of north Queensland. Populations on peaks south of Cairns are called Rhododendron lochiae, whilst plants growing on mountains to the north of Cairns are considered by some to be a distinct species: Rhododendron viriosum. 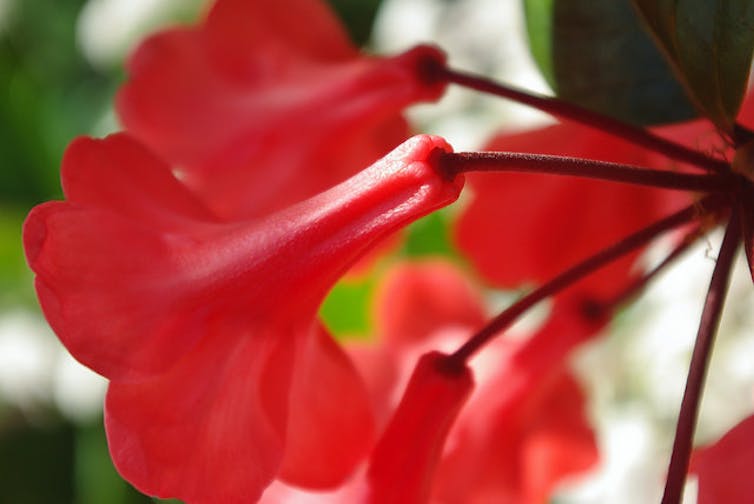 Australian rhododendron at Smith College Botanical Garden. Ren Glover/Flickr, CC BY-NC Both northern and southern plants are straggly shrubs that grow in thin soils or rock cracks, sometimes in open cloud-swept boulder fields, sometimes in deep shade along creeks, or rarely as epiphytes on moss-covered trees. They produce bunches of gloriously red, bell-shaped flowers, followed by dry brown capsules filled with small winged seeds that are apparently spread by wind. They grow slowly but with relative ease from cuttings, and are often cultivated in gardens and nurseries in temperate Australia. However, over time knowledge of the precise origin of these cultivated plants has been lost, which means they are unsuitable for detailed scientific investigations. All of Australia’s rhododendron populations are located at altitudes above 950m in National Parks within the Wet Tropics World Heritage Area. Most are difficult to access, requiring arduous climbs on rough foot tracks through leech-infested rainforest. And yet, although isolated in protected areas, they are threatened by human activities: loss of habitat due to climate change. Recent climate modelling research published by scientists from James Cook University and the CSIRO predicts significant reductions in suitable habitat for a suite of mountaintop flora species in Australia’s tropics (our rhododendrons were not included in the analysis, but occupy the habitats assessed). The habitat of many of these species is predicted to disappear altogether well before the end of the century. 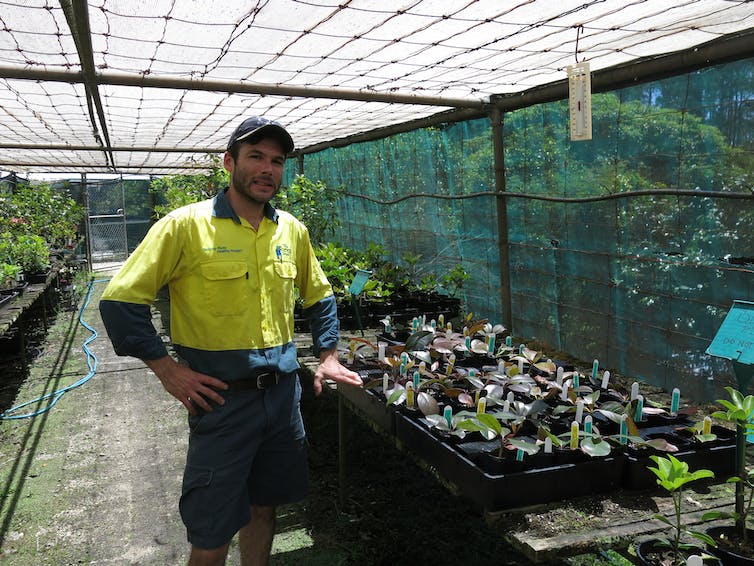 Conservationists are racing to preserve samples of native rhododendrons. Author provided Using rhododendron as a model, the Australian Tropical Herbarium at James Cook University is working to save these threatened species through “ex situ” conservation – cultivation in temperate zone public gardens, well outside their natural range. Because the threatening process – climate change – is not readily mitigated, establishing precautionary ex situ collections is the only viable conservation intervention for these plants. With funding from the Australian Rhododendron Society Victoria Branch and the Ian Potter Foundation, and the support of traditional owners, Queensland National Parks and the Wet Tropics Management Authority, we have mounted expeditions to collect samples from most of the known populations. These expeditions have put expert naturalists into rarely visited and challenging environments. Beyond gathering rhododendron samples, new moss species have been discovered and are being named, a fern previously thought extinct was rediscovered, and beautiful little epiphytic orchids have been found on a mountain where they’d not previously been recorded. Golden bower-bird bowers have been mapped in remote mountain rainforests, and a likely new species of snail has been discovered. Read more: The best time to water your plants during a heatwave Australia now has a well-documented and genetically diverse collection of native rhododendron plants thriving in the Dandenong Ranges Botanic Garden. We plan to expand this work, ensuring the preservation and public display of rhododendron and many other mountain species threatened by climate change.