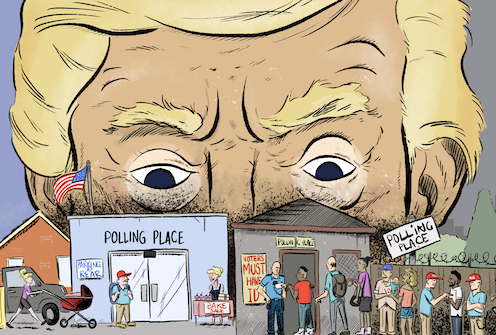 From afar, the US midterm elections might seem to be all about Donald Trump, and there is some truth to this. The man, as has been the case for some years now, is unavoidable.

More than 700 days after the host of The Apprentice was elected to lead the world’s largest military and economic power, this...

From afar, the US midterm elections might seem to be all about Donald Trump, and there is some truth to this. The man, as has been the case for some years now, is unavoidable.

More than 700 days after the host of The Apprentice was elected to lead the world’s largest military and economic power, this will be the first chance for Americans to express buyer’s remorse at the ballot box by potentially giving the Democrats control of the House (and less likely the Senate) in order to rein in the president.

Trump himself is not up for re-election, though. Voters will be making decisions about local and state representatives, so it would be a mistake to presume the outcome will be entirely dependent on questions of federal leadership.

However, Democrat Tip O’Neill’s famous claim that “all politics is local” is not entirely true here; this election has local, national and international implications.

This is why, once again, non-Americans are taking such an interest in an American election. Many believe that Trump and his Republican Party represent much of what endangers the world.

Who is up for election?

Members of the US House of Representatives serve two-year terms, and senators six-year terms. This means that all 435 members of the House and 35 out of 100 senators (33 plus two empty seats due to resignations) are up for re-election on November 6.

Due to the Democrats’ success in the 2012 election, just nine of those 35 Senate seats are Republican-controlled. So the Democrats’ chance of taking the Senate is slim – around 1-in-7, according to FiveThirtyEight.com – despite the fact Republicans currently hold only a narrow 51-49 majority. 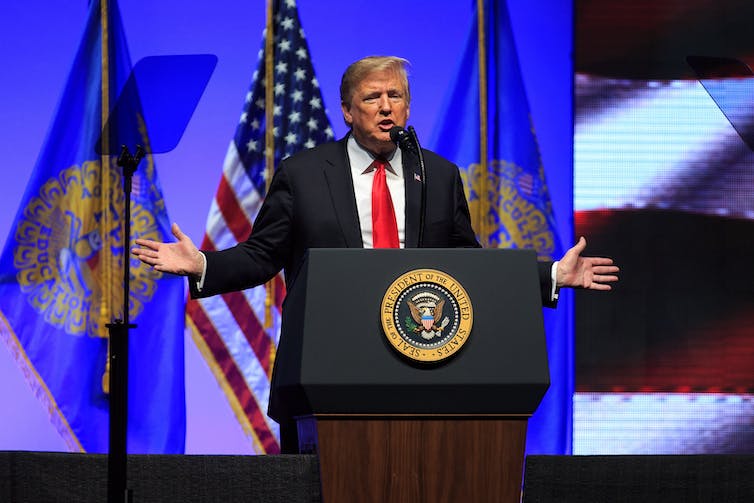 Even with Trump’s outrages, the Democrats’ chances of taking control of the Senate are slim. Justin Casterline/EAP

For those outside the US, this may seem remarkable, given the profoundly unethical decisions enacted by the Trump administration, and the parade of misogyny that surrounded Judge Brett Kavanaugh’s recent Senate confirmation hearing for the Supreme Court.

And yet, there are a number of plausible scenarios in which the minority party could actually lose ground.

To forge a path to victory in the Senate, Democrats will need to retain seats in states that Trump won easily in 2016 – North Dakota, Montana and Missouri – as well as in Florida, where incumbent Democrat Bill Nelson faces a tough race against multimillionaire Republican Governor Rick Scott.

They’ll also need to pick up a seat or two in the traditionally Republican states of Arizona, Texas, Tennessee and Mississippi (listed in order of likelihood). The fact that Mississippi and Tennessee are even in play for the Democrats is noteworthy because Trump won both in 2016 by over 15 percentage points. 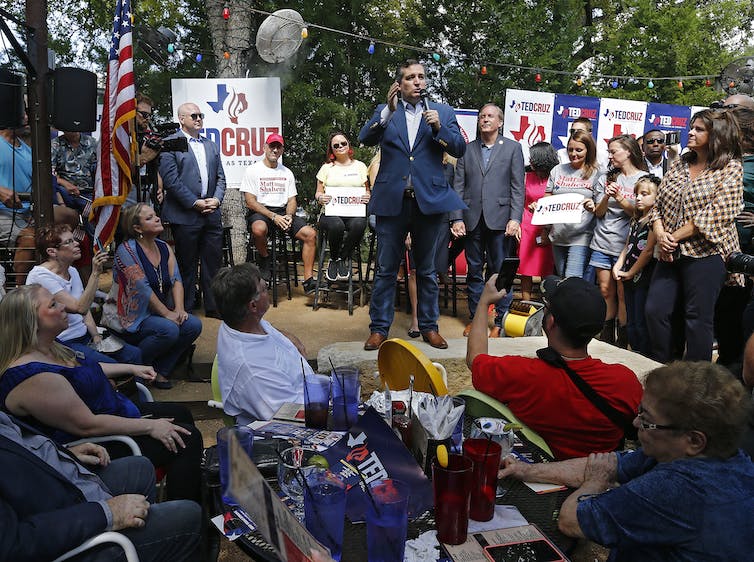 Texas is one of the seats Republicans need to win to retain their hold on the Senate. Larry W. Smith/EAP

But given the circumstances, the Democrats remain unlikely to win a Senate majority.

A Democratic victory in the House is far more probable, with FiveThirtyEight.com giving the minority party a 6-in-7 chance to take back control.

Because all House seats are up for grabs, this is the contest that many will view as a national referendum on the Trump administration. And the results will be shaped by voter turnout.

Typically, turnout for midterm elections is older and whiter than it is for presidential elections, and this is a demographic that favours Republicans. The Republicans have maintained or taken control of the House in every midterm election since 1994, with the exception of 2006, when President George W. Bush’s popularity had plummeted to the mid-30s due to his mishandling of the Iraq war and Hurricane Katrina.

According to recent polling averages, Trump’s approval rating has been hovering at just over 40%.

Why is gerrymandering significant?

This election is consequential for far more than the future of the Trump administration. Republican victories in state legislatures and governors’ races, which occur alongside the national election, will provide another opportunity for the party to consolidate its power through gerrymandering.

Gerrymandering is the underhanded process whereby elected politicians redraw federal and state electorate boundaries to group voters by demographics and improve their chances of success at the ballot box.

These lines are redrawn every 10 years, following a nationwide census. The next census is in 2020, so the lines will next be redrawn in 2021. This year’s midterm election is therefore crucial in determining which party will control each state during the upcoming redistricting process.

Gerrymandering tends to be a tactic of Republicans, who currently hold the majority of seats in 32 of America’s 50 state houses. Furthermore, the task of gerrymandering is more straightforward for Republicans, as Democratic voters are typically packed together in urban centres, while Republicans are usually spread out across states.

In a number of states, Republicans have engineered things so Democrats are sure to win just a few seats with massive majorities, while Republicans are favoured to capture far more by closer margins, for instance a 55% to 45% majority.

However, there is a catch. In a wave election, as this one may well be, those Republicans who would normally expect to get elected with 55% of the vote could be vulnerable. This may occur in this year’s House races in North Carolina.

What is the effect of voter suppression?

Further impeding the Democrats’ chances is the systematic and widespread strategy of voter suppression, which is typically utilised by Republicans to prevent likely Democrat voters, such as African Americans, from voting.

One particularly alarming example has been happening in Georgia, where Democrat Stacey Abrams is attempting to become the country’s first female African American governor. 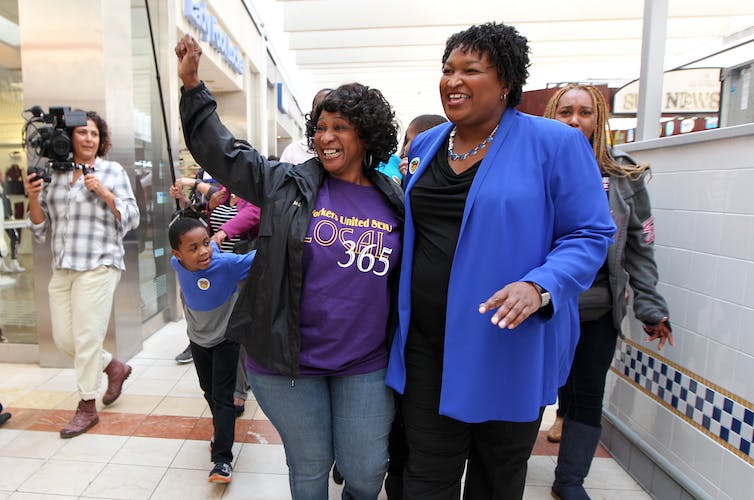 Her Republican opponent, Brian Kemp, also happens to be Georgia’s secretary of state. His office had been strictly enforcing a new law known as “exact match”, under which voter-registration applications are dismissed for absurdly minor discrepancies, such as missing hyphens or slightly mismatched signatures.

Read more: Six types of ugly American, and Donald Trump is all of them

A judge recently halted this practice, but over 53,000 registration applications have already been suspended. African Americans comprise 32% of the state’s population and nearly 70% of the rejected applications.

This kind of behaviour is not confined to a few rogue states. Other methods of voter suppression, such as felon disenfranchisement, voter ID laws and reductions in the number of polling booths in African American communities, are routinely used across the country to disproportionately target minority voters.

Even the fact that voting takes place on a Tuesday, rather than a weekend, marginalises people who cannot get off work. These people are likely to be poorer and less likely to be white.

Will Trump be impeached?

As was proven on the evening of November 8, 2016, while polls can show likelihoods, nothing is guaranteed. However, the polls currently suggest that the most likely outcome of these midterms is a Democratic-controlled House and a Republican-controlled Senate.

What this would mean for Trump is more frustration. The Democrats would be able to investigate the president’s questionable financial deals, potential fraud related to Trump University and possible links to Russian interference in the 2016 election. They could also push for the release of Trump’s much sought-after tax returns.

It seems likely the House will find grounds to impeach Trump. But, hold your breath – that would be only step one of a lengthy process.

Dismissal of a president requires 67 of 100 Senate votes, a threshold that makes such an event unlikely. Given the president’s propensity for mendacity, it will be intriguing to see whether he is able to avoid any perjury charges that might arise from Robert Mueller’s ongoing investigation into Russian election interference. But again, such charges are unlikely to lead to his removal from office.

Yet who can say? Whatever the outcome on November 6, there is much about the future of US politics – and the global ramifications – that remains entirely unpredictable.