This is the second article in our series, Australian Cities in the Asian Century. These articles draw on research, just published in a special issue of Geographical Research, into how Australian cities are being influenced by the rise of China and associated flows of people, ideas and capital between China and Australia.

In the iconic book The Lucky Country, author Donald Horne described Australia as the first suburban nation. Half a century later, the moniker is perhaps truer than ever. We calculate that the five largest metro areas now house 64% of Australia’s population. And the greatest population growth is in peri-urban fringe areas.

Most new housing is built in the suburbs, and detached dwellings are a staple of the “Australian Dream” of home ownership. So it should come as no surprise that Australia’s most rapidly growing ethnic group, migrants born in mainland China, is choosing to settle in the suburbs.

Our research finds that the residential patterns of China-born migrants in Australian capital cities are becoming both more diverse and more suburban.

Read more: How Australian cities are adapting to the Asian Century

Chinese migration to Australia dates back longer than the Commonwealth itself, with the first wave tied to the 19th-century gold rushes.

In the 1980s and 1990s, ethnic Chinese from Hong Kong, Taiwan and the “Nanyang” countries of Southeast Asia (e.g. Singapore, Malaysia) came to Australia along with migrants from mostly southern mainland China.

Since 2000, Chinese migration to Australia has been more geographically diverse in its origins. These migrants have also been increasingly advantaged in socio-economic status and often driven by tertiary education.

Read more: What we know about why Chinese students come to Australia to study

Australia is now home to more than 1.2 million people of Chinese ancestry, 41% of them born in mainland China.

Just like most Australians, these China-born migrants are concentrated in major cities. The Chinatowns in cities like Sydney and Melbourne remain as important cultural icons. Yet the reality is that, just like cities such as New York, Toronto and Vancouver, there has been an obvious trend of China-born migrants dispersing to live in the suburbs.

In our study covering the three census periods from 2001 to 2011, China-born residential patterns became more diverse over time. There has been greater dispersal in the large cities (Sydney, Melbourne and Brisbane) and clustering in medium and smaller cities (Adelaide, Perth, Hobart, Darwin and Canberra).

In other words, as the local population of China-born migrants gets larger and more complex, multiple Chinese enclaves emerge. These include Hurstville and Campsie in Sydney, Burwood and Clayton in Melbourne, and Sunnybank and Sunnybank Hills in Brisbane. 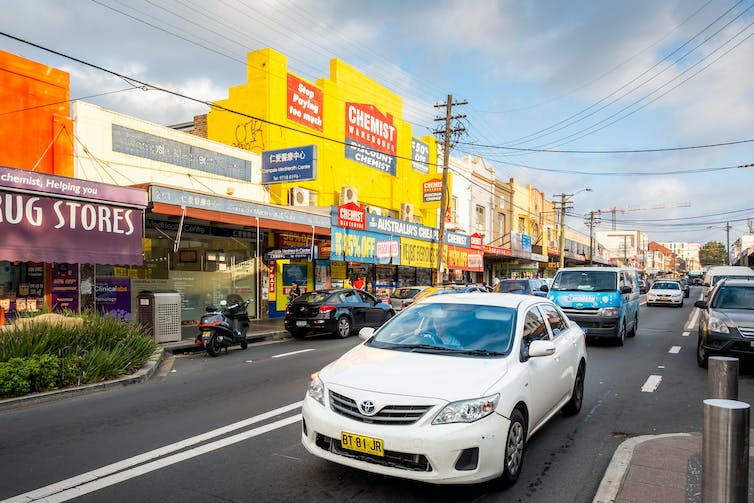 Campsie is one of the Sydney suburbs popular with China-born migrants. Victor Wong/Shutterstock

In the smaller capital cities of Adelaide, Hobart, Darwin and Canberra, residential clusters appear to emerge near major universities in inner cities. Here, housing markets and planning initiatives play a strong role as well. Clustering appears mostly in and around inner cities, which may be tied to the construction of high-rise unit blocks.

Interestingly, the diversity of this suburbanisation － particularly in Melbourne and Sydney － runs counter to the narrative of the “straight line” assimilation model. This is based on the idea that migrants and their children simply amalgamate into the population at large. Unlike what such “traditional” models predict, the integration of China-born migrants has been accompanied by concentration growing stronger over time, mainly in the outer suburbs, regardless of their socioeconomic status.

The association among residential improvement, individual advantages and entry into mixed White neighbourhoods may be weakening. This is reflected in the growing tendency towards living in Chinese-dominated communities with the benefits of easy access to Chinese-owned business and services. Formation of ethnic concentrations is voluntary, which runs counter to the idea that a lack of options forces migrants to segregate.

A new look for suburbia

With about half of Australians born overseas or having an overseas-born parent, migration has rendered Australia one of the world’s most diverse countries. While television shows such as Neighbours and Home and Away still depict suburbia as the preserve of the moneyed Anglo-Australians, the composition of today’s suburbs mirrors the diversity of the nation. Just remember that next time you are trying to find a good acupuncturist!

Read more: The rise of the super-diverse 'ethnoburbs'