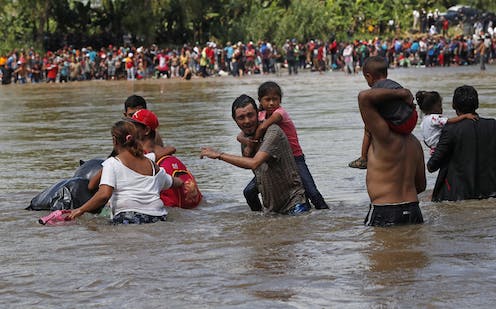 Honduras is a wonderful place for a short visit, despite its reputation as a one of the most dangerous places on the planet. It is a small, beautiful country with an abundance of natural resources and a warm, welcoming culture. But it is a very hard place to live.

I first travelled there nearly 20 years ago to do volunteer work, meeting my Honduran husband in the process. I have visited multiple times since then, including living in Honduras for nearly a year while doing my PhD research. In September this year we visited for a month, spending time with family and friends, with discussions often revolving around politics, violence, and the difficulty of life in Honduras.

When news emerged two weeks after we left of a caravan of migrants making their way across Guatemala and Mexico to the United States, I wasn’t surprised. Here are five reflections on the origins and implications of the caravan.

Corruption as the operating system

The place migrants are leaving is more important and relevant than the place they are going to. Political corruption and repression, gangs, drug cartels, land pressures and climate change make life very difficult for most Hondurans, and impossible for some. Every Honduran has a story of violence.

Business owners sleep on the premises with a gun for protection, and drivers carry extra cash to pay corrupt police if pulled over. People avoid the centre of large cities wherever possible.

For those who have crossed paths with the gangs or drug cartels, dared to protest against the government, or tried to stand up for community rights in the face of mining corporations and dam builders, it is unimaginably difficult.

In 2017, the Carnegie Endowment for International Peace noted that in Honduras, “corruption is the operating system”, with “repression … carefully targeted for maximum psychological effect.”

When conditions are this bad, large-scale migration is inevitable, and many of these migrants are, in effect, refugees.

US complicit in crisis

Rather than being the victim of a migrant invasion, the United States is complicit. While local elites and politicians carry much of the blame for the chaos, decades of US meddling in the region has played a significant role.

Read more: How US policy in Honduras set the stage for today's migration

Poverty and inequality in Honduras has roots in the activities of American fruit companies throughout the 19th and 20th centuries. The current instability can be traced to the 2009 coup, the success of which was partly attributable to US policy.

Since that election, there has been another major increase in political violence and repression. Through close ties with the Honduran business elites, US and transnational corporate interests are also linked to the repression of environmentalists and indigenous leaders.

Although the caravan seems huge to us, this is just a drop in the bucket. More than 300,000 individuals were apprehended crossing the border illegally from Mexico into the USA in 2017. This was an historic low, down from 1.6 million in 2000.

It is as also just a tiny fraction of the number of undocumented migrants, refugees and asylum seekers worldwide.

However, this caravan is part of a trend towards migrants and refugees travelling in larger groups. The journey through Mexico is dangerous. For example, rape is very common.

Amnesty International estimates that 60% of women and girls who attempt the journey individually or in small groups are raped en route, and girls as young as 12 take measures to avoid pregnancy.

Individual stories often get lost in the numbers and rhetoric. Focusing on the numbers lends credence to the rhetoric of invasion. It is important to remember that each member of the caravan is a person, with a story, a family, and dreams for the future.

The caravan includes many young men, but rather than being criminals to be feared, many are escaping the gangs, planning to work hard to send money home to families in Honduras. Indeed, the remittances that will be sent by migrants and refugees is potentially of far greater value to Honduran development than any official aid, reducing poverty and increasing household spending across Honduras.

The key to reducing future migration may well be development stimulated by the money these migrants will send home.

A call for compassion

Finally, this caravan might seem far away and irrelevant to people in New Zealand and Australia. As my Honduran husband can attest, the number of Central Americans who make it here is tiny. However, we should take notice, because the global climate that has both led to the emergence of migrant caravans and the racist, anti-immigration rhetoric of US President Trump and others affects us too.

The rhetoric of Australian politicians and their refusal to show any compassion towards those who attempt to reach their shores should sound a warning. Generalising and stereotyping migrants and refugees is a dangerous step towards an even more insecure world, where those who already have the good life are protected, and those who don’t are stuck in a no-man’s land of poverty, violence and insecurity.

Compassion and recognition of the humanity of refugees and migrants is an important step towards building a more secure future and a peaceful world.