I have often heard OzAsia Festival Artistic Director Joseph Mitchell suggest that he looks forward to the day when contemporary work from Asia is so woven into the country’s performing arts landscape that a specialised festival such as this one will be unnecessary.

The fact that Secret Love in Peach Blossom Land has finally received its Australian premiere – over 30 years after it was first staged – suggests that this day has not yet come. The play is directed by Stan Lai, one of Asia’s most esteemed theatre directors, and created by him and Taipei’s Performance Workshop.

The backdrop informing the play’s creation was the historical moment when travel restrictions were lifted and Taiwanese citizens, many of them having fled China in the 1940s and 1950s, could return to China for the first time. As Lai observed in a post-show Q-and-A, many of his parents’ generation went through life unable to be with the people they loved – those they left behind.

This play is in fact two plays woven together, one being a tragic love story. This is the “Secret Love” of the title, dramatized onstage with great emotional clarity and depth by Fan Kuang-yao and Chu Jr-ying. They play the two lovers, Jiang Bin Liu and Yun Zhi Fan respectively, who fall in love in Shanghai during the Japanese occupation and separate just after the second world war. 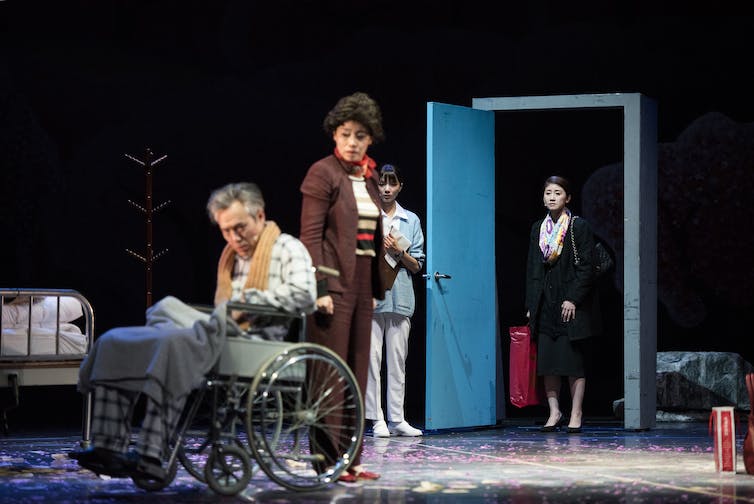 The backdrop to the play is the lifting of travel restrictions between Taiwan and China. OzAsia Festival

Later in the play, with the ailing Jiang on his deathbed in the Taipei hospital, we learn that he has placed an ad in the local newspaper seeking Yun, the pigtailed girl he left behind, on the chance that she, like himself and so many of their generation, ended up in Taiwan. While such a melodramatic plot, to say nothing of the passage of time might seem to make the play irrelevant, it oddly continues to resonate.

Lai estimates that the play has received over 5,000 productions in China, the majority on university campuses. This speaks to its continued relevance to young Chinese people on the other side of the Formosa Strait. And it is when “Secret Love” intersects with the second play, “Peach Blossom Land,” that we begin to understand why this play has endured in the repertory.

To Chinese people, observes Lai, “Peach Blossom Land” is Shangri-La, the mythical land of eternal bliss and peace, described in a well-known fifth century Chinese poem that has been variously adapted. Thus, the play’s title combines two stories that don’t belong together — clearly, there is no room for a secret love in a perfect world! 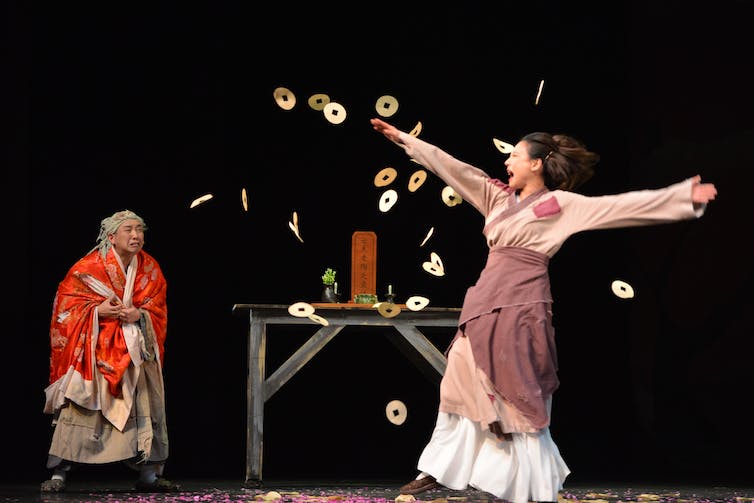 OzAsia Festival But cleverly, the collision between the two plays is not just in differences of tone, content, and style. It also extends from the “real” onstage conflict between actors and the production teams of the two plays as they find themselves booked to rehearse at the same time on the same stage. In addition, the intrusion of the “Peach Blossom” company into the world of the “Secret Love” company also creates an opening for a contemporary clash between two distinct theatre cultures. The “Peach Blossom” players burst onto the stage early in the play, interrupting the serious, heartfelt drama of Jiang and Yun saying their goodbyes in a devastated, post-war Shanghai. Unlike the high-brow dramatic company, led by a difficult director who is clearly too personally invested in the play’s content, the actors in “Peach Blossom Land” are pop-culture denizens, casual, daggy in appearance. Their acting style is broad, farcical, and underpinned by physical and situational humour. 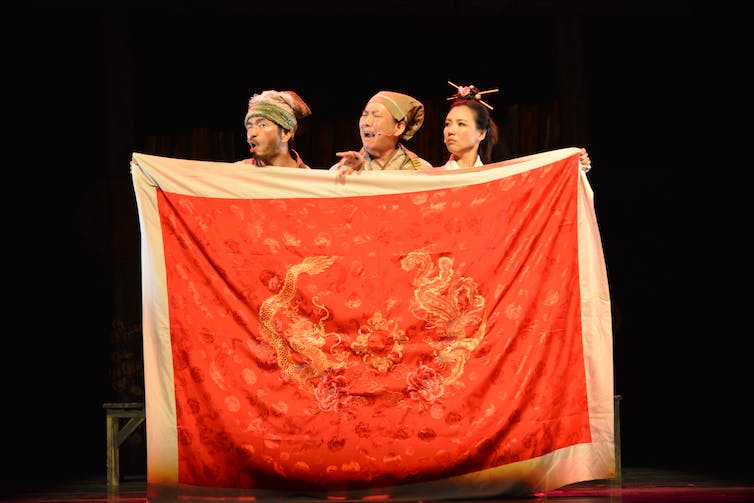 OzAsia Festival As the two plays alternate and the companies increasingly intrude into one another’s dramatic spaces, they begin to overlap emotionally as well. Ultimately, we see that the mythical Peach Blossom Land is not so much a happy place as a boring one, and that the price of happiness for those living in it is not knowing anything of the past. The delightful antics of Tang Tsung-sheng, who plays the humble fisherman Lao Tao, guide us to this world and back again, while the conventions of this style of theatre, with its silly two-dimensional scenery and bits of comic business are sent up even as we see actors mastering the form. Improbably, after shedding a tear when Jiang is reunited with Yun on his deathbed and the two plays and two casts collide across “real” and dramatic time one final time, we experience what Lai suggests is “the human experience of laughing and crying,” the feeling the company had, when initially creating this work, that “it should be different sides of the same coin.” That Shangri-La is only possible without memory suggests that memory, even a traumatic one, is what makes us human. Secret Love in Peach Blossom Land was staged as part of the OzAsia Fesival.