The potential discovery of a planet orbiting Barnard’s Star – the second closest stellar system to the Sun – was announced by researchers today in Nature.

This discovery pushes the bounds of what we can do with our best current astronomical instrumentation, so the authors are understandably cautious in claiming a “planet candidate”, rather than a confirmed discovery.

The new exoplanet (if it exists) is an icy world just over three times the mass of Earth, and has only been uncovered as a result of an exhaustive search by teams across the globe.

So what does this find mean, and why is it important?

Shining 16 times too faintly to see with the unaided eye, Barnard’s Star is an ancient red dwarf – significantly older than the Sun. Aside from the Alpha Centauri system, it is the closest star to the Solar system.

Barnard’s Star’s biggest claim to fame is the rate at which it is tearing across the night sky. It moves so rapidly against the background stars that it would cross the diameter of the full Moon in a little over 100 years.

In the middle of the last century, astronomer Peter van de Kamp was convinced Barnard’s star was accompanied by two Jupiter-mass planets. Over several decades, starting in the late 1930s, he studied the star, taking myriad images, and observing it moving against the background stars.

Rather than moving in a straight line, his observations suggested Barnard’s Star was wobbling as it moved, rocking back and forth as though pulled by unseen companions. His data invoked the presence of two planets tugging the star around as it moved through space.

But despite their best efforts, astronomers elsewhere could find no evidence of van de Kamp’s worlds. Where his observations showed a wobbling star, theirs showed no such wobble – just a linear motion through space.

What was going on? van de Kamp’s observations were made using a large refracting telescope, and astronomers eventually realised that the telescope’s main objective lens had been cleaned and modified several times during the decades of his study. These changes caused the apparent position of the Barnard’s Star to shift back and forth relative to the bluer background stars.

The Jupiter-mass planets around Barnard’s star were no more.

Successive surveys ruled out ever smaller planets. Astronomers are now confident no planet larger than ten Earth masses exists in the system. Which brings us to our new find.

The new candidate planet, Barnard’s Star b, is thought to have a mass between those of Earth and Neptune in the Solar system. While no such planet exists in our backyard, the Kepler spacecraft revealed that such planets are common in the cosmos.

Barnard’s Star b orbits its host at a distance of 60 million kilometres. That might suggest a warm, temperate world – but Barnard’s Star is a dim object, far less luminous than the Sun. As a result, Barnard’s Star b lies beyond what is known as the ice line, so far from the star that water would freeze harder than rock. This means it must be a frigid world. 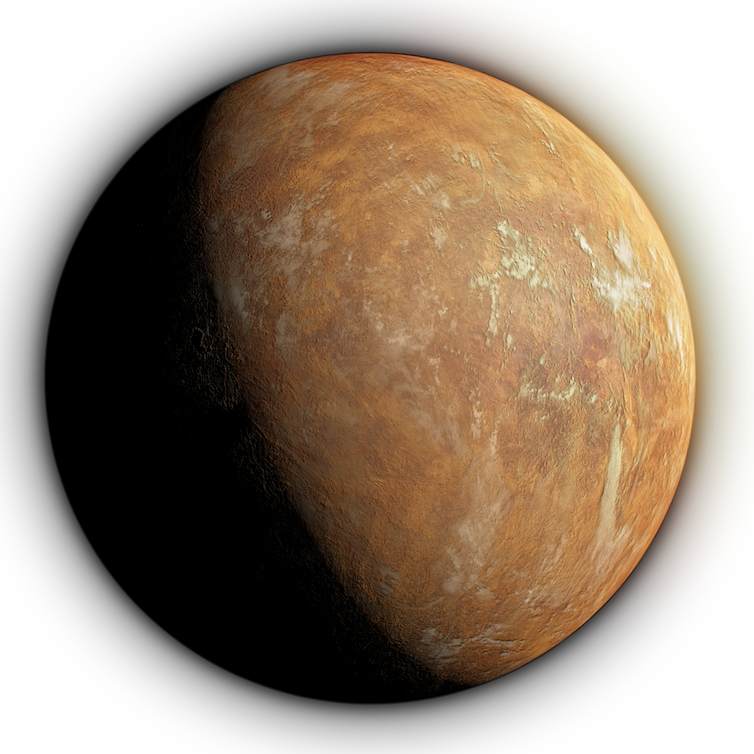 Artist’s impression of Barnard’s Star b under the orange-tinted light from its red dwarf host. IEEC/Science-Wave - Guillem Ramisa

But that icy orbit adds to our confidence that the planet could really be there. Planets form over millions of year in discs of material around young stars. Grains of dust (and ice) collide slowly, growing ever larger worlds. Eventually, the disc of gas and dust is blown away, leaving behind any planets it formed.

This predicts that planets will form most rapidly, and grow fastest, just beyond the ice line, where the presence of water ice will greatly increase the amount of solid material available to the growing world.

In other words, the most massive planet in a given system should form just beyond the ice line. That is true in the Solar system (Jupiter), and also seems true for Barnard’s Star – if the planet really exists.

The future – a timely find

If Barnard’s Star b exists, its discovery could not have come at a more opportune time. As it orbits one of the Solar system’s closest neighbours, it presents a perfect target for future observations.

There are a few ways the planet’s existence could be verified. In the near future, the answer might come from the GAIA spacecraft, which has spent the past few years measuring the precise locations and distances of some two billion stars in the night sky. 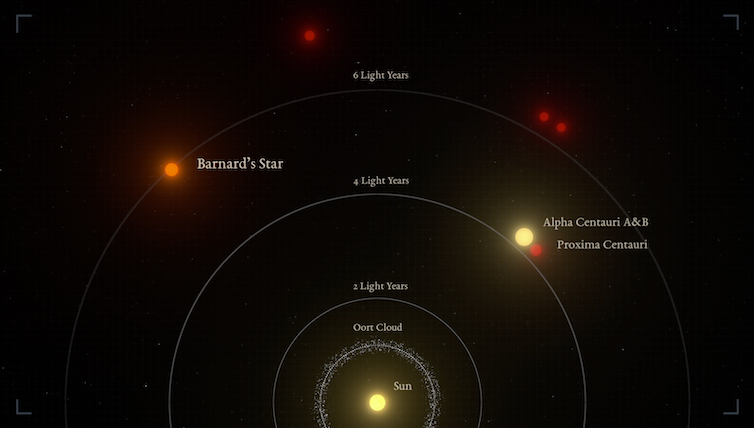 Graphic representation of the relative distances to the nearest stars from the Sun. IEEC/Science-Wave - Guillem Ramisa

Every time GAIA observes Barnard’s Star, it measures its location with a precision far greater than any previous observatory could manage. If there is a planet orbiting the star, three times the mass of Earth, the same technique espoused by van de Kamp should reveal its presence.

In the coming decade, the next generation of astronomical observatory will revolutionise our ability to peer into the space close to the nearest stars, looking for the dim glow of their planets, reflecting the light of their host stars.

Read more: A Goblin could guide us to a mystery planet thought to exist in the Solar system

Because Barnard’s star is so close, the separation between the planet and star in the sky will be relatively large. If the planet is really there, we will likely get our first direct images confirming its existence within the next ten years.

Beyond that? Who knows. One thing we have learned through the exoplanet era is that, where one planet lurks, more are sure to follow. If the existence of Barnard’s Star b is confirmed, it may indicate there are other, smaller worlds orbiting this ancient star.