Premenstrual syndrome is different to premenstrual dysphoric disorder (PMDD), which is rarer (only 3-5% of women of reproductive age experience it) and is listed in the diagnostic manual of mental disorders. People who experience PMDD have severe depression which is often accompanied by suicidal thoughts. Their onset and offset usually coincide with the premenstrual cycle. Unlike PMS, the severely depressed mood of PMDD usually comes on suddenly.

Reproductive hormones – oestrogen, progesterone and testosterone – are also potent brain hormones. They influence the brain chemicals responsible for our thoughts, behaviours and emotions. Their amounts fluctuate throughout the menstrual cycle, so the connection between them and mental health is clear. And we are learning more about why some women may be more affected than others.

There is no single clear theory yet to explain exactly which hormones trigger particular chemicals or why only some women experience PMDD or PMS.

But we know some women are susceptible to mood changes due to small fluctuations in reproductive hormones. In these vulnerable women, small changes in oestrogen and progesterone levels lead to shifts in central brain chemicals (GABA, serotonin and dopamine) that then affects mood and behaviour.

At the same time, many of the physical PMS symptoms such as breast tenderness, bloating, headaches and constipation are a direct effect of reproductive hormones. So both mind and body are affected. 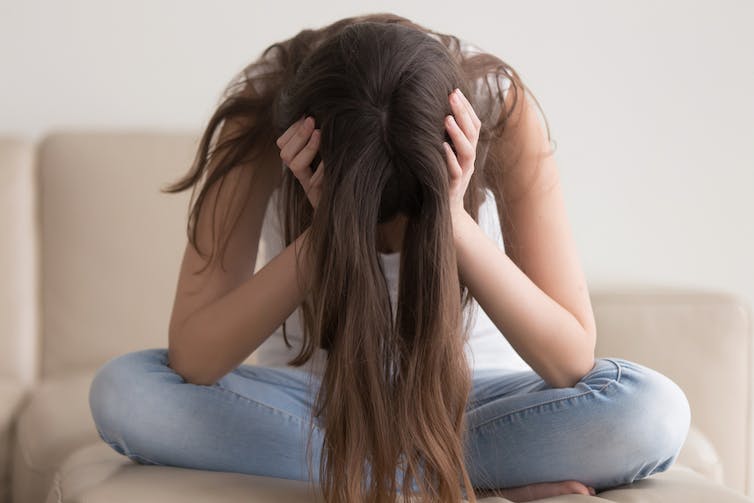 Hormonal changes before menstruation affect both the body and mind. from shutterstock.com

Oestrogen appears to be a “protective” hormone, which can improve psychotic symptoms (such as those common in schizophrenia) as well as depression. Oestrogen directly influences the neurotransmitters serotonin and dopamine to achieve this positive effect.

So depression and other adverse mental symptoms can appear or worsen during phases when oestrogen is low. This happens during the four to seven days before menstruation, and during the transition into menopause.

What about the more severe symptoms?

Recent work suggests PMDD is the result of brain neurochemicals responding in unusual ways to fluctuations in brain oestrogen, progesterone and testosterone, as well as the hormones released by the pituitary gland that determine the levels and fluctuations of these reproductive hormones.

Other studies about the cause of PMDD reveal that a breakdown product of progesterone – called allopregnanolone (ALLO) – is a critical stimulator of a receptor on a part of the GABA transmitter. When stimulated, the GABA system can alleviate anxiety. Benzodiazepine drugs like diazepam (Valium) stimulate the GABA system and help to calm down agitation.

In this way, ALLO works as an “anti-anxiety” hormone. Just like oestrogen, progesterone levels (and its metabolite ALLO levels) fall in the premenstrual phase.

Women who have PMDD are often agitated, anxious and depressed during the premenstrual phase. A newer theory is that their brain chemistry isn’t reacting normally to ALLO, so they become anxious. This is important to explore further and already new drugs that impact ALLO are being developed and tested.

PMDD is complex, like many mental health conditions, and there is an interplay between psychological and social issues as well as hormonal and neurochemical factors. Tertiary education, supportive relationships, fewer socioeconomic struggles and good physical health appear to be helpful, but do not mitigate PMDD completely. Overall, PMDD appears to be biologically driven.

How can we treat it?

Understanding the body-mind connections in both PMS and PMDD is critical for developing effective management strategies for the many women who suffer from significant depression and other issues every month.

Management options need to consider all aspects of the woman’s life including her work, relationships, past traumas, current physical health and daily demands. Many women experiencing PMDD require hormone treatment and other strategies such as antidepressant medication to help them improve their quality of life.

Read more: Biology is partly to blame for high rates of mental illness in women – the rest is social

It’s a good idea for women experiencing PMDD or PMS to keep a diary of their cycles and moods. Women can be reassured their observations connecting hormones and moods are valid. It is important women with PMS/PMDD seek help from health professionals who will explore specific targeted treatments with them. Above all, it is important to recognise the links between hormones and mental health.