United States Vice President Mike Pence’s remarks at the end of this year’s summit season just about blasted the word “cooperation” out of the APEC acronym. Amid ill-concealed US-China tensions, it had already been looking out of place.

Pence unveiled US plans to help Australia and Papua New Guinea - APEC’s host this year - expand a military base on Manus Island, which is in PNG. In September, Australia had already announced funding for an upgrade of the facility.

Former Australian foreign minister Gareth Evans famously declared in 1993 that APEC was “four adjectives in search of a noun”. As one of APEC’s founding fathers, he could be forgiven for getting the parts of speech slightly wrong.

But 25 years on, “cooperation” is looking doubtful. The Asia-Pacific Economic Cooperation forum set sail in Canberra in 1989. Two former prime ministers, Bob Hawke and Paul Keating, lay some claim to its parentage. APEC has grown to boast 21 member economies (where China, Hong Kong and Taiwan are listed as separate member economies).

APEC is part of summit season in Asia in November, and the one closest to Australia’s heart, given its origins in Canberra. Three other big set pieces are also held within this week each year and bring all the key players in the region together, ostensibly to talk about advancing cooperation, community building and grappling with common problems. Two others relate to ASEAN, the grouping of 10 South-east Asian nations - its annual summit, and the ASEAN Plus 3 meeting where they bring in South Korea, Japan and China. Then there is the East Asia Summit, which comprises the 10 ASEAN members, plus Australia, China, India, Japan, New Zealand, South Korea, the United States and Russia. These talk-fests give states and economies, great and small, the chance to advance a broad-ranging positive agenda.

But the many handshakes, photo ops and positive sounding joint-statements could not mask the reality of hardening US-China geopolitical competition. It is a cruel irony that a group of meetings created to advance cooperation became the platform for what amounted to a very public drawing of lines of great power competition.

Feelings were mixed when it was announced US President Donald Trump would go to Europe for the centenary of world war one’s truce this year, instead of Asia’s summits. The signal sent that the president does not prioritise the region is unmistakable. 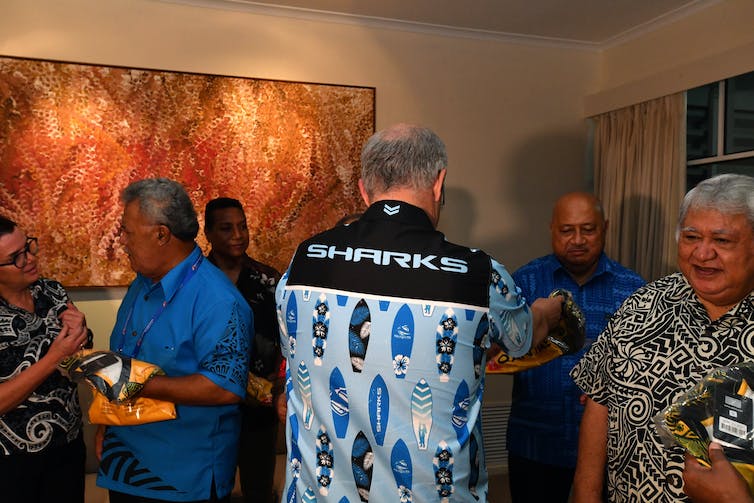 During his visit, Pence put on a stern face on US policy, and in his speech to the APEC CEO Summit he reinforced the United States’ wish to build a relationship with China, based on “fairness, reciprocity, and respect for sovereignty”. In earlier comments to the Hudson Institute he accused Beijing of stealing military blueprints, “and using that stolen technology, the Chinese Communist Party is turning ploughshares into swords on a massive scale…”.

Washington now sees itself in full spectrum competition with China for regional and global influence. Pence portrayed China as an aggressive and almost imperial power with a malign regional vision. In contrast, he emphasised that the US wanted to protect an open and rules-based system of genuine partnerships. He underscored the long-term nature of this commitment.

The problem, both for Washington and its partners, is that this new muscular approach to China is, as yet, not fully resourced, and does not align the military aspects with trade - notwithstanding the Manus announcement.

Trump’s economic nationalism jibes badly with the interests of its partners and its long term regional strategy. A free and open Indo-Pacific sits uncomfortably with America’s economic nationalism, imposing tariffs on allies and pleas for multilateral approaches being summarily dismissed. 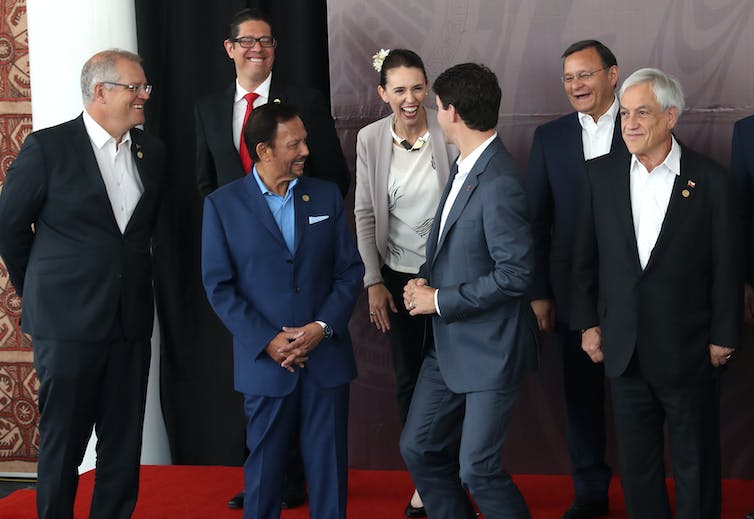 New Zealand’s Jacinda Arden and Canada’s Justin Trudeau share a laugh as Scott Morrison and other APEC leaders look on.

At the same CEO summit, Xi Jinping gave a rare major address outside of China. Like Pence, he sought to lay out a vision for the region that presented China as a force for economic openness, integration and development.

Continuing the themes first articulated at Davos in 2017, the unstated but obvious point of contrast was with America. Xi also rebutted criticism of the Belt and Road Initiative, declaring it was neither a trap nor a geopolitical gambit but an “open platform for cooperation”. But as with his earlier efforts to paint China as a defender of economic openness, the claims remain unconvincing.

Hosting APEC in PNG was fitting, given the south-west Pacific has become a key site of US-China competition. The Manus announcement, along with another that a group of Western allies would collaborate to drive a massive electrification project in the country, gives a concrete sense of what this means for the region. As in the Cold War, when Soviet-American rivalry led to bidding wars in the developing world, today China and the US are competing for influence in the form of infrastructure and development funding.

Read more: Pence visit reassures that the US remains committed to the Asia-Pacific

If the speeches laid down rhetorical battle lines, APEC’s conclusion showed the consequences of this competition. For the first time in the grouping’s history, APEC members were unable to agree on the wording of a final communique. While a new Cold War is not yet here, this is another worrying step toward a serious rift in the global economy and geopolitics.

The biggest loser of the summit season is probably ASEAN. Founded in 1967 to wall off the newly independent states of south-east Asia from Cold War competition as the Vietnam war escalated, the grouping’s principal purpose has been to ensure the region does not become the wrestling mat of great power competition. It had been crucial to ensuring this goal was met in the Cold War and its aftermath. Events of this past week show it is finding that much harder to achieve as the geopolitical temperature rises.

If there were any doubts, Asia’s summit season confirms that the region has entered a new phase. Great power competition is now Asia’s most important dynamic. Even though the set piece theatre is about community building and cooperation, the reality is that China and the US have irreconcilable visions for the region and its future.

The only question is how much they are willing to pay to prevail in the contest for Asia’s future.