In this, their 40th year performing, Circus Oz have combined their many talents with German musical duo Astrid and Otto (aka Australian comedians Clare Bartholomew and Daniel Tobias from Die Roten Punkte). Their show, Rock Bang, fuses music, theatre, cabaret, comedy and acrobatics.

In our world of hyper-sensory experience, there is almost an expectation that we are able to juggle such diverse forms. But the most rewarding aspect of this show, under the artistic direction of Rob Tannion, is when a particular artform is given the space to shine. 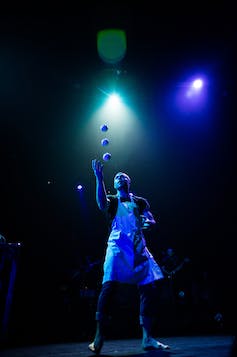 It is built around the narrative of Astrid and Otto’s (fictional) lives: their escape from dire childhood circumstances in rural Germany to Berlin, just as the wall is coming down; their absorption into the city’s music and cabaret scene, and the formation of their band Die Roten Punkte (The Red Dots), which features the tiniest of drum kits and other errant sound-making objects. Astrid and Otto eventually “wake up in Wagga Wagga” (as you do)!

One of the standout scenes in the telling of this narrative is the use of the audience as forest, where Astrid and Otto seek reassurance and shelter after fleeing home. It’s a simple, but effective metaphor.

Circus Oz’s acrobatic skills provide many highlights. The juggling of pizza dough balls, in a scene set in a Berlin pizza parlour begins with one ensemble member dressed as a baker. Gradually, all are drawn in. The use of sight gags - such as flying pizza trays and dropped pizza balls being picked up, dusted off and placed back on the tray - and the coordination of it all, is highly skillful and provides great comic theatre. 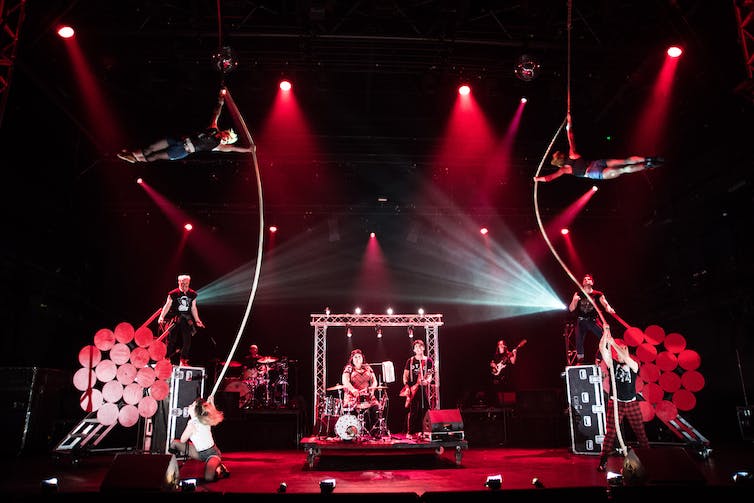 Mark Turner Otto has a pivotal moment when David Bowie visits Berlin in 1990. With Bowie’s theatricality and mixed musical genre approach, it is easy to understand the influence he has on Die Roten Punkte. It is, ostensibly, from this point that the duo decide to get into rock and roll, with Bowie as guardian angel. The impact of the experience is explored when a Circus Oz member in golden garb aerially performs beautifully choreographed movements largely within the confines of a large metal hoop. This angel appears as different phases of the moon, shining down on Otto as he sings. Bowie’s Space Oddity is also referenced when Otto becomes somewhat estranged from reality in a scene that sees him aloft in a spaceship, lost in another world. All hands are on deck for lighting and musical effect. It works incredibly well. The scene echoes the Australian band Jet’s earlier exploration of this theme in the song, Timothy. 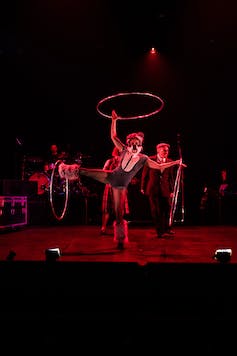 Mark Turner Astrid works effectively with the Circus Oz ensemble in a range of scenes. But two juxtaposed sections in Rock Bang point out the need for the arts community to always think innovatively and beyond clichés when depicting those who are marginalised in society. They are set in rehab unit where Astrid finds herself in detox. In the first scene, perhaps with a desire for a setting that will enhance the acrobatic spectacle, it is unfortunate that caricatures of those suffering from mental illness are used. The next scene, however, as Astrid seeks an escape route from this confinement, is wonderfully inventive. All cast members assume Astrid’s persona. We are privy to multiple Astrids and a medley of beautifully choreographed and executed movements as she manoeuvres her getaway. When Otto and the Circus Oz cast explore the growing techno music scene that developed in Berlin and other parts of Europe in the 1980s and 90s, Otto takes on the persona of a robot. Musically, visually and theatrically, the scene - featuring the song, Robot/Lion, about a robot who wants to be a lion - works very well. It is pure Daft Punk (who themselves have have drawn on Kraftwork), with a touch of Bowie. Otto and Astrid’s musical exploration of Kraftwerk’s ambivalence towards the positive and negative impact of technology on humanness, is also explored in this song. A toy lion is Otto’s motto of resilience and love throughout the opera. It is used as a substitute when there is no human to fulfil the role. And we remain aware that despite the intrigue of robotics, this one is the very human Otto. Musicians Tamara Murphy, Casey Bennetto, Dean Matters and Shannon Bourne ably perform across the vast array of rock genres, from techno to punk, as they accompany Otto and Astrid’s songs and experiences. Rock Bang is a highly charged and rewarding multi-sensory experience. Rock Bang is being staged at the Malthouse until November 25.