Starting on December 8, recreational abalone fishing will be allowed in Perth. Fishing will be limited to one hour on four Saturday mornings between December and February. The maximum catch is still 15 per person per day. A complete ban on abalone fishing between Geraldton and the Northern Territory border will remain in place.

Read more: Abalone poaching: lifting the lid on why, how and who

This brief, intense season is a social and dining highlight of the year for many Australians – particularly Chinese migrants. It’s also a risky business, with dangers to both people and the reefs the abalone grow on.

As part of our research, my colleague Li Chen and I interviewed abalone fishers (and even took part ourselves). We found that more needs to be done to communicate how to fish for abalone safely and sustainably, especially on Chinese social media.

Abalone is popular but vulnerable

Among Chinese people, abalone represents wealth and confers social status. In some Hong Kong restaurants, dried abalone can sell for as much as A$5,000 per 500 grams.

But abalone is a fragile marine resource. Western Australia is one of few places in the world with relatively healthy wild stocks.

Among the 11 species found in the state, only brownlip, greenlip and Roe’s abalone grow large enough to be collected. 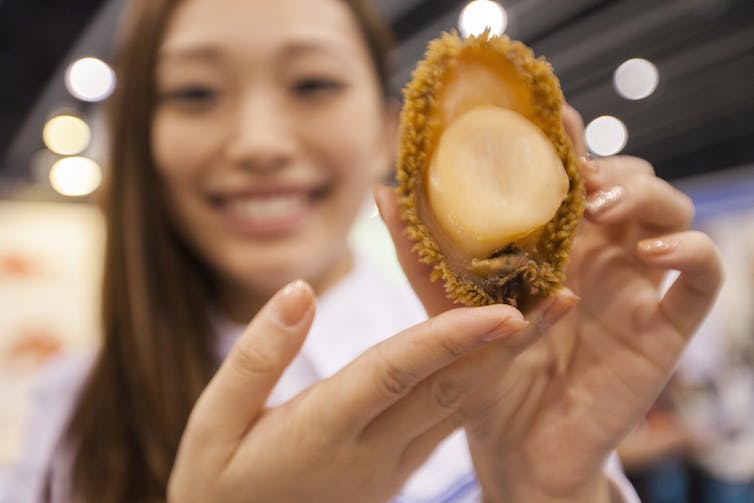 According to a WA Department of Fisheries report, around 3 tonnes of greenlip is collected illegally each year on the state’s south coast alone.

Despite mounting pressures, the slow-growing mollusc is increasingly sought as a delicacy.

More than 17,000 recreational licences are issued annually in WA. Yet the safety risks, ecological impacts and cultural factors at work each season are not well understood.

Earlier this year, a man drowned while collecting abalone at Ocean Reef Marina in Perth. Five recreational fishers have died since 2012.

In preparation for the upcoming season, SLSWA has developed a new campaign including online images of safety equipment and translations of safety brochures into Chinese.

Chrissie Skehan, health promotion and research coordinator for SLSWA, explains that “a key target demographic for our campaign has been internationals, particularly the Chinese population”.

Known as a “dive fishery,” the commercial abalone industry in WA operates mainly in shallow waters off the south coast. In contrast, recreational fishing around Perth requires wading and snorkelling.

Regulations attempt to reduce the impacts of the intense four-hour season on ecosystems that are already vulnerable to climate change. Wear on reefs would be severe if not tightly managed.

In our survey, which spanned two Perth abalone seasons, we interviewed Chinese migrants and took part in the activities so as to get a feel for the experience.

Our research suggests that more education is needed to reduce environmental impacts and personal risks. Increasing cross-cultural understanding through the abalone harvest is important.

For the people we interviewed, the benefits outweigh the risks. Abalone fishing contributes to personal well-being and social networks.

When Billy Han first encountered wild abalone more than 13 years ago, he could not believe the sea treasure was real. “I thought it was impossible to find abalone at the roadside. It is so expensive in China.”

Duan Xin, an experienced fisher, took only ten minutes to reach the daily bag limit of 15 abalone. He spent the rest of the hour helping others learn how to fish while staying safe. The experience each year strengthens Duan’s standing as a mentor.

The abalone season builds a sense of community among Chinese migrants. But participation can also enhance awareness of the environment.

For Tommy Zhan, fishing was a chance to learn more about the coastal habitat. “I know what abalone looks like and tastes like, but I do not know how to harvest it or about the places where it lives.”

Chinese people share fishing stories and swap recipes in person and on social media. These exchanges allow them to adapt ancient traditions to the local environment.

The future of the abalone season

We recommend the inclusion of stronger marine conservation messages in public outreach and safety campaigns.

Undersized abalone can die if returned to the sea upside down. Shelling on the beach can attract sharks and other marine predators.

Conservation and safety groups could work with community leaders such as Duan Xin to spread information via Chinese social media networks rather than English-only channels.

Environmental education will be essential to the long-term sustainability of the abalone harvest.

Read more: We discovered 20 new fish in northern Australia – now we need to protect them

Not merely a management issue, the upcoming season is an opportunity for cultural dialogue in a city that is growing more ethnically diverse all the time.

This article was coauthored by Li Chen, drawing on research conducted for her PhD at Edith Cowan University.