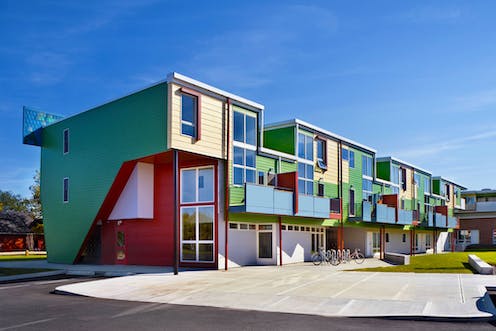 Institutional investors would receive longterm subsidies to build new dwellings - on condition they rented them out below market rates - under an affordable housing program Bill Shorten is announcing on the first day of Labor’s national conference in Adelaide.

A Labor government would offer 15 year subsidies - $8500 annually - for investors building new homes provided they charged rent at 20 per cent under the market rate.

The program would cost $102 million over the forward estimates to 2021-22 and $6.6 billion over the decade to 2028-29. The costing was done by the Parliamentary Budget Office.

In his Sunday keynote speech, part of which was released before delivery, Shorten says that the ALP’s ten-year plan to build 250,000 houses and units would be Australia’s “biggest ever investment in affordable housing”. The plan includes 20,000 dwellings in the first term of a Labor government.

“This is a cost of living plan, a jobs plan and a housing plan. It will give working families a fair go to put a roof over their head now - and save for their own home in the future.”

Shorten says these dwellings would be available to renters on “low and moderate incomes”. A family paying the average national rent of $462 week could save $92 a week.

“Labor’s plan will provide investors with certainty to build - knowing that they will have long term government support and guarantees beyond the decade.” He says access to housing is one of the biggest challenges to dealing with intergenerational inequality, as an increasing “wealth gap” locks people out of the housing market.

“Increasing the supply of affordable housing is critical to addressing pressures on disposable income, and in turn, addressing inequality.”

“Despite this success, the Liberals have abandoned affordable housing and axed the subsidies that encourage affordable housing. There is a severe shortage of affordable rental housing in Australia and many families are struggling to find and keep a roof over their heads. The number of Australians experiencing rental and mortgage stress is at record levels.”

Overseas students, temporary foreign workers and other non-residents would not be eligible to rent under the Labor scheme.

Shorten says the plan would support the ALP’s reforms to negative gearing “which direct concessions to newly built premises and encourage housing construction”.

Labor hopes that the three day conference will end the year on a high note for it, after its strong two party performance in polling during 2018. Maximum effort has been made to ensure that internal policy differences are managed to avoid damaging public divisions.

Shorten told a press conference on Saturday that he hoped to see “energetic, enthusiastic debate” at the conference.

He said “perhaps the most valuable proposition that Labor presents the Australian people at the federal election within the next five months - it’s a united team, it’s an energetic and it’s a team with vision”.

Shorten defended his undertaking that Newstart would be reviewed ahead of an ALP government considering an increase.

“I think Newstart is too low. I don’t think anyone who says that it needs to increase is wrong”

“But what we’ll need to do from government is review the level, and understand the implications of increasing Newstart, along with the impact on all of our other taxes and payment systems”

“We have to look at what we can afford as a nation. But we’re not reviewing Newstart to decrease it”

On the sensitive issue of asylum seeker policy, Shorten told his press conference a Labor government would put whatever resources were needed into stopping boats.

It would also support regional and offshore processing. It would take refugees into Australia - “properly, not via people smugglers”.

“We want to be a good international citizen - we also recognise however that we’ve got to make sure that whatever policy we adopt, we can afford, and that it meets our combined goals of not keeping people in indefinite detention on Manus and Nauru but also keeping our borders strong, so we never again see the people smuggling trade start up”.