In an era where local and international politics risks being less believable than a long-form TV series like House of Cards, it is apposite that the latest exhibition at the Australian Centre for Contemporary Arts (ACCA) in Melbourne focuses on ideas about artifice and illusion, truth and fiction and sleight of hand.

While not expressly political, Theatre is Lying exposes how visual art, performance and theatrical devices can interrogate what is real and what is not.

The artworks by Sol Calero, Consuelo Cavaniglia, Matthew Griffin, Daniel Jenatsch and artistic collaborators Anna Breckon and Nat Randall, employ digital montage, animation, video, light and sound and theatrical installations. Commissioned specifically for ACCA, these screen-based works and installations are a welcome response to a year bloated with fake news and alternative facts, offering critique, humour and escape rather than despair and cynicism.

Theatre is Lying not only offers conceptual and abstract means to engage with the truths and fictions of the contemporary world, but also presents alternative narratives and other way of reflecting on theatrics of politics against the backdrop of the 24/7 news cycle.

Recently the largesse of visual arts patrons has seen private collectors build new public museums, but the legacy of the Macfarlane Biennial Commission, which supports this exhibition, goes beyond bricks and mortar to directly support current artists. For the next six years, the fund will fund the creation of ambitious and possibly career-defining works, forming keynote projects in ACCA’s exhibition program.

This, the first in the series, is characterised by artistic director Max Delany and senior curator Annika Kristensen, as an exhibition in five acts. 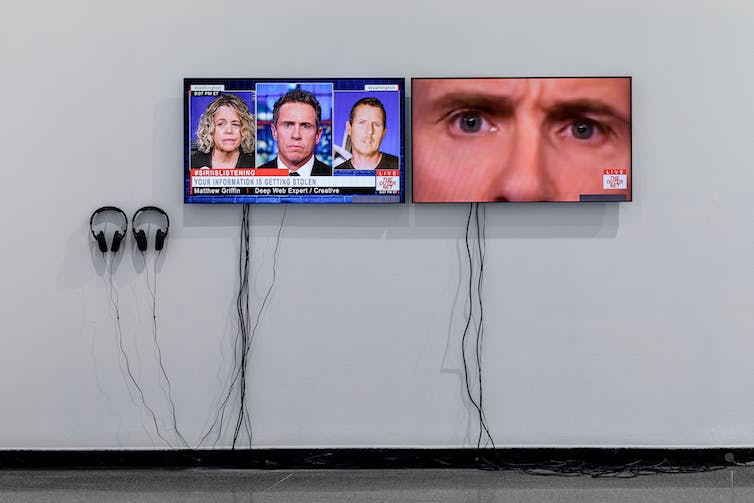 Act One lampoons and hijacks TV current affairs. Utilising spilt screen formats, found footage and montage, artist Mathew Griffin inserts himself into absurdist panel discussions that replicate the everyday conventions of current affairs TV. At first glance the interviewee (Griffin) resembles another gormless commentator or politician who has not learnt to pause for breath. Only with close scrutiny is the artifice revealed.

One can’t help wondering initially if Randall and Breckon’s Rear View (2018) employs green screen to simulate a car travelling along the highway. Shot continuously with no edits, the 90-minute video operates at the intersection of cinema and performance art, referencing classic road movies. 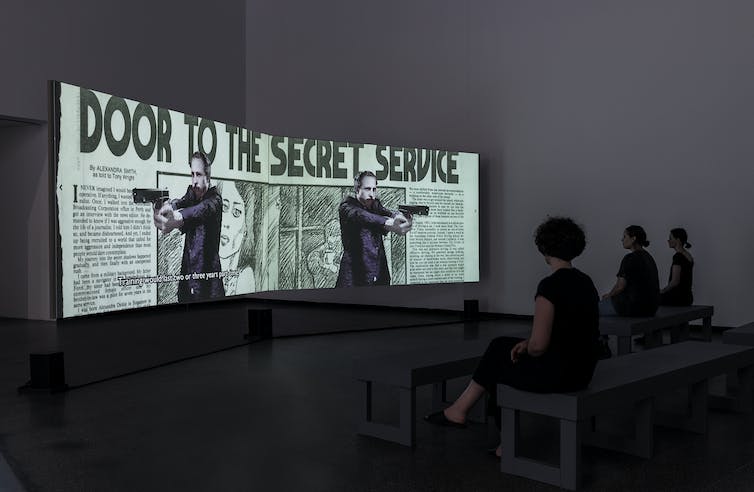 The banality of the real time action and inaction becomes a feat of endurance coupled with forced voyeurism. Throughout the movie, the two women (Randall and Linda Chen) talk intermittently over the hum of the car while staring ahead and rarely making eye contact. The narrative is unclear; the reason for the journey and the relationship between the women is never explained.

Yet the boredom is fractured by the sound of wriggling, a bit of singing, a clinch that goes wrong and the pitiful crying that ensues when that advance has been rebuffed. In the end, the rear view of the road is the only certainty that can be believed.

The Sheraton Hotel Incident is an artistic interpretation of a stranger-than-truth event involving an inexplicably bungled training exercise by Australian Secret Intelligence Service (ASIS) agents in 1983. The purpose of the exercise was to rescue hostages from fictional foreign captors but ASIS failed to inform either hotel management or the police. Jenatsch employs the clichés of film noir and spy movies to recreate the event and subsequent enquiry.

The screen is often split and the action is realised through archival images, reports and animated action overlayed with written dialogue like “Sir, we have missed our target”. It is the simplicity of the animation that is most striking about this work. The action is presented in single frame images and the odd crumbly surfaces of the bodies and objects suggest a “Mummy movie” and a new surrealist weird.

In stark contrast to the fast pace and cliches of The Sheraton Hotel Incident, Colero’s La Puerta relies on the audience to produce the action. There are no performers here, instead the artwork is populated with spectators who encounter the constructed space. 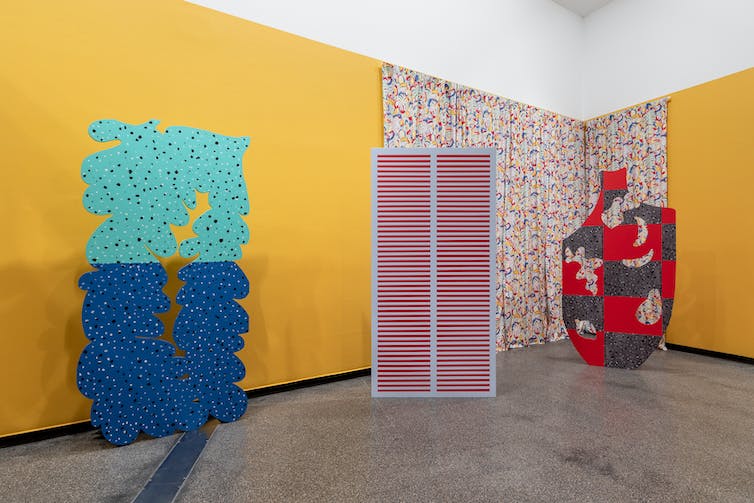 Easily recognised as a set for live theatre, the artist performs an elaborate transformation employing painted arches, screens and blinds to create the illusion of depth. Redolent with colour and patterning drawn from Colero’s Venezuelan heritage, the effect is disrupted by the exposure of raw timber framing in order to emphasise the things that are seen and the things that are not. In this case it is Colero’s ongoing engagement with issues about colonisation and identity. 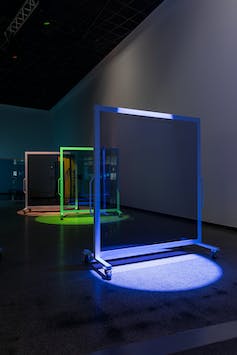 By contrast Cavaniglia’s installation is pure theatre and illusion, comprising spotlights and search lights that are reflected and refracted through moveable glass screens. The theatrical is realised via an interplay of the coloured light that penetrates the screens, landing on the wall and floors and bathing the space and the audience with colour. Chance encounters between lights, screens and viewers are at the core of this work.

The gallery spaces at ACCA have no designated beginning or end point. Nor do the individual acts provide a conclusion. Rather, they offer an open-ended means to consider allusion, illusion, truth, lies and transparency.

Over summer, Theatre is Lying is an invitation to pause and unpick the way narrative and artifice are created and perceived and so sharpen the critical senses in anticipation of the performances that will be presented to us in the year to come.