It’s never been easier for university students to cheat. We just need look to the scandal in 2015 that revealed up to 1,000 students from 16 Australian universities had hired the Sydney-based MyMaster company to ghost-write their assignments and sit online tests.

It’s known as contract cheating – when a student pays a third party to undertake their assignments which they then pass off as their own. Contract cheating isn’t new – the term was coined in 2006. But it’s becoming more commonplace because new technologies, such as the smart phone, are enablers.

Read more: 15% of students admit to buying essays. What can universities do about it?

Cheating is taken seriously by universities and the national regulator, the Tertiary Education Quality and Standards Agency. Much of the focus has been on changing assessment tasks to ones deemed to be harder for a third party to undertake. This is called “authentic assessment”.

This type of assessment has been widely adopted at universities. They are comprised of tasks that evaluate knowledge and skills by presenting students with real-world scenarios or problems relevant to the kinds of challenges they would face following graduation. But new research found authentic assessment may be as vulnerable to cheating as other more obvious examples, such as essays.

What the research shows

This new study was conducted by academics from six universities, led by Tracey Bretag and Rowena Harper from the University of South Australia. The research – part of the federal government’s Contract Cheating and Assessment Design project – surveyed 14,086 students and 1,147 staff.

The goal of this research was to collect and understand student’s perceptions of the likelihood of cheating on 13 different assessment tasks. The research then asked teaching staff which of the 13 tasks they used. 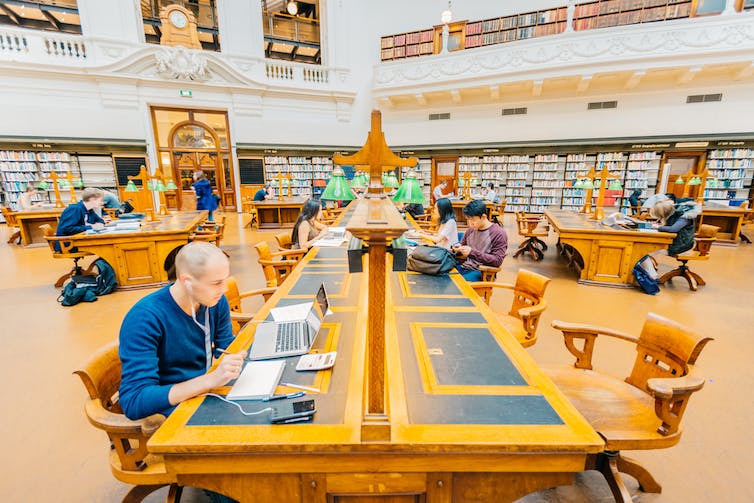 Unique, in-class tasks were perceived to be the hardest to cheat on. from www.shutterstock.com

The researchers have previously reported from this data set that 6% of students admitted to cheating. The purpose of the current round of analysis was not to understand the extent of cheating, but perceptions of how easily it might be done, and if that correlated with the tasks educators set.

They found, for both students and teachers, assessments with a short turnaround time and heavily weighted in the final mark were perceived as the tasks which were the most likely to attract contract cheating.

Assessments perceived as the least likely to attract contract cheating were in-class tasks, personalised and unique tasks, vivas (oral explanations of a written task) and reflections on practical placements. But these tasks were the least likely to be set by educators, presumably because they’re resource and time intensive.

For universities, that means they must assume cheating is always possible and simply changing what assessments they use will not combat the problem. 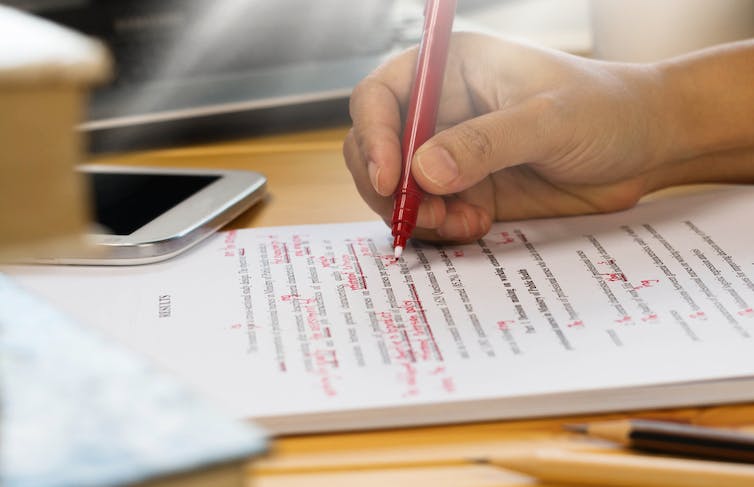 Authentic assessment might be as vulnerable to outsourcing as essays. from www.shutterstock.com

Many experts have advocated the use of supervised exams to combat cheating. But this new research adds to a growing body of evidence that exams provide universities and accrediting bodies with a false sense of security. In fact, previous data has shown students reported engaging in undetected cheating on supervised exams at higher rates than other types of cheating.

Another common approach is to use a series of small, graded tasks, such as spontaneous in-class tests, sometimes called continuous assessment. Even here, students indicated these were the third most likely form of assessment to be outsourced.

Who’s most likely to cheat?

Students from non-English speaking backgrounds hypothesised cheating would be most likely to occur in assessments that required research, analysis and thinking skills (essays), heavily weighted assignments and assessments with short turnaround times. 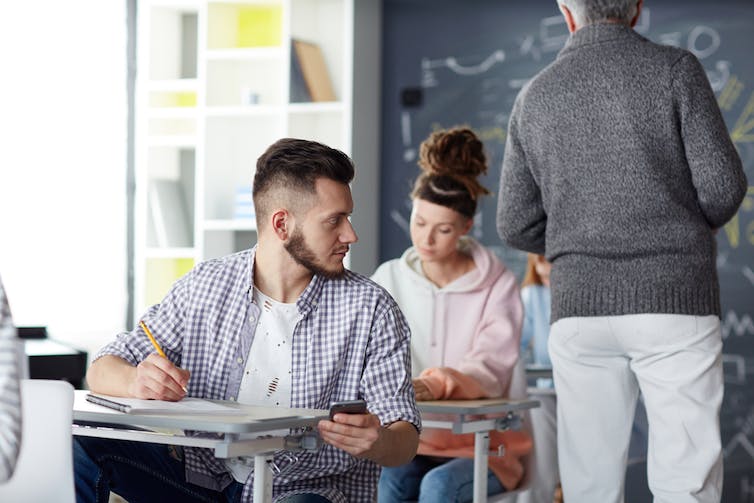 Students were still likely to cheat on supervised exams. from www.shutterstock.com

Perhaps unsurprisingly, students who indicated they were satisfied with the quality of teaching were less likely to think breaches of academic integrity were likely. In other words, this confirms previous research which showed students dissatisfied with their educational experience are more likely to cheat.

So what do we do about it?

This research provides yet more compelling evidence that curriculum and changes to teaching strategies and early intervention must be employed to support students’ academic endeavours.

The researchers also point out high levels of cheating risks undermining the reputation and quality of Australia’s A$34 billion export sector in international education.

The data demonstrates assessment tasks designed to develop relevant professional skills, which teachers are highly likely to set, were perceived by students as tasks that can easily be cheated on. These might include asking accounting students to memorandums, reports or other communication groups to stakeholders, such as shareholders. In fact, among students from a non-English speaking background, the risks of cheating might actually increase for these tasks. This means authentic assessment might run the increasing risk of being outsourced.

Read more: Assessment design won’t stop cheating, but our relationships with students might

This research shows the relationship between contract cheating and assessment design is not a simple product of cause and effect. In fact, the nature of the task itself may be less relevant to the prevalence of cheating than other factors such as a student’s from non-English speaking background’s status, perceived opportunities to cheat or satisfaction with the teaching and learning environment.

All educators must remain vigilant about cheating. Teachers must be properly resourced by their universities to ensure they can create rich learning environments which uphold the integrity of the higher education system.

Burdened with large debts and facing a precarious job market after graduation, it’s perhaps unsurprising some students, particularly those who are struggling academically, take a transactional approach to their education. This new research provides more clear evidence contract cheating is a systemic problem that requires a sector-wide response.