Few things are as valuable as a bright idea.

But genuinely fresh ideas do emerge from time to time, often in the heads of political advisers (especially those that come from outside politics) or of academics whose mission is to work out how to make things better without caring about the likelihood of their ideas being accepted.

Australia has long punched above its weight developing ideas for the rest of the world, among them Torrens Title, the secret ballot (referred to elsewhere as the “Australian ballot”), the living wage, the eight hour day, taxing married women as individuals rather than as part of their husband’s household, allowing women to stand for parliament, universal government-provided unemployment benefits, free and compulsory primary school education, free healthcare Medibank, which became Medicare, and affordable education through the Higher Education Contribution Scheme.

How we do it, how we manage to move beyond the obvious to find genuinely new ideas that work, is explored in a new book released this year entitled Hybrid Public Policy Innovations: Contemporary Policy Beyond Ideology, edited by Mark Fabian and Robert Breunig of the Crawford School of Public Policy at the ANU.

Here are my seven favourites on business and the economy from 2018: 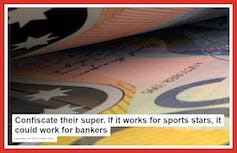 Withdrawable superannuation Liam Lenten is road-testing the design of a system that would direct a proportion of the pay of sports stars and chief executives (say 10%) into a trust fund to be paid out a certain number of years after they retire. If they have been found to have embarrassed the firm or brought their industry into disrepute, they would forfeit some or all of it. It would concentrate their minds. 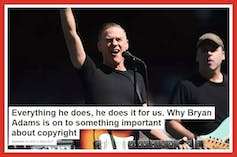 Allowing authors to reclaim their copyrights Rebecca Giblin points out that in order to get published, authors are willing to sign away their copyright for life (which given the Australian copyright term, means life plus 70 years). But publishers hardly ever publish for that long. Forcing copyright to revert to authors after 25 years would enable them to regain control of their work and ensure it didn’t disappear. 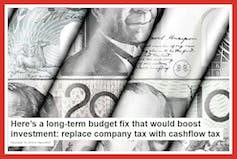 Replacing company tax with cashflow tax Ross Garnaut, Craig Emerson and Reuben Finighan suggest taxing companies not on profit, but on cashflow – money in minus money out, with no deductions for interest payments or payments that aren’t at arm’s length. It would make investment in new equipment much more attractive and payments to tax havens much less attractive. It would raise more and secure our tax base.

Paying households a carbon tax dividend Richard Holden and Rosalind Dixon want the proceeds of a A$50 per tonne carbon tax paid to households as a tax-free bonus of about A$1,300 per adult per year. Relative to their incomes, low-income households would gain the most, and even after paying more for electricity, all but Australia’s highest earners would be better off. It would build a constituency for the carbon tax.

Tapping superanuation earnings to fund aged care Ben Spies-Butcher suggests imposing a flat levy on the lightly-taxed income within super funds in order to bring aged care up to the necessary standard. Because older people have bigger super accounts, it would fall most heavily on those nearer to needing aged care. In principle it would be no different to the (not particularly useful) insurance fees taken out of super accounts. 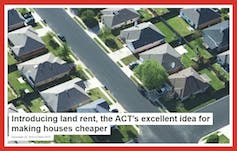 Allowing homeowners to rent land instead of buying Cameron Murray says if instead of buying land, homeowners could buy the house on which it was built and rent the land for 2% of its value per year, they could occupy their home for as long as they wanted and still give the owner a decent profit when they moved and the land had grown in value. It would be cheaper than renting and they would get security of tenure. 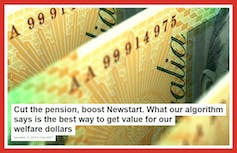 Targeting payments so that they cut poverty Ben Phillips, Matthew Gray and Richard Webster have built an algorithm to calculate how to get the biggest cut in poverty out of any given payments budget. A test run points to big gains from using modest cuts to the pension and family benefits to fund a substantial increase in Newstart, one far bigger than proposed by the “raise the rate” campaign. And here’s one more. It isn’t new, but it is built on an insight as old as ideas themselves. While big ideas have their uses, as “lighthouses” that can point the way to where we could be, most of the time change happens by “tinkering”, making a series of minor adjustments, with a result that is evenutally impressive. 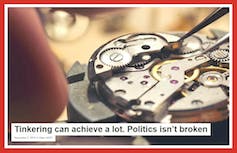 Emily Millane argues that it is important not to despair. Removing rough edges, hammering away at what we’ve got, all the time being guided by what could be, can eventually give us results as good as those that would have wanted to have sprung up fully formed. It’s how things usually happen, and it’s worth doing, even if it takes decades. Here’s to progress, and to good ideas, in 2019. Read more: Tinkering can achieve a lot. Politics isn't broken