2018 has been miserable in so many respects, yet it ends with hope, and from the least expected quarter: the Australian cricket team.

Australian cricket and Australian public life have declined in tandem over the past few years, dragged down by the same bogies. Their tempers became foul, the mindset and rhetoric malign, and winning at all costs, driven by a voracious hunger for money, became everything.

People with decent values had their stomachs turned. We turned off the cricket, and turned away from the Liberal and National parties, which have been, and look set to continue, getting the electoral hidings of their lives.

Then summer arrived and with it, the touring Indian Test team. The Adelaide Test was engaging. The unexpectedly tight, clean contest kept us – and this felt surprising – watching just another over, and then another, until we surprised ourselves even more by watching the whole match.

Read more: Australian cricket's wake-up call on a culture that has cost it dearly

Who were these batsmen? Most of the surnames were barely known. Some looked barely old enough to shave. They were fresh-faced, unpocked by the pestilence that marked the big, old and now ugly names of Australian cricket tarnished by a toxic sledging culture and, in the case of former captain Steve Smith and former vice-captain David Warner, outright cheating that shamed the nation.

Travis Head from the little South Australian country town of Gawler, north of Adelaide, embodied this new moment in Australian cricket. The young left-hander walked onto Adelaide Oval with boyish hope quietly written on his face that he could make a century for his country playing on his home ground for the first time in only his third Test match ever. He top-scored in the first innings with a fighting 72. When he walked from the field, one felt like giving him a hug and telling him not to drop his head – to keep it high. He had done well, played cleanly, made the country proud. 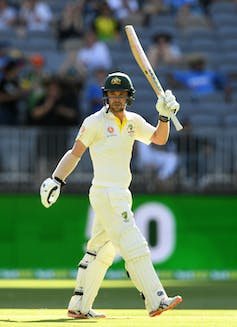 Some of the reportage around Head created what seemed like a wormhole into a previous Australia. His family and friends were concerned about the train timetable between Gawler and Adelaide, and whether it meant they would have to stay overnight in Adelaide so as not to miss any play. Could they afford it if they had to? That Australia still exists, and to hear it discussed in the context of the glittering, money-soaked world of international cricket was just the sort of philosophical corrective of which it needs more.

The Australian fightback to nearly win the Adelaide Test from an apparently hopeless position was another surprise, the kind that brought us back to the second Test at the new Perth Stadium. The Perth wicket was an enigma: playing up then quietening down in an unpredictable pattern, keeping bowlers and batsmen on their mettle and interest high. As commentator and former England cricketer Isa Guha said, the Perth wicket had its own entire narrative in the game.

And that was another pleasant surprise, the normalisation of women commentators mixed in with the usual wall of men: Isa Guha on Foxtel, and presenter Mel McLaughlin, former Australian Test player Lisa Sthalekar and regular BBC cricket commentator Alison Mitchell on the Seven Network.

Tone really matters. Australian captain Tim Paine is the man of the hour. While the male cricket commentators gush over Virat Kohli, Paine is the one showing outstanding leadership in the best Australian tradition rather than the ugly one. He is getting little recognition for it.

The fact is, Paine is a better captain than Steve Smith ever was. The team is in good psychological shape and his pleasant, matter-of-fact persona doesn’t detract from an unequivocal competitiveness that delivered a convincing Australian win in the second Test.

Kohli looked ridiculous with his machismo-driven attempted chest bump when India couldn’t overwhelm the Australian batting line-up at Perth. Paine was magnificent, refusing to take the bait and instead just getting on with an emphatic win.

Compare and contrast with Prime Minister Scott Morrison’s embarrassing performance on his visit to Australian troops in Iraq just before Christmas. “So how good’s the 7th Brigade?” he posed, both thumbs up Trump-style, to 7th Brigade ADF troops assembled uncomfortably for a prime ministerial picture opportunity.

Read more: The day Australian cricket lost its integrity and a country reacted with shock and anger

Reluctant to be revved up, US-style, in Morrison’s political interest, they gave him a delayed and barely audible murmur in reply. “That wasn’t a very enthusiastic response!"’ he boomed back, raising his thumbs and his volume higher to demand again, forcefully: "How good is the 7th Brigade?”

Australians don’t like forced rah-rah. We don’t like cheats and clowns either. If the Australian cricket team can unexpectedly regenerate, after public revulsion made the wrongdoers pay a proper price and forced a clean-out of the administration that pushed them down the wrong path, maybe there is hope for Australian politics too. Happy Boxing Day and here’s to a good New Year.