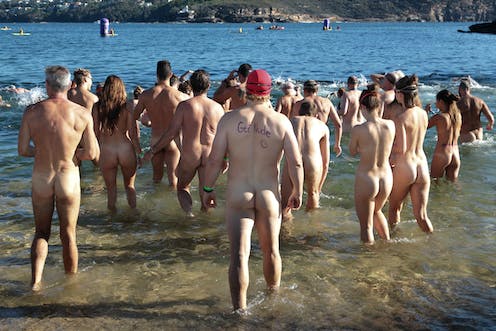 The warm days of summer are almost upon us. Nudity on some Australian beaches is inevitable. But exactly how much of our flesh can we bare, and when, and where?

It should surprise no-one that, when it comes to the law and naked bodies, context is everything. The man who strips off for the sauna at the gym without any repercussions could be subject to a fine of many thousands of dollars if, a few hours later, he were to streak across the MCG during the cricket. The woman who plays beach volleyball in her birthday suit at New South Wales’ oldest nudist stretch of sand, Lady Bay Beach, without legal consequences could be fined an hour later should she not put on some form of covering when walking back to her car.

Whether someone’s personal exposure attracts the attention of law enforcement depends upon what is deemed by officers to be an “obscene” act or “indecent” exposure. The words of the Office of Film and Literature Classification can be adopted usefully here. To determine whether something (or someone) is obscene or indecent, police must take into account the standards of morality, decency and propriety generally accepted by reasonable adults.

While there are many prosecutions around the country each year for lewd behaviour generally (which would include “flashing” and indecent exposure), prosecutions for nakedness on its own are extremely rare. There is one famous exception, but we need to go back four decades to rural Western Australia to find it.

Peter Shaffer’s 1973 play Equus requires a male actor to appear naked on the stage for a short period. When it was staged in Geraldton in 1977, a woman in the front row complained to police. The Dutch actor Robert van Mackelenberg was arrested after a subsequent performance. He spent a few hours in the local lockup before being released on bail.

Upon his later prosecution for obscene behaviour, the magistrate posed the following question: Did the actor’s lack of modesty offend modern sensibilities by violating contemporary standards of decency? The magistrate quickly determined that the answer was “no” and the prosecution failed. Indeed, the court report mentions that the police officer investigating the matter and subsequently giving evidence “enjoyed the play and found it meaningful”.

Let’s look more closely at the issue of public undress on a beach during the summer.

The statutes governing the broad field of indecent exposure or lewd behaviour are scattered throughout the criminal law of all states and territories, typically in what are referred to as “summary offences” acts. “Summary” is a legal term that refers to the fact that they are less serious offences, heard in magistrates’ courts.

Police are given the responsibility of deciding, at their discretion, whether the circumstances of a person found in a state of undress amount to indecent or disorderly conduct, or involve an obscene or lewd act.

The use of the word “person” saved the legislators from having to use the word “penis” or “genitalia” which, presumably, offended the sensibilities of members of the Northern Territory legislative chamber at the time.

If a beach has been proclaimed as permitting unclad bathing, there will be a proviso in the legislation, for example as found in section 23A of the South Australian Summary Offences Act, enacted when then Premier Don Dunstan inaugurated nude bathing at Maslin’s Beach in 1975.

Here is my take on likely law enforcement scenarios for the coming summer: Will police move to arrest anyone who, on a public beach in Australia, removes her top before sunbaking face down? No. Will they ask her to cover up should she turn on her back? Only if someone on the beach complains. Will they arrest her? No. Will they move to intervene if a young man decides to do a naked streak through a children’s game of beach cricket on a crowded seashore on Australia Day? Yes. Will they arrest and lay charges? No. Will they provide a towel to him and offer the sage advice that he needs to alter his behaviour immediately? Yes.

Are we becoming more or less prudish in our beach conduct? Are we more or less prudish than beach-goers in international settings? I will leave those questions for the sociologists. I simply observe, from my considerable experience on Australian beaches over the past 50 years, that we do take our modesty seriously, and do not deliberately seek to offend those who may be more modest.

Finally, will discreet topless bathing continue through this summer on most Australian beaches without social and legal consequences? Most certainly.