As the festival season ramps up this summer, so has the ecstasy death toll. There have now been five deaths that might have been preventable if people knew what was in the drugs they were taking.

This has led to a flurry of calls for governments to introduce pill testing by specialists at festivals. What many people might not know is they can already legally purchase reagent test kits to test their drugs at home (although possession of the drugs is still illegal). So, do at-home test kits work?

Reagents are chemicals that react with a small sample of the drug being tested by changing colour. The most well known reagents are marquis, mandelin and mecke. The colour change indicates what might be in the drug (which you can check on a chart that comes with the kit).

The kits can be legally sold and purchased as a single use test, and makers report sales have increased by 110% in the past year.

However many of these products are not well labelled. For example, the ketamine reagent kit is actually mandelin, which is quite good for testing ecstasy, but not as good for testing ketamine. The actual reagent chemicals can be purchased for testing multiple samples. This is also legal, and much cheaper.

In 2017 I was volunteering at a large multi-day Victorian festival, camping with academic colleagues. Having brought reagent testing equipment, when people came to our camp site asking if we’d like to buy drugs, we said “perhaps, but would you mind us testing it first?” Within 24 hours we had identified the dangerous drug PMA.

We contacted the festival emergency controller. Being an ex-law enforcement official, he knew instructing people to test other people’s drugs would be illegal since the drug testers would momentarily be in possession of an illegal drug. Nonetheless, he didn’t want deaths on his hands and so instructed us to set up a covert pill testing station.

Read more: Yes, we can do on-the-spot drug testing quickly and safely

Several concerned members of the community volunteered to handle the illegal drugs brought to the covert pill testing station, all knowing full well they would be breaking the law. Within 48 hours 139 samples had been tested. We suspected a number contained Nbome, an adulterant found in ecstasy capsules that killed several people in Melbourne only weeks earlier.

Most people whose drugs were tested that we suspected were from this batch simply put these drugs in the bin. A volunteer sent one such discarded sample to a testing service overseas that confirmed what we suspected.

The limitations of reagents

Reagent testing is rudimentary at best, but it can identify potentiality fatal adulterants in ecstasy such as PMA and Nbome. However, just because a test shows that a sample contains MDMA, the chemical name for ecstasy, the sample could also contain other dangerous chemicals. This is further complicated given nearly 500 new drugs have been identified in the past few years.

Accuracy can be improved by using at least two reagents and triangulating the data. That is, each reagent turns a different colour depending on the drug it is exposed to, so if you do it twice with two different reagents you’ll get a better idea of what the drug contains.

The covert operation in 2017 involved at least three reagents. Nonetheless, we could only speculate the drugs were from the same batch as those that killed several people in Melbourne weeks earlier because the colour pattern we were seeing didn’t show up on the chart. 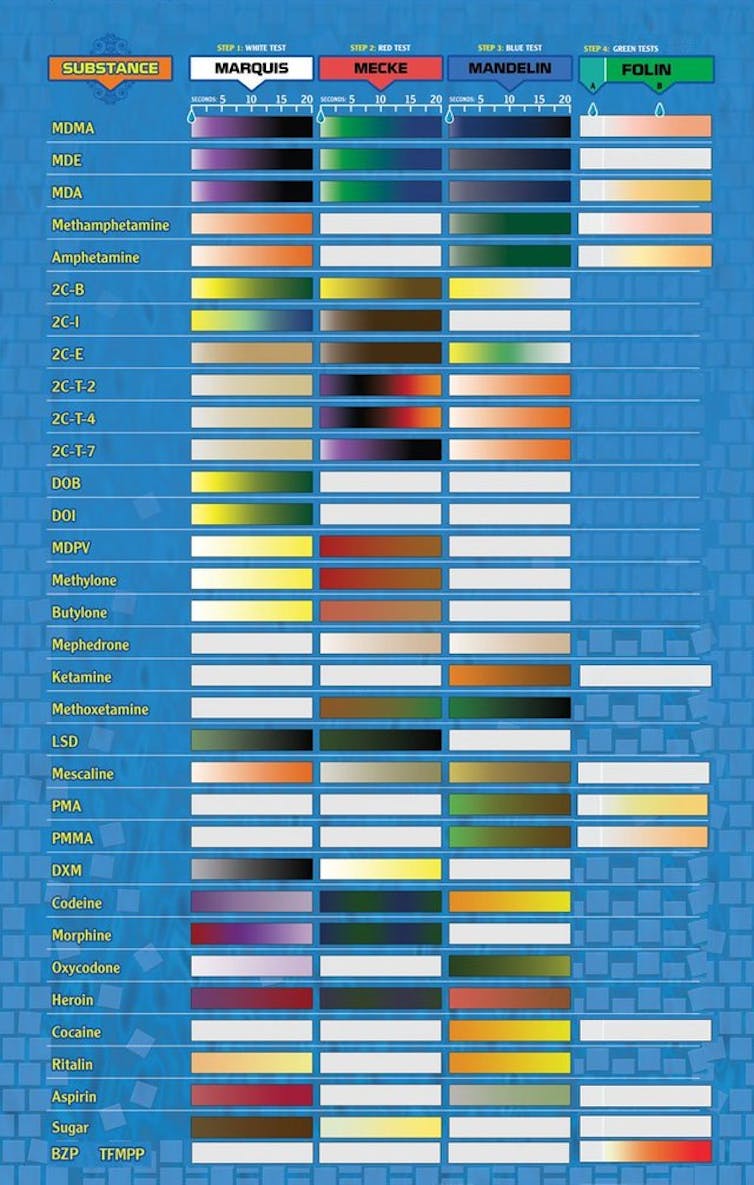 www.dancesafe.org Had we had access to the internet, we could have downloaded more up-to-date information. For example, The Bunk Police have an app that provides people with access to an extensive library of videos showing the various reagent reactions of hundreds of drugs. More rigorous pill testing Given the limitations of reagent testing, many are advocating for more sophisticated technologies. The first and only sanctioned trial of pill testing in Australia used infrared spectroscopy. This technology can quickly identify all known chemicals. It also provides an indication of the purity of each chemical. Of 83 samples provided for analysis, two contained N-Ethylpentylone, a drug that has only recently emerged. It has caused deaths and “mass casualty overdoses”. Where very high purity MDMA was identified, people were advised to take lower doses to avoid overdosing. This trial occurred in the Australian Capital Territory, which is unique since health-care professionals are able to handle illegal drugs for the purposes of analysis. Legislative changes would need to be made to allow sanctioned pill testing to be provided in other states - or at least some form of government support would be needed to run a one-off trial. Read more: Six reasons Australia should pilot 'pill testing' party drugs In the meantime… While politicians continue to debate whether more sophisticated pill testing should be implemented in Australia, I recommend people use reagent testing. And so do Students for Sensible Drug Policy (SSDP), a grassroots network of young people campaigning for drug policy reform. The University of Melbourne Chapter of SSDP provides students with free access to reagent test kits. Meanwhile, I helped the Edith Cowan University (ECU) student guild in collaboration with the ECU chapter of SSDP, to provide students with information on how to maximise the utility of reagent test kits along with free kits in October last year. For more accurate information, people can send their drugs overseas to services such as Energy Control or Ecstasy Data. For a small fee they use sophisticated technologies to allow people to anonymously find out what’s in their drugs. However, mailing illegal drugs involves breaking the law and the turnaround time means people have to plan their drug use well in advance.