What kind of world are we leaving for our children? So goes our conversation everywhere these days, it seems, as our planet overheats and burns in winter as well as summer, coral and other species die in alarming numbers, glaciers melt and seas rise, sending more and more people on the move. What world might we leave at all?

Dust, Dancenorth’s new show currently playing in the Sydney Festival, is a reflection on the world our children will inherit – although not in any didactic way. The show, inspired by the birth of co-choreographers Kyle Page and Amber Haines’s son in 2017, is cohesive and yet leaves room for the poetic, exploring a world on the brink of turning back into dust. 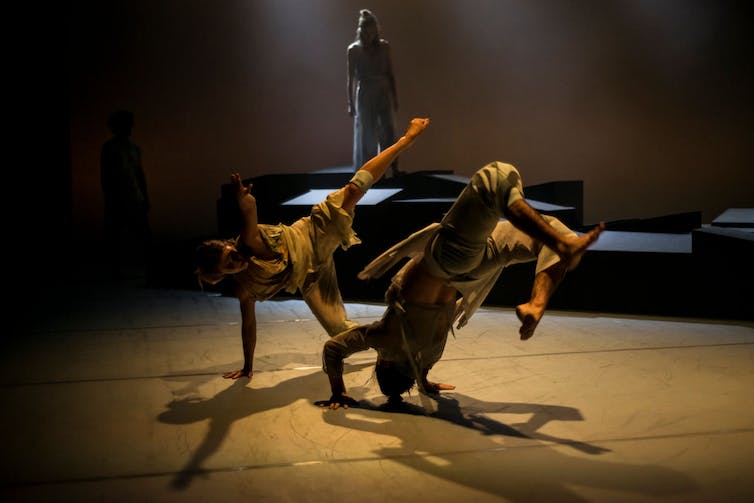 Dust is cohesive and yet leaves room for the poetic. Pippa Samaya

Beautiful costumes by Harriet Oxley wrap the seven dancers in artfully dyed and sweat-soiled layers of cloth, seeming at times like crumpled paper, or the last shreds of social life clinging to our backs. A monolithic wall, designed by Liminal Spaces and lit by Nicklas Pajanti, intersects the space.

Over the course of an hour and a half, the wall unpacks and reforms into an enclosure, an ex-closure, a dividing wedge, a destroyed urban skyline, a road, and a boat lost at sea. A deep, electronic ostinato grows, augmented and manipulated by the live performance of Canadian violinist Jessica Moss with co-composer Alisdair Macindoe.

This is big-scale theatre with big aims. Dramaturgically, scenographically, and choreographically, Dust employs all elements at its disposal and knits them together in a satisfying way.

Dancenorth, a relatively small dance company based in far-north Queensland, should be commended on this big vision – they are making work equal in scope and polish to many of the big dance companies from “down south”, with a fraction of the resources. Since artistic director Page took on the company three years ago, Dancenorth has managed to create a buzz among audiences and the dance community alike.

As always, however, the big issues can be as congested as the M4 in peak-hour. As much as I enjoyed Dust, I also left with a lingering feeling of its … competence.

“Competency” is hardly a bad thing to achieve, but in the case of contemporary art, where the aim is always to find something new, I can’t help but acknowledge that there is a lot of pseudo-post-apocalyptic dance going around lately. Casts of dancers in muted, dusty colours, versions of pants and tops somewhere between martial arts uniforms (the timelessness of tradition) and abstracted landscape (beyond society as we know it) are not unique to this performance. 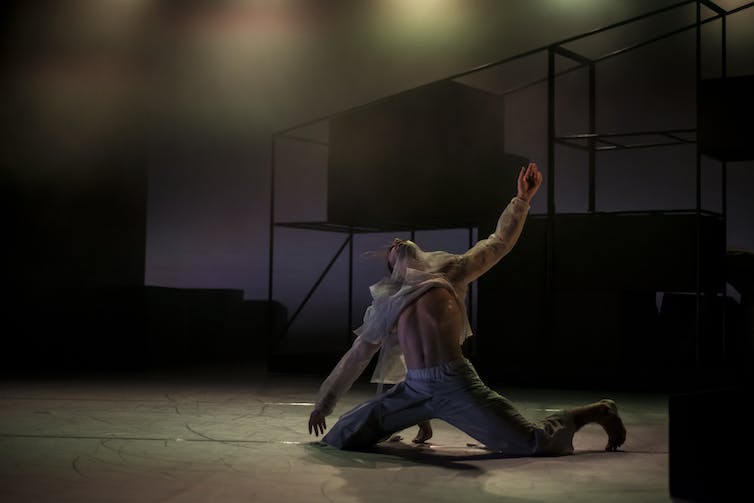 Dancenorth has managed to create a buzz among audiences and the dance community. Pippa Samaya

The movement itself is likewise familiar, even nostalgic, reminding me of choreographic strategies that were in vogue in the 1990s. For example, the sequence where highly articulate dancer Samantha Hines, inert and exhausted, manipulates hand, then chin, shoulder and hip each at a turn, in a moment of auto-puppetry.

This is not surprising, as both Kyle Page and Amber Haines cut their teeth as dancers with well-known Australian companies Chunky Move (under director Gideon Obarzanek) and Australian Dance Theatre (with director Garry Stewart).

Movement characteristic of these “schools” (if we can call them that) is evident in the extensive use of the floor and fluidity moving to and from the floor, the incorporation of street styles such as popping with release-based contemporary dance and even balletic movements, and the fluctuating speed changes and reversals like a DJ’s scratches embodied.

It is, in fact, heartening to see this next generation of Australian choreographers taking on our companies, rather than directors being imported from overseas as boards succumb to cultural cringe.

If this talk of familiarity sounds damning, I don’t mean it to be. The dancers are great, approaching their performances with intensity and deftness. Standout moments included Ashley McLellan’s opening solo, vulnerable and barely there one minute, insistent the next. I was taken up by this world that the dancers, along with all the creative team, made manifest on stage. 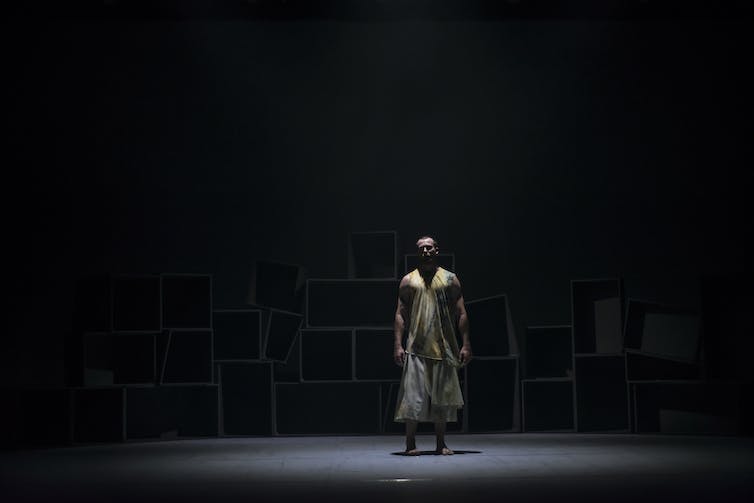 The dancers in Dust approach their performances with intensity and deftness. Pippa Samaya

Even more importantly, the show gave me more than enough to prompt my own flow of meanings and connections, drawn out from the daily fodder of news, social media likes (and un-likes), public transport chatter, etcetera, from the world around me. I confess I went to see Dust uninformed, by design – I didn’t read the program notes, or the Festival’s promotional material.

I was rewarded with an inundation of images: an early duo in which the dancers pause arms up in a hug but fail to reach one another, faces impassive, unable to touch another; Felix Sampson stuttering and trembling, air in short supply; the full ensemble traversing an uneven road, to end, nowhere, boxed in a cluster of futile half gestures.

That same box becomes a small boat lost in high seas, with Georgia Rudd and Ashley McLellan tossed adrift; a chaotic riot under yellow light gives way to a citadel centre stage; dancers open and close their mouths in a language that is only noise; the sound of drones overhead – we are caught up in a whirlwind.

This is, in the end, what theatre should do. It helps us make sense of our world, giving emotive, possibly, and also poetic, intellectual, political shape to the small and big, individual and communal issues of life.

The ending of Dust remains unclear. I counted at least five possibilities in the last fifteen minutes. But choosing which image to leave us with is a daunting task; after all, what world will we be leaving to our children?