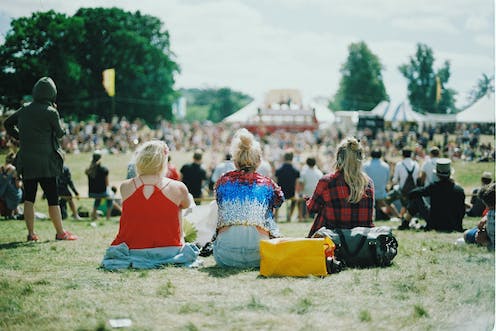 No, it's not mostly unemployed people who dropped out of school.Aranxa Esteve

To demonstrate the failure of the war on drugs, NSW Greens MP Cate Faehrmann came out this week about her own drug use:

To demonstrate the failure of the war on drugs, NSW Greens MP Cate Faehrmann came out this week about her own drug use:

Since my 20s, I’ve occasionally taken MDMA [ecstasy] at dance parties and music festivals. I know journalists, tradies, lawyers, public servants, doctors, police and yes, politicians (most well into their forties), who have done the same.

But what about the rest of Australia?

Nearly half have tried drugs

Some 43% of Australians aged 14 years or over have used an illicit drug at least once in their lifetime.

Nearly 16% have used an illicit drug at least once in the last year; around 75% of those use infrequently, between once and 11 times a year.

By far the majority of both lifetime and recent use is of cannabis (around 35% lifetime use), with other drugs such as ecstasy (MDMA) (around 11%), hallucinogens (around 9.5%) and cocaine (around 9%) much less commonly tried. Methamphetamine (including “ice”) is the fifth most commonly used drug at around 6% lifetime use.

Read more: Drug use can have social benefits, and acknowledging this could improve rehabilitation

Most people who try drugs typically do so for a short period in their lives (mostly in their 20s). There is natural attrition over time, probably as people gain more responsibilities, at work and home, which are incompatible with drug use.

Recent illicit drug use among teens has been in decline over the last eight to ten years, and has remained stable among people in their 20s.

In all age groups, men tend to have a higher rate of both lifetime and recent use than women.

People in the paid workforce have a higher rate of lifetime drug use (51%) than unemployed people (43%).

About 45% of people in paid employment say they have used cannabis in their lifetime, compared to 39% of unemployed people. For ecstasy it’s 15% and 12% respectively.

Illicit drug use is reasonably equally distributed across socioeconomic groups, but the most advantaged tend to have a higher lifetime use (44% compared to 39%) and the more socially disadvantaged have a slightly higher rate of recent use (16% compared to 14%).

This suggests those who are more advantaged are more likely to try drugs but less likely to continue to use them.

There are no recent published analyses of which occupational groups tend to have higher rates of lifetime use. The last analysis was from 2004 data and only looked at use in the last 12 months. That data showed workers in hospitality (32%), construction (24%) and retail (20%) had the highest rate of recent use.