As New Zealanders are enjoying their days at the beach, unusually warm ocean temperatures look to be a harbinger of another marine heatwave.

Despite the exceptional conditions during last year’s heatwave in the Tasman Sea, this summer’s sea surface temperatures to the north and east of New Zealand are even warmer.

The latest NIWA climate assessment shows that sea surface temperatures in coastal waters around New Zealand are well above average. Marine heatwave conditions are already occurring in parts of the Tasman Sea and the ocean around New Zealand and looking to become the new normal.

Changing sea surface temperature anomalies (conditions compared to average) in the oceans around New Zealand during the first two weeks of January - comparing 2009 to 2019. Source: NIWA

What’s in a name

Currently, marine heatwaves are defined as periods that last for five or more days with temperatures warmer than the 90th percentile based on a 30-year historical baseline. Given we are likely to experience many more such events as the oceans continue to warm, it is time to understand and categorise the intensity of marine heat.

The names Hurricane Katrina, tropical cyclone Giselle (which sank the ferry Wahine 50 years ago), tropical cyclone Winston give a malevolent personality to geophysical phenomena. Importantly they get graded into categories, so we can rapidly assess their potential impact.

An Australian team has developed a classification scheme for marine heatwaves. The team used an approach similar to that used for hurricanes and cyclones – changing conditions can be slotted into to a sequence of categories. At the moment it looks like we are in marine heat wave category one conditions, but potentially entering category two if it continues to warm.

Turning the heat up on marine life

A marine heatwave is potentially devastating for marine ecosystems. It is also an indication that the hidden buffer in the climate system – the fact that the oceans have absorbed 93% of the excess heat – is starting to change. Individual warm seasons have always occurred, but in future there will be more of them and they will keep getting warmer.

The Great Barrier Reef has already been hit hard by a succession of marine heatwave events, bleaching the iconic corals and changing the structure of the ecosystem it supports.

Further south, off Tasmania’s east coast, a number of species that normally occur in tropical waters have extended their range further south. A number of fish species, lobster and octopus species have also taken up residence along the Tasmanian coast, displacing some of the species that call this coast home. Mobile species can escape the warmer temperatures, but sedentary plants and animals are hardest hit.

In New Zealand, aquaculture industries will find it more difficult to grow fish or mussels as coastal waters continue to warm. If the same trends seen off Tasmania occur here, areas with substantial kelp canopies will struggle and start to be replaced by species normally seen further north. But the impacts will likely be very variable because the warming will be heavily influenced by wind and ocean currents and different locations will feel changes to a greater or lesser extent. 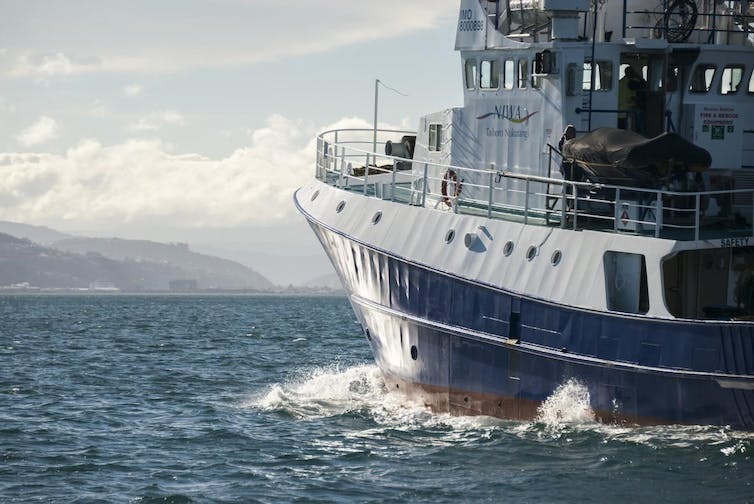 As important as it is to identify a marine heatwave at the time, reliable predictions of developing conditions would help fishers, aquaculture companies and local authorities – and in fact anyone living and working around the ocean.

Seasonal forecasting a few months ahead is difficult. It falls between weather and climate predictions. In a collaboration between the National Institute of Water and Atmospheric Research and the Australian Bureau of Meteorology, we are examining how well long-term forecasts of ocean conditions around New Zealand stack up. Early forecasts suggested this summer would not be as warm as last year. But it now looks like this summer will again be very warm in the ocean.

Read more: This summer's sea temperatures were the hottest on record for Australia: here’s why

One of the important points to keep in mind is that when we are at the beach, we are sampling only the surface temperature. The same is true of satellites – they monitor less than the top millimetre of the ocean.

Sea surface temperatures are several degrees above normal at the moment. But in deeper waters, because of the high heat content of water, even a tenth of a degree is significant. Temperature in the deeper ocean is monitored by a network of moored buoys on and off the continental shelf along the Australian coast. New Zealand has almost nothing that would be comparable.

What we can look to, in the absence of moored buoys, is a fleet of ocean robots that monitor temperature in real time. Argo floats drift with ocean currents, sink to two kilometres every ten days and then collect data as they return to the surface.

These data allowed us to identify that the 2017/18 marine heatwave around New Zealand remained shallow. Most of the warmer water was in the upper 30 metres. Looking at the present summer conditions, one Argo robot off New Zealand’s west coast shows it is almost four degrees above normal in the upper 40 metres of the ocean. On the east coast, near the Chatham Islands, another float shows warmed layers to 20 metres deep. To the south, the warming goes deeper, down to almost 80 metres.

Our work using the Australian Bureau of Meteorology forecast model highlights how variable the ocean around New Zealand is. Different issues emerge in different regions, even if they are geographically close.

The research on categories of marine heatwaves shows we will have to keep shifting what we regard as a heat wave as the ocean continues to warm. None of this should come as a surprise. We have known for some time that the world’s oceans are storing most of the additional heat and the impacts of a warming ocean will be serious.