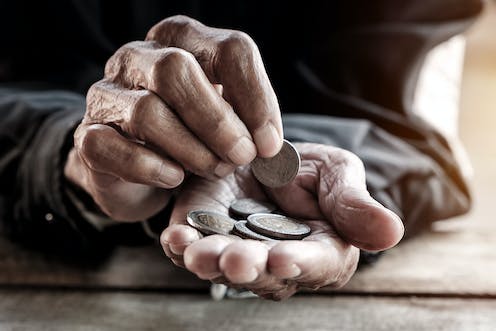 To find out more about the characteristics of bankrupts, as part of the University of Melbourne’s Personal Insolvency Project we have drawn on data about more than 28,000 bankruptcies commenced between July 2007 and June 2016.

Our findings illustrate the contrasting financial fortunes of older Australians. While many are “asset rich” and carry little or no debt, some have few assets and are highly indebted.

Read more: The financially well-off defy the stereotypes. They include retirees, and mortgagees

Older bankrupts, like older Australians generally, have lower incomes compared to other age groups. Where they differ from their peers is having no significant assets. In particular, fewer than one in ten own real estate, compared with three-quarters of all older Australians owning their homes outright.

The low rate of home ownership among bankrupts may be because people who are more financially vulnerable are less likely to buy real estate in the first place.

It is also possible that not owning property makes the consequences more palatable. Once a court declares you cannot pay your debts, a trustee can sell all your assets, including your home, to pay creditors. That’s less of a worry for someone without assets.

But the low rate may also reflect the fact that real estate constitutes a valuable financial safety net, particularly in times of escalating property prices (which also drives up rental costs).

Credit card debt is most common among older bankrupts; 80% have such debt, with more than 40% owing more than A$20,000; 37% identify excessive use of credit as the primary cause of bankruptcy.

This compares with 22-25% among the other age cohorts. Among bankrupts, debt levels plateau for people in their forties, fifties and early sixties and begin to decline after the age of 65.

Other leading causes of bankruptcy among older debtors are ill health (nominated by 17% of debtors aged 55 or older) and unemployment.

These findings raise obvious questions about lending and credit practices that have enabled people on low incomes with few liquid assets to get into debt. This includes pensioners and those on the cusp of retirement whose incomes are likely to decline.

The research points to older people making up an increasing percentage of the bankrupt population. This is due to the expected decline in home ownership rates among older Australians, the ageing of the population generally and younger people taking advantage of alternatives to bankruptcy.

The adequacy of Australians’ retirement savings has recently been in the spotlight. Several major reforms to the superannuation system have been proposed, including by the Labor Party and former Australian prime minister Paul Keating.

Read more: Why we should worry less about retirement - and leave super at 9.5%

Our findings suggest that bankruptcy among older Australians could be reduced through targeted changes to government benefits, such as an increase to the Commonwealth Rent Assistance supplement.