Southern Cross Housing, a non-profit community housing provider, took over management of just under 1,000 public housing dwellings on the New South Wales South Coast last October. This transfer from the NSW Department of Family and Community Services nearly doubled Southern Cross’s portfolio. More than 3,000 transfers have since been made to community housing providers on the NSW North Coast and in northern Sydney.

These are the first of over 14,000 tenancies being contracted out to community housing providers over coming months. The “whole-of-location” transfer program will result in the department closing housing offices in four regions. Non-government organisations will manage all government housing assistance programs in these regions.

This is not an entirely new development. Nationally, community providers were responsible for about 20% of 400,000 social housing dwellings in 2016. Most are managed under contract for state authorities, which retain ownership of the properties.

The current transfers represent a major acceleration in the growth of community housing providers’ share of the social housing sector. It will bring NSW to within a few points of the 35% target agreed by the Housing Ministers’ Council in 2009. This will be achieved in the next few years with transfers resulting from large estate redevelopment projects.

Read more: We still live here: public housing tenants fight for their place in the city

It is the first time a state government housing agency has effectively contracted out the entirety of its operations, albeit in particular regions. Rents collected will fund the management of all housing programs in these areas.

By transferring management to Community Housing Providers … we are harnessing over $1 billion of additional funding over 20 years that will improve the experience of people living in social housing. I am delighted that, as part of the transfer, tenants will have the support and services they need to improve their lives.

So where is the extra money coming from?

The extra A$1 billion represents Commonwealth funds that will be captured by the NSW social housing system without appearing in either state or federal budgets. This results from an anomaly in federal income security arrangements: very low-income community housing tenants can receive up to about $67 per week (singles) in Commonwealth Rent Assistance (CRA), whereas public housing tenants are not eligible for this benefit.

Public housing rents are calculated at 25% of income (or market rent if this is lower). But community housing organisations can add the entire amount of CRA received by the tenant to this figure. This effectively increases the rent payable for a single pensioner by up to 70%.

Under changes in the law in 2016 tenants have no option but to accept the changes. If a tenant delays or fails to apply for CRA for any reason they are deemed to be receiving it and their rent correspondingly adjusted.

What about the housing maintenance backlog?

According to the Productivity Commission, in 2016 more than a quarter of public housing dwellings in NSW failed to meet a basic standard of functionality and structural integrity. This was the worst result of any state.

It is highly likely that the transferred properties carry a substantial backlog of maintenance and repairs. The cost of this work will be effectively shifted to the federal government. However, as CRA is an income security entitlement, this will not appear as housing expenditure in the federal budget. 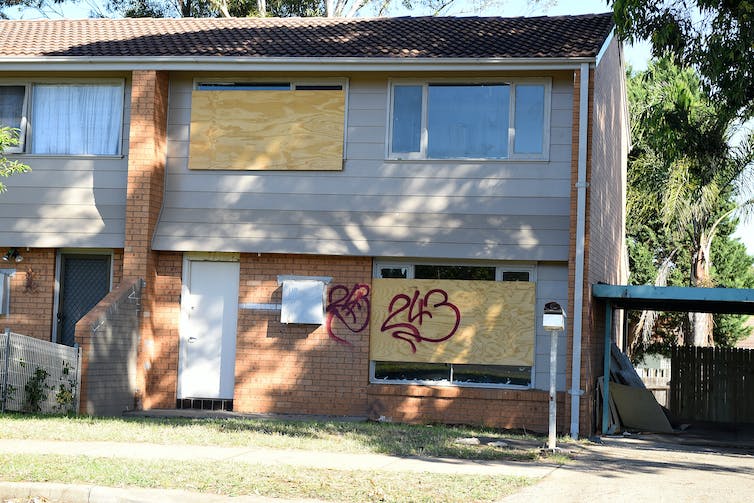 Attending to the backlog of public housing maintenance and repairs is likely to be a costly exercise. Dan Himbrechts/AAP

Maintenance issues are the most common reason for complaints and tenant dissatisfaction, so tenants will welcome more spending on maintenance. However, community providers are required to use the government’s existing maintenance contractors at least until contracts expire.

Providers contend that higher staff-to-tenant ratios will lead to more humanised management and greater responsiveness to individual tenants’ needs. This claim will be tested against the fact that the community providers are dramatically expanding their portfolios and scope of operations, and will absorb many displaced department staff.

For some tenants it appears more local “hands-on” management is not always experienced as a positive. Analysis of NSW Civil and Administrative Tribunal (NCAT) data sourced by advocates somewhat surprisingly reveals that community providers are heavily over-represented in taking tenants to the tribunal. At the same time, the break-up of management among many providers will limit the possibility of moving or swapping houses for employment or family reasons.

In the UK and Europe, non-profit housing organisations are now the major developers of new social housing. They do this by borrowing against their assets and partnering with the development industry.

Australian community housing managers have long argued that they should be given freehold title to state properties. In theory, this would enable them to borrow and provide extra social housing stock without adding to public debt.

So, rather than adding to social housing supply, the marked growth of the community housing sector over the last decade has been almost entirely at the expense of public housing. Australia’s population increased by 12.6% between 2011 and 2016. The number of social housing dwellings (public and community housing) grew by less than 3% in that time. Most of that growth resulted from federal stimulus funding during the global financial crisis.

The current program in NSW excludes any expectation that providers will leverage additional income to develop new housing. 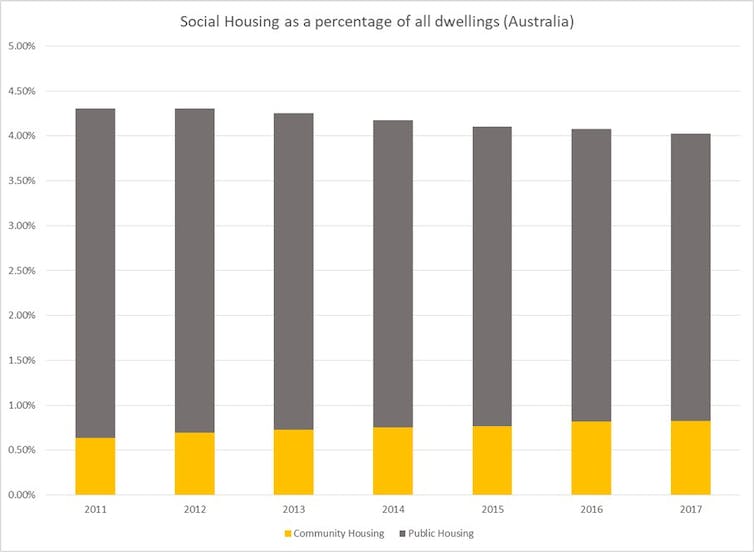 In 2013 the Australian Housing and Urban Research Institute published a comprehensive analysis of social housing transfers. The report concluded that potential benefits included maximising revenue, improving services and leveraging growth. However, it noted that “there has been an unrealistic loading of objectives onto this one policy mechanism”.

The authors called for a clearer and more realistic rationale for housing transfers and better opportunities for tenants to be involved in shaping the outcome.

Five years on it is apparent that revenue is the key driver at the expense of increased supply and tenant choice or voice. Support for the growth of community housing has been restated in the new National Housing and Homelessness Agreement where it appears as a national priority area.

In NSW, a wide range of former government responsibilities and access to a Commonwealth-funded revenue stream have been handed over without the accountability and grant management mechanisms that traditionally apply to community-based service providers. Tenants are expected to apply for federal funds on behalf of the state social housing system and bear a significant cost if they don’t comply.